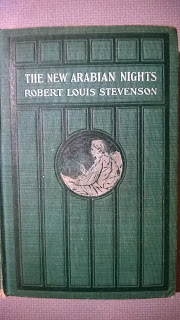 Robert Louis Stevenson of course remains a very famous writer, with a reputation skewed slightly towards books for younger readers, like Treasure Island, Kidnapped, and The Child's Garden of Verses; though of course his adult horror story The Strange Tale of Dr. Jekyll and Mr. Hyde remains very popular as well. This is somewhat unfair, and it's partly due to the disdain of the modernists, notably Virginia Woolf, whose criticism led to a distinct dimming of his literary reputation, though he has been (justly) rehabilitated somewhat in more recent decades.

He was famous as well for his somewhat dramatic biography. He was born in Edinburgh in 1850 to a family of lighthouse engineers. He somewhat disappointed his father by not taking to engineering, though he did eventually take a law degree, even though he never practiced. He was sickly his entire life (at the time, tuberculosis was blamed, but more recently, Wikipedia says, other diseases like bronchiectasis and sarcoidisis have been proposed). He traveled widely, partly for his health. He married an American woman, ten years his senior, Fanny Van de Grift, and eventually moved to the United States, before finally moving to Samoa, which probably was ideal for his health. He was an advocate for independence for the Pacific Islanders, and was apparently very well-liked by his neighbors. His health eventually failed completely, and he died in 1894.

When a teen I read The Black Arrow, an historical novel set during the Wars of the Roses. It was one of my favorite books. Oddly enough I didn't read much else by Stevenson -- I did read, and enjoy, David Balfour, the sequel to Kidnapped (apparently better known everywhere but the U. S. as Catriona), and I read Dr. Jekyll and Mr. Hyde, but never Treasure Island nor Kidnapped. I knew of other well-regarded works like The Master of Ballantrae and the unfinished Weir of Hemiston, but again never read them. 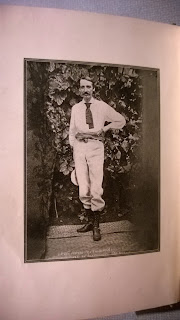 I ran across my copy of The New Arabian Nights at an antique mall recently. I had never heard of it. Turns out it's his first book of fiction -- it was published in 1882, comprising stories that appeared in magazines between 1877 and 1880. It has a fairly strong reputation. He put out another collection, unrelated except by title, called More New Arabian Nights, in collaboration with Fanny Van de Grift, in 1885. My edition is a 1906 reprint, the "Medallion Edition", octavo size, from Current Literature Publishing of New York. I have to say I like the habit of books of that era of including illustrations, even just author portraits as here. 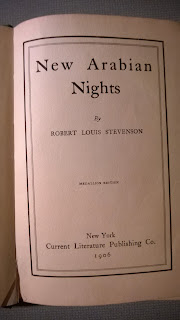 The "Arabian Nights" conceit comes from the first two sets of stories in the book, one group of three entitled "The Suicide Club", comprising "Story of the Young Man with the Cream Tarts", "Story of the Physician and the Saratoga Trunk", and "The Adventure of the Hansom Cab", and another group of four called "The Rajah's Diamond", comprising "Story of the Bandbox", "Story of the Young Man in Holy Orders", "The Story of the House with the Green Blinds", and "Adventure of Prince Florizel and the Detective". These are linked stories, each ending with a postscript from "my Arabian author", perhaps telling of the final fate of a major character, and also hinting that the reader might want to continue to the next stories. All the stories feature Prince Florizel of Bohemia and his Master of the Horse, Colonel Geraldine. Prince Florizel is accomplished, rich, and very well liked, but on occasion he and the Colonel, out of a taste for more adventure, go in disguise to low places.

The three stories about "The Suicide Club" open with the Prince and the Colonel meeting a young man who despairs of his life, and who invites the two men to join the title club, which he himself has just joined. There are several members of the club, and each time they meet they choose by lot one member to be killed, and one member to do the killing. (All members have sworn to accept this lot (they are all tired of life anyway), and to keep things secret.) The Prince realizes of course that this is an evil thing, and that the Club's leader, the one man who is exempt from the lotteries, is actually acting for his own ghoulish entertainment. In the first story, the man who invited the Prince to join the Club is chosen as the "murderer", and the Prince acts to save him from the consequences of his murder and to unmask the President of the Club, who escapes to Paris, where Colonel Geraldine's brother vows to go to find him. In the second story, an American in Paris is inveigled into a relationship with a woman of questionable morals, who it turns out is in league with the President of the Suicide Club -- they have a rather grisly use for the American's huge Saratoga Trunk. In the third, Prince Florizel finally tracks down the President and puts and end to his career.

"The Rajah's Diamond" concerns the unpleasant General Vandaleur, who has been given a diamond by an Indian Rajah for his service in that country. The diamond proves sufficient to lure get the General a beautiful wife, but she soon tires of him, and he tires of her spendthrift ways, not to mention her encouragement of the rather feminine and useless Harry Hartley as her sycophant. Lady Vandeleur finally decides to sell her jewels, with the diamond, to get more money after her husband refuses to continue to pay her bills, and she sends Harry on that errand, but he proves unequal to the task, and loses most of the jewels. In the next tales, the diamonds, stolen by a gardener, ends up with a less than honest young clergyman, who, in looking for a way to safely get rid of the diamond, encounters, the General's equally unpleasant, and estranged, brother. The two become accomplices, but hardly happy ones. There is an episode with a poor young man who is offered a good deal of money if only he will agree come to Paris at a certain night and attend a play, and also to marry the woman chosen by his benefactor (who turns out to be his illegitimate father) ... Obviously something funny is going on, and Prince Florizel, in the end, helps set things straight.

These are both enjoyable story cycles. The Prince is an amusing character (with an amusing final career). The various hapless young men who get involved are a bit less convincing, and the way things turn out reasonably well for them seems a bit undeserved and perhaps implausible on occasion. The plots are driven by a certain degree of coincidence, to be sure. But they are fun.

There are four further stories, all unrelated. "The Pavilion on the Links" is a long story (25,000 or more words) about a man who encounters an old acquaintance at a secluded pavilion in the Scottish linksland (I confess I thought "the Links" meant a golf course, but instead it means the seaside land where many of the greatest Scottish golf courses are placed; and "links" must mean something like land linking the inland to the sea, instead of the links between one golf hole and the next). His acquaintance, a less than pleasant man, seems to be up to something -- he's accompanied by a beautiful young woman and by her father. It turns out the father is a criminal who caused a bank to fail, and made off with the remaining funds, and he's being pursued by Italians related to Garibaldi ... The hero falls in love with the young woman, which enrages his acquaintance who wants her for himself, but all must band together to save the others from the Italians.

The other three are set in France. "A Lodging for the Night" is about Francis Villon, and portrays him as a decidedly nasty man, on the run after his involvement with the murder of a fellow thief, himself destitute after his other fellows have robbed him, desperately looking for shelter on a snowy night. "The Sire de Maletroit's Door" is about a soldier who by accident ends up going through the title door, and being forced by the unpleasant Sire to marry his daughter, whom he believes has had her virtue compromised. And "Providence and the Guitar" is a lighthearted story about a French man and his wife, traveling musicians, and their troubles in a small town where the Commissaire is corrupt and the residents ungenerous, until they meet an unhappy couple (the wife wants the husband to get a real job).

Stevenson is known as one of the progenitors of what is called "the Age of the Storytellers", and this collection of stories supports that -- they are all enjoyable, full of adventure, and engagingly told.
Posted by Rich Horton at 7:40 AM