Hello Summer Goodbye (and I Remember Pallahaxi), by Michael Coney 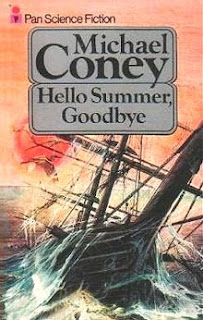 Hello Summer, Goodbye came out in the UK from Gollancz in 1975. It was later published in the US (by DAW) as Rax, and in Canada as Pallahaxi Tide. Coney wrote a sequel to it, I Remember Pallahaxi, but was not able to publish it. When he was diagnosed with terminal cancer in 2005, he placed three novels and some short stories on his website, including I Remember Pallahaxi. It was published in hardcover by PS Publishing after Coney's death. 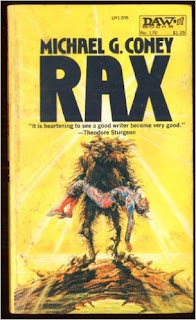 Michael G. Coney (1932-2005) was born and raised in the UK but spent about the last half of his life in Canada. He published a great many stories and novels from about 1969 through the early 80s, then fell mostly silent: after 1984 there were a pair of novels in 1988 and 1989, and a new spate of stories in the mid-90s, mostly in F&SF, with a couple of later stories in Spectrum SF. He was a colorful writer, notably influenced, it seems to me, by Cordwainer Smith and Jack Vance. Many of my favorites among his stories were those set on the "Peninsula", a touristy area a bit reminiscent of J. G. Ballard's Vermilion Sands or Lee Killough's Aventine. He was a very fine writer, of just that sort of quiet accomplishment to doom him to obscurity even as he was often praised ...  and it seems to me that after his death his reputation has only receded.

Hello Summer, Goodbye concerns Drove, a teenaged boy on an alien planet. (He seems very human, but eventually we learn that his species is humanoid but not exactly human.) His family summers at the coastal town of Pallahaxi. At Pallahaxi Drove hopes to meet again the girl he met the previous summer, Browneyes. But Browneyes is an innkeeper's daughter -- too lower-class for Drove's father's taste. Still, they do meet again, and they begin a sweet love affair. Their relationship is strongly affected by tensions between the Pallahaxi villagers and the government. The villagers are not enthusiastic supporters of an ongoing war, and they are suspicious of the government's motives in diverting supplies from Pallahaxi, and of their intentions for the weapons that are passing through town. All this is set against a backdrop of climate change caused by the planet's unusual orbit about its Sun and the effect of the large nearby planet Rax.

The SFnal color in the background includes interesting creatures such as ice-demons and the telepathic (or at least empathic) lorin; the apparently highly mutagenic environment of this planet; the somewhat exaggerated fear the natives have of cold; and some curious weather such as the grume -- a decidedly odd ocean current that comes every summer. Much of this is fascinating but scientifically difficult to take. I was reminded of Jack Vance in everything but the prose.

The novel comes to a rather unexpected climax, when the reason for the war and especially for the government's actions in Pallahaxi are revealed. They are quite surprising, and rather bitter in implication. Drove's sympathies of course align with the villagers and Browneyes, but his father forces him in another direction. The ending of the novel is deeply sad, but also somewhat ambiguous -- there is a hint of a possible sort of redemption for at least Drove. It is finally quite a beautiful bittersweet book.

The sequel, I Remember Pallahaxi, is set centuries in the future of Hello Summer, Goodbye. It explains the backstory and mysteries of that novel in a very satisfying and interesting fashion. (I have to suspect that Coney invented much of this after writing the first book -- though who knows! Though if he did have it all in mind when writing the first novel, he showed amazing restraint in concealing some neat ideas, including a rare example of actual real live Alien Space Bats.)

Right at the opening we learn that the narrator is a stilk -- humanoid but not human. Much is made of the differences between humans and stilks, most importantly the stilk ability to directly experience the memories of ancestors in their same sex line. The stilk with the longest memories is traditionally chief of his village -- or of hers. Males and females live separately, coming together only to mate.

The hero is Hardy, the nephew of his village's chief. Their family has a tradition that their memories go back all the way to the legendary founders of stilk society, Drove and Browneyes. Hardy soon meets a girl, Charm, from a fishing village, thus not considered an appropriate mate. To complicate things, they realize they love each other enough to want to live together -- much like Hardy's father and mother, who do not actually live together but who pervertedly see each other again and again and feel continued affection.

The novel’s plot turns immediately on Hardy’s father’s murder, but more importantly on the coming climate change -- it seems that the dead planet Rax is once again claiming their world, threatening another long freeze and starvation. But this time, the situation is complicated by the presence of humans, who have traded with the locals for mining rights. The humans, however, refuse to help with the freeze, citing the Prime Directive (not called that, of course). Stilk society begins to fall apart. And Hardy and Charm begin to sense a great secret involving the telepathic lorin.

The resolution is largely as we begin to expect, though with some nice fillips. The love story of Charm and Hardy isn't quite is sweet as that of Drove and Browneyes, but it works. The various revealed mysteries are quite delightful, and also rather thought-provoking (and, in a way, ultimately perhaps tragic -- or perhaps not -- hence the "thought".) I enjoyed it -- if perhaps not quite as much as Hello Summer, Goodbye (the first novel’s heartbreaking sweetness is hard to top) and I am thrilled to see both novels back in print.
Posted by Rich Horton at 8:34 PM