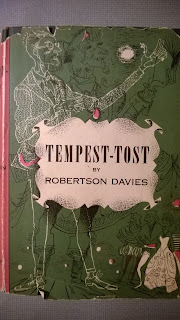 More Canlit! (After Michael Coney last week, and Frederick Niven and John Buchan not too long before that.) Robertson Davies of course is one of the most towering figures in 20th Century Canadian literature, and one of my favorite writers. As I recall I began reading him about when his novel What's Bred in the Bone appeared to a great deal of notice (and a place on the Booker Prize shortlist). I started, instead, with his second novel, Leaven of Malice, but soon read the rest of his work, including his most famous novel (Fifth Business, from 1969). My favorites among his work are Fifth Business and What's Bred in the Bone, which is probably a pretty standard view.

Unlike the other "Canadian" writers I've covered here, Davies was not born in the UK. He was born in Ontario in 1913. His father, William Rupert Davies, was a newspaperman, originally from Wales (as the name Davies suggests), who became a Senator late in life (and stayed on until his death at age 87). Robertson Davies grew up in Renfrew, Ontario, went to Queen's University in Kingston, then took a B. Litt. at Oxford, He spent a few years in England and Wales, acting (including some time at the legendary Old Vic), before returning to Canada to work in the family trade, journalism. He was literary editor at the Saturday Night, before becoming editor (later publisher) of the Peterborough Examiner (one of his father's papers). With his father and brother he owned papers in Peterborough and Kingston, as well as some radio and TV stations. He wrote books on acting, and in the late '40s he began writing plays, many quite well-received, such as Eros at Breakfast and At My Heart's Core. He also wrote a column (for the Examiner) of humorous observations under the name Samuel Marchbanks. These columns were collected in three books. (Along the way I've read all Davies' plays, the Marchbanks books, High Spirits, and his various collections of belles lettres -- all with a fair amount of enjoyment.)

That's a picture, already, of a very successful journalist and man of letters. He also had a major later career in academia, teaching literature at Trinity College of the University of Toronto from 1960 to 1981, and serving as Master of the University's graduate college, Massey College, from 1963. And he published a World Fantasy Award winning collection of ghost stories, High Spirits, that originated as stories he read at Christmas gatherings at Massey College. But of course none of those things are what he's really remembered for. Despite his deep love of the theater, and his family background in journalism, and his respect for higher education, his true calling was as a novelist.

Tempest-Tost was his first novel, published in 1951. It was quite successful as far as I can tell, though probably not a bestseller (except perhaps in Canada, as Brian Busby suggests). (My excuse for including it in this series of essays on Old Bestsellers is that Davies eventually produced official bestsellers: What's Bred in the Bone, for instance, peaked at 11th on the New York Times Bestseller list (that same week, Jean Auel's The Mammoth Hunters was number 1). As for it being "Forgotten" -- well, it isn't! But more attention for such a great writer is still good, and Tempest-Tost is one of his least known novels.) My copy of the book (or one of my copies) is the American First Edition, from Rinehart and Company in 1952. (The true first appeared from Clarke and Irwin in Canada.) I got this copy at the huge used book sale held every year at the West County Mall in St. Louis County ... it was one of the "Rare" books.

Tempest-Tost is set in the fictional town of Salterton, Ontario, home of Waverly University. (Presumably based on Kingston, home of Queens University.) The story is set around a production of The Tempest by the Salterton Little Theatre. It is to be directed by Salterton native Valentine Rich, who has become a successful director and actress on Broadway -- a coup for the leader of the Little Theatre, Valentine's childhood friend (or perhaps just acquaintance?) Nellie Forrester. The play is to be presented as a pastoral (i.e., outdoors), and they have inveigled the use of the grounds of a well-off widower named Webster, who has two daughters: precocious 14-year old Freddy, and beautiful 18-year old Griselda. (The unspoken payment for this is giving Griselda the part of Ariel.)

The novel's focus shifts between several characters -- Freddy, Griselda, Solly Bridgewater, and perhaps most importantly, Hector Mackilwraith. Hector is a math teacher, about 40 years old, a bachelor, who has been serving as the Little Theatre's business director for some time. He has a rather awful widowed mother (and his father was a rather awful minister before he died), and he's not really terribly interested in anything beyond math and an orderly life. But he decides he wants a part in The Tempest (a modest part, Gonzalo), and he is able to arrange this, despite a relative lack of talent. Much of the business of the novel revolves around the amusing aspects of putting on the play, and the silliness and self-importance of just about everyone involved (Valentine mostly excepted). But the real fulcrum of the novel is a love quadrangle (of sorts) that arises when Hector Mackilwraith, Solly Bridgewater, and the rather caddish but handsome Roger Tassett (who plays Ferdinand), all fall in love with Griselda. She has not too much interest, really, in any of them (save maybe Solly just a bit), but she plays along perhaps a bit too much. And Hector, who is quite a sad case, really, works himself up into a dreadful state over things.

It's a comedy, and a light comedy, so no real disasters result. But there are lots of nice set pieces, and plenty of witty writing. There is some cruelty, some of it, to my taste, overdone and perhaps unearned. (Noticeable are several quite awful mothers.) And the "good guys" are perhaps too easily marked (Valentine, Freddy, and Humphrey Cobbler, who is hired to do the music for the play). Davies always had a tendency to lecture just a bit, usually in a pretty old-fashioned way, and there was always enough truth in it to make it worthwhile (and the parts that seemed wrong, or humbuggish, to me were wrong in mostly the right way, or in a nice way) ... but his lectures here don't quite have the depth that those in later novels had. In the end it's a funny and quite enjoyable novel, if certainly a minor work in Davies' oeuvre -- a good start to a magnificent career but not a great work in itself.
Posted by Rich Horton at 8:15 PM