Yesterday was the 104th anniversary of Jack Vance's birth. Earlier today I posted a collection of reviews of some of his less well-known short fiction, and I can't resist also posting this look at the Ace Double editions -- in several permutations -- of  The Dragon Masters, The Last Castle, and The Five Gold Bands. 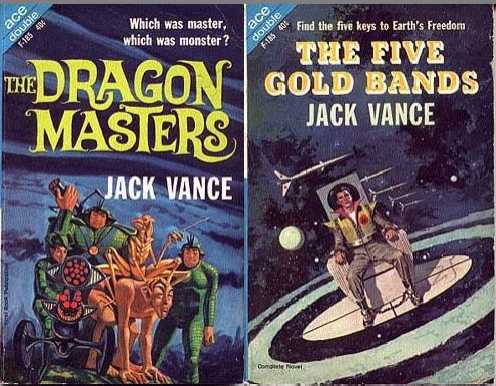 Jack Vance published quite a few stories as parts of Ace Doubles. Unusually, almost every Ace Double he appeared in featured one of his stories backed with another of his stories, as in this case. A total of 13 Ace Double halves were by Vance, in seven different books (not counting reissues of The Dragon Masters/The Five Gold Bands and Son of the Tree/The Houses of Iszm). The only author to be featured in an Ace Double with Vance was Tony Russell Wayman, whose World of the Sleeper was backed with The Last Castle in 1967. However, you don't need to sully your Vance collection with Wayman's work -- The Last Castle was later reissued in another Ace Double backed with The Dragon Masters. (Thus, The Dragon Masters was issued three times as an Ace Double, twice with The Five Gold Bands and once with The Last Castle.) Accounting for duplications, a total of 11 different Vance "books" were halves of Ace Doubles (including two story collections and a fixup).

The first Ace Double of The Dragon Masters backed with The Five Gold Bands was published in 1963. That year "The Dragon Masters", which had appeared in the August 1962 Galaxy, won the Hugo for Best Short Fiction. (The other contenders were stories by Leiber, Sturgeon, Swann, and, surprisingly enough, Gary Jennings.) The Dragon Masters, in the Ace edition (and I have no reason to believe this differs from the Galaxy publication), is about 34,000 words long. The Five Gold Bands is rather longer at some 44,000 words. It first appeared in the November 1950 Startling Stories. It was also published in 1953 in a paperback from an outfit called Toby Press, of which I had never heard, under the title The Space Pirate. This was his second book. The Toby Press edition is available from Abebooks for prices ranging from $15 to $100, with most prices in the $45 to $75 area. (This isn't nearly as expensive as Vance's first hardcover, also from 1953, the Winston Press edition of Vandals of the Void, which will run you at least $140 for a copy with dust jacket (as little as merely $75 w/o dj), and as much as $375.) 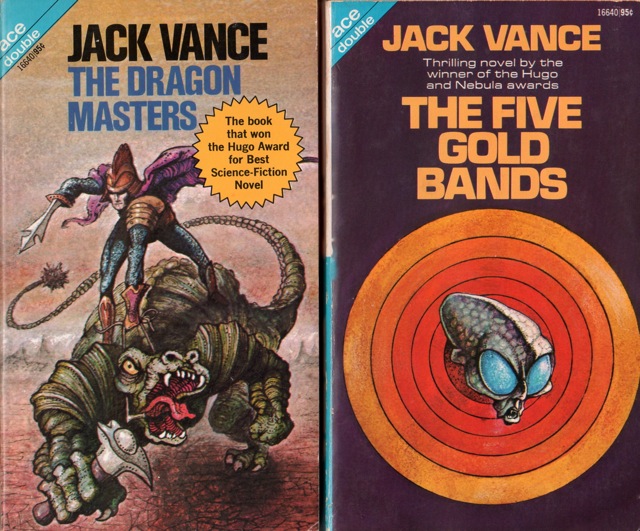 The Five Gold Bands is basically a pure potboiler, with very little classical Vancian charm. It's still quite entertaining, though, and it does have some nice Vance aliens (or modified humans). The hero is Earth-born thief Paddy Blackthorn, who tries to steal some space drives. The secret of the drives is known only to the five Sons of Langtry, each a much-altered human from a different planet, and space drives are doled out very sparingly, especially to the detested Earthmen. Sentenced to death, Paddy manages to escape and kill the Sons, and to steal the title objects which include, treasure hunt fashion, clues to the location of the space drive plans. Paddy becomes the object of an interstellar manhunt, while, with the help of a beautiful Earth agent who gets to him first, he tracks down the space drive plans based on the clues in the bands. It's good fun, if totally unbelievable, and riddled with plot and world-building holes.

While in prose style this book is uncharacteristic of classic Vance, the cultural setup at least hints at later Vance. More interestingly, in this context, the much-altered human types -- different enough to be aliens -- strongly foreshadow the altered humans in The Dragon Masters.

The Dragon Masters is very good, though I'd rank it below Vance's very best stuff. As I have said, it shares with The Five Gold Bands (otherwise a thoroughly different story) the theme of radical modification of humans. In this case, in the very far future, humans have almost been eradicated. Those that remain are either slaves of aliens, modified for special uses; except on one planet, where a few remain free. The aliens have visited this planet on occasion, but then leave for long times. In the past, the free humans have captured some aliens and radically modified them for their own uses.

The hero, Joaz Banbeck, a very Vancian hero, dour, misogynistic, intelligent but resigned, has determined that the aliens are due to return, and he tries to organize a defense while dealing with a foolish enemy in the next valley, and also with the reclusive humans who live underneath the ground. The book is quite dour, with a rather bitter and uncompromising conclusion. The science is typically silly (though I can think of ways to paper over the worst bits), but the description is good, and the action is sound. The story moves well and fascinates And the prose is enjoyable as ever with Vance, if perhaps not tuned to the highest pitch of Vancean elegance.

Below is what I wrote about the very late Ace Double pairing The Dragon Masters with The Last Castle, much of it originally for SF Site: 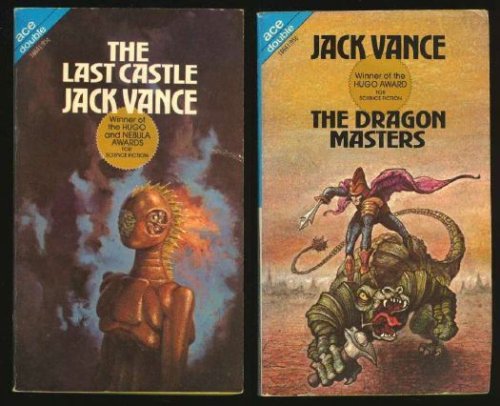 This is to some extent a cheat as an "Ace Double Review". I don't actually have a copy of this Ace Double. But I have just reviewed, at SF Site, the iBooks reissue of these two short novels, called simply The Dragon Masters, based on the Vance Integral Edition texts. It seemed to me that this would be a good opportunity to highlight Ace's practice, in the latter years of Ace Doubles, of repackaging previous Ace Double halves by the same author, originally paired with other books, as new Ace Doubles -- and as such as sort of "omnibus" editions. In addition to this Vance book, Ace did similar repackagings of pairs of stories by Mack Reynolds, Samuel R. Delany, E. C. Tubb, Philip K. Dick, Marion Zimmer Bradley, and others. The combination of The Dragon Masters and The Last Castle may well be the shortest ever Ace Double -- however, it's also one of the very best.)

Jack Vance is one of the greatest SF writers of all time, an SFWA Grand Master, an inimitable prose stylist, as individual a writer as anyone. His career began in the late 40s, and continues to this day, with a new novel, Lurulu, rumoured to be in the publication pipeline. [Lurulu did appear, in 2004, and it proved to be his final novel.]

Both The Dragon Masters and The Last Castle are set in the far future, and both feature humans enslaving genetically modified aliens. In both stories the plot turns on a war between the humans and the aliens. Both stories are quite cynical, and our admiration for the heroes is tempered by our natural antipathy for some of their attitudes and actions.

[The Dragon Masters review is the same as above, so elided here.]

In The Last Castle, a group of decadent humans have returned to a long-abandoned Earth and set up an effete society in several "castles". The labour is performed by various genetically conditioned alien races. For example, the Phanes are beautiful elfin creatures sometimes used as sexual playthings. The Peasants perform menial chores. And the Meks are a hivelike species used to maintain the technological underpinnings. The Meks have finally revolted, and using their control of the technology, they have destroyed all the castles, until only the strongest, Castle Hagedorn, remains. The story turns on the ineffectual attempts of the humans to resist -- most are too concerned with their "honour", unable to sully themselves by any hint of labour, to put up a real resistance. Others refuse to kill aliens for what seems an arguably just rebellion anyway. Only a few see that the only hope for humanity is to regain a semblance of a work ethic and to cast off the decadent ways of the aristocratic society. The prose and characterization here is more effective than in The Dragon Masters, but I thought the plot resolution less convincing.

Bonus picture: the cover of the 1967 Ace Double pairing of The Last Castle with World of the Sleeper, both covers by Jack Gaughan.