A little while ago I posted a list of 100 books I haven't read, implying of course that they ought to be next in line. The list included My Antonia, by Willa Cather, so naturally my last post was about Willa Cather's novel ... Death Comes for the Archbishop. Also on the list was Edith Wharton's short novel Summer. So what was the next fiction I read by Cather's great contemporary? Her collection of short novels, Old New York. (Which does not include Summer!)
Oh well. I don't care much in which order I read these great writers! And I was very happy to read Old New York (and also Wharton's memoir, A Backward Glance, of which more in a post to come.) My impression is that these stories were written partly in response to the reception of The Age of Innocence, a story set in New York in the 1870s, for which Wharton (according to A Backward Glance) had no expecations of commercial success. Instead, the book was a bestseller, and so it must have seemed, to Wharton or to her editors, that more stories about "Old New York" might have a market.

The book appeared from D. W. Appleton (by then her regular publishers) in 1924. Somewhat to my surprise, none of the four stories had a magazine publication. (Wharton published often in the magazines of that time, and was paid very well.) The four novellas are: "False Dawn" (perhaps 19,000 words), "The Old Maid" (perhaps 29,000 words), "The Spark" (about 15,000 words), and "New Year's Day" (perhaps 23,000 words.) The unifying conceit is that they all concern upper class New York society, in four consecutive decades, the '40s, '50s, '60s, and '70s. (You may note that this time period overlaps with the main time period of The Age of Innocence, and indeed a couple of characters from that novel show up in one or two of these stories.) The book was very nicely published as four slim volumes, each with its own dust jacket, and a slipcover for the set. 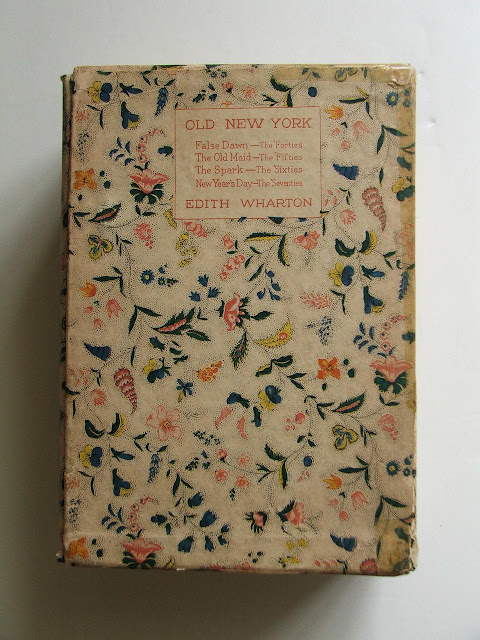 So -- to consider each story. "False Dawn" is about Lewis Raycie, the son of Halston Raycie, one of the leading citizens of 1840s New York. Lewis is about ready to take his "Grand Tour" of Europe. His father -- purely a philistine, and a tyrant too -- is happy to pay for Lewis' trip, but he does ask one thing of his son -- to bring back some paintings by the Grand Masters -- perhaps a Raphael will be beyond their means, but surely someone of the next tier. Halston also has plans (of course) for Lewis' marriage, but Lewis is in love with Treeshy (short for Beatrice) Kent, a girl of good enough breeding but little money and little looks. Curiously, the story doesn't really turn on Lewis' love affair, but on the artworks. Lewis, on his travels, runs into a passionate young Englishman, who preaches to him about art. (This is, of course, John Ruskin.) Lewis becomes a convert, and instead of buying the then fashionable near-Grand Masters that his father wants, he acquires the Italian primitives (as then called) that Ruskin (and others like Dante Gabriel Rossetti) champion. And when he gets home, his father is furious, and disowns him. This is sufficient to clear the way for him to marry Treeshy ... but with no money their lives are rather sad; and Lewis' valiant attempt to promote his paintings by opening a museum fails utterly. The twist ending comes after they have died, and Lewis' more conventional sister, who made a successful marriage, inherits the supposedly worthless paintings ... and some of them are now realized as masterworks, so she makes a killing. I thought this story rather contrived, and to be honest I found the namedropping of the likes of Ruskin and Rossetti a bit tiresome. That said, I thought Lewis in particular a very well realized character -- he's not any sort of artistic critic of genius, he's a weak man who instead of submitting to his father submits to the views of Ruskin and Rossetti. And of course Wharton's prose is exceptional. It's not a great story at all, but worth reading.

"The Old Maid" is, it seems, the story of this set which is most highly regarded, and that might be fair (though I also quite liked "New Year's Day".) It's about two cousins: Delia and Charlotte Lovell. Delia makes a good marriage with James Ralston, scion of a very traditional New York family. Charlotte -- who is, alas, a bit plain, and from a poorer branch of the family -- is a bit different -- she has started an orphanage, to care for some of unfortunate children (including black children), and so she seems doomed to be an old maid. But then she becomes betrothed to Joe Ralston. And Delia is thrilled for her cousin -- until she learns her secret. Charlotte's orphanage is in part designed to allow her to care for her illegitimate daughter, and her presumptive husband (who knows nothing of this) has insisted that she give up the orphanage (especially as it includes black children.) The other twist is that the father of her daughter Clementina is one Clement Spender -- who was the man Delia truly loved, but wouldn't marry because he wasn't quite respectable enough.

The upshot is that Charlotte cannot abandon her daughter, so she breaks off the engagement. And Delia agrees that Charlotte and her daughter should come live with her and her husband -- but of course her daughter's true parentage can never be revealed. And we jump to the future ... and the girl is of marriageable age, and in love with a presentable young man. But can a girl with no family get married? And Charlotte, of course, cannot reveal her involvement -- but the girl has actually long considered Delia her mother -- what if Delia adopts her? But how will Charlotte -- the Old Maid -- take that. It's a truly Whartonian conclusion ... an agonizing personal decision that seems forced on the character but necessary. I thought the depictions of Charlotte and Delia were excellent. (I'm not sure I quited believed in Clementina.)

"The Spark" tells of Hayley Delane, a man of good birth in New York society who married unwisely -- a rackety woman who has continued her bad ways, constantly taking up with younger men and all but flaunting her affairs in her husband's face. He is generally regarded as something of a fool for the way he continues to take this abuse, and indeed for having suddenly decided to marry her. But he seems to truly need her. The story is told from the point of view of a younger man, who at first takes the standard society view of the Delanes, but who then gets to know Hayley better, and indeed also to work with him. Hayley is a Civil War veteran who enlisted despite his father's disapproval, and who could have avoided service easily -- he had to lie about his age to get in. He was seriously wounded in the war. Yet somehow he doesn't seem to insist on attention for his service, like other veterans we are shown, and he won't talk about his experience. (The story seems set in about the '90s.) The narrator notices, behind the scenes, Hayley's occasional acts of nobility -- defending a horse from abuse by his wife's lover, then apologizing so that society will blame him and not the young man; at work, quietly ensuring that his company does not engage in shady schemes; caring for his wife's dishonest father when he is in need; and always protecting his wife when she gets into trouble -- when any other man would have divorced her. All this is very well portrayed ... what struck me as a bit off is the story of the "spark" that inspired Delane to be such a good man. The narrator eventually learns that Delane was cared for by a male nurse while wounded, who talked to him about his philosophy of life in such a way that Delane adopted a similar morality. We gather of course that this is Walt Whitman, and in the ironic conclusion the narrator insists on reading Whitman's poetry to the aging Delane (who is not a bookish man), with the idea of cheering him by showing him what a success his nurse became; and Delane is dumbfounded by the poetry, gently telling the narrator that he wishes "you hadn't told me that he wrote all that rubbish."

Finally, "New Year's Day" is again told by a young man, concerning something he saw when he was still a boy: a fire in a notorious hotel, from which Mrs. Lizzie Hazeldean and her lover are seen to emerge. Mrs. Hazeldean is suspected of betraying her invalid husband, and here's the proof society needs. The point of view shifts to Lizzie Hazeldean, as she rushes home from the fire to see her husband, in order to convince him she was with someone else. And all goes well enough -- it is clear that he is besotted with her; but too ill to give her the Society life she craves. He can only stay home and read his books -- books Lizzie Hazeldean doesn't care about at all. But we gather right away that she does care for her husband -- very deeply. And she knows he'll die soon, and is crushed by this. At his urging, she goes out again that night to a party, only to be cruelly cut by the society women who are aware of her straying. And within a year, her husband is dead. Her lover comes, and wishes to marry her -- but she refuses absolutely: there was only one man for her, her husband.

The narrator takes up the strand later, after he is grown, and he gets drawn into the orbit of Lizzie Hazeldean, who entertains regularly, receiving those who don't care about her reputation, particularly including respectable young men who like a "jolly" woman. He too gets to know Lizzie fairly well, and eventually learns the truth -- she truly loved her husband, and realized that he insisted on pampering her, even as his illness made it impossible to make a living, and as his family money was used up. So her affairs were simply, in essence, a form of prostitution -- her lovers would make her gifts, which she would use to convince her husband that she was as pampered as he wanted. I found all this affecting but hard to quite buy -- this is a case of people in the past with alien values that sometimes are just a bit too hard to understand. Still, I liked it -- and it's only fair to say that much of Wharton's work turns on similarly uncontemporary manners, and in other stories such as "Autre Temps ..." (my favorite of her shorts) and The House of Mirth (and Lizzie Hazeldean is much like Lily Bart in some ways) I was able to empathize somewhat more.

In sum -- these are fine novellas, but not for me at a level with either her best shorter work or her greatest novels. But still enjoyable reading.