Birthday Review: The Engine of Recall (and some other shorts), by Karl Schroeder

I don't think I've posted a Birthday Review at this blog for the excellent Canadian writer Karl Schroeder yet. One day late, here's one finally. This includes a review I did for SF Site of his story collection The Engine of Recall, plus a few additional reviews of short fiction from Locus. 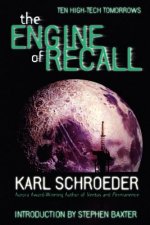 The Engine of Recall, by Karl Schroeder

Canada has been the source of a great deal of intriguing SF over the past decade or so, much of it at least moderately "hard SF." Hugo and Nebula winner Robert J. Sawyer is of course one of the most prominent of Canadian SF writers. Other significant recent examples include Robert Charles Wilson, James Alan Gardner, Alison Sinclair, Julie E. Czerneda, Sean Stewart (more of a fantasy writer, of course), and Cory Doctorow. (Though often, it seems to me, Canadian writers have a sort of distributed nationality -- Wilson was born in the US, Stewart grew up splitting time between the US and Canada and now lives in the US, Doctorow spent several years in the US and now lives in Europe.) One of the most rigorously "hard SF" writers to come out of this "Canadian Renaissance" is Karl Schroeder, author of the impressive novels Ventus and Permanence. Now Schroeder has published his first story collection, The Engine of Recall (edited by Sawyer for his imprint at Red Deer Press).

The first thing that struck me about the Table of Contents was the relative unfamiliarity of most of the stories. This was a source of mild embarrassment to me, as I consider myself generally very up to date on short SF. It turns out that one engine of the "Canadian Renaissance" I mentioned above has been some Canadian outlets for SF, most notably the magazine On Spec and the anthology series Tesseracts, that to some extent slip under the radar of often US- and/or UK-centric SF readers. So Schroeder managed to publish a passel of first-rate stories without generating quite the buzz he deserved -- though one story here, "The Dragon of Pripyat", was reprinted in Gardner Dozois' The Year's Best Science Fiction, Seventeenth Annual Edition, and another, "Halo", was chosen for David Hartwell's anthology The Hard SF Renaissance.

Well, that's one reason for story collections -- to bring to light stuff that might have been missed on first publication. And the stories here are well worthy of this exposure. Take "The Dragon of Pripyat." Gennady Malianov is a morose Russian (or Ukrainian) man hired to investigate a threat to release radioactive material from the remains of Chernobyl. Malianov heads directly to the ghost town of Pripyat. There he meets a curious squatter, and also encounters the mysterious "dragon." He and a remote friend figure out the somewhat mundane (though interesting) nature of the dragon -- the heart of the story, though is the paradoxical landscape of Pripyat. Malianov turns up again in the collection's only original, "Alexander's Road." This time the threat is some missing nuclear warheads in Azerbaijan. Malianov's investigation, however, turns up a couple of further, even scarier, nuclear threats.

One of my favorite stories here is "Halo", set in the same future as Schroeder's novel Permanence. Elise Cantrell is a resident of Dew, a planet of Crucible, a brown dwarf star. Dew has just managed to install an artificial "sun," but this hopeful step is endangered when Elise discovers a message from a hijacked ship, taken over by fanatics who plan to destroy the fragile colony on Dew. She forges a tenuous relationship with one of the original crew of the hijacked ship, but they both know the only ultimate hope for Dew is to destroy the attacking ship, complete with innocent crew members as well as hijackers. This is an excellent example of a moving human story essentially set in an exotic, purely SFnal, environment. Another such story, not quite as successful but still enjoyable, is "The Pools of Air," in which a crew filming in Jupiter's atmosphere are placed in peril by a freak accident to their ship. "The Cold Convergence" is also set in the outer Solar System, this time on Saturn's moon Titan. A psychologist is hired to try to treat a man who has just wandered alone into the Titanian wilderness. The interesting story of the man is undermined a bit by an implausible resolution involving unconvincing real estate laws.

"Making Ghosts" is an interesting story about pioneers in transferring human consciousness to computers, while "The Engine of Recall" involves using such "ghosts" to pilot spaceships in such dangerous environments as the neighborhood of a neutron star.

"Allegiances" tells of a woman in war-torn former Yugoslavia who is cursed by the ability rob other people of the facial recognition sense. An intriguing idea that I don't think the story quite used well. "Hopscotch" is a rather Fortean story, in which the narrator is in love with a woman obsessed with statistical analysis of unusual events such as UFO sightings and raining fish. "Solitaire" tells of a young human criminal who manages to be "adopted" as sort of an interpreter by a solitary, uncommunicative, alien. The ending nicely violates traditional SFnal expectations.

It is clear to readers of Karl Schroeder's novels that he is a fascinating writer of Hard SF. The short stories in The Engine of Recall showcase that imagination effectively -- strong stories that aren't afraid to be adventure stories while also portraying cool ideas.

Strahan’s introduction signals his interest in what might be called older style SF as well. Hence fine stories like Karl Schroeder’s “Hero”, part of his Candesce series, concerning a young man who truly becomes a hero in delivering a critical message to one of the mysterious and dangerous precipice moths;

And from Karl Schroeder and Tobias Buckell we get “Mitigation”: Here a man is recruited by a Russian gangster to steal the gene sequences of rare plants from a Scandinavian repository. The thrillerish plot is OK – what holds the interest is the buzzing of ideas about the future of our embattled environment.

Several other stories are particularly strong. Karl Schroeder’s “Book, Theatre, and Wheel” concerns an attempt by a medieval woman to retain knowledge during the Dark Ages, despite the suspicion of the Church, and the political machinations of her liege lord.

One of the significant anthologies of the year is Chasing Shadows, edited by David Brin and Stephen W. Potts, on the subject of “our coming transparent world”. There is a strong mix of essays on privacy, reprint stories, and a large selection of originals. I thought the best was “Eminence” by Karl Schroeder, about a cryptocurrency (like Bitcoin), called Gwaiicoin, used by some Native American communities in the Canadian Pacific, based in part upon potlatch, and on environmental values, and on “eminence”, or social reputation. Nathan is one of the coders behind it, and he’s staked his economic future on it, much to his wife’s distress. And now it seems it’s been hacked – which pushes Nathan to a personal crisis, and perhaps an understanding that if he’s going to invest in something like Gwaiicoin, his investment needs to be total.

The Million, by Karl Schroeder, is a very intriguing novella set in the future of his novel Lockstep, which I have not read. In this future, Earth is inhabited by close to exactly one million people, who strictly maintain their population, and the ecological integrity of the Earth. Any violation -- an unauthorized Visitor, or an unplanned child -- is subject to severe punishment at the hands of the Auditors. Gavin is an unauthorized child living on the Chaffee estate, having been kept a secret his whole life. But things come crashing down one day with they are attacked, and his existence is discovered. His father is killed, and his brother arrested -- one of the attackers is killed as well, and Gavin, escaping, takes an offered opportunity to take the identity of that man, Neil Makhav; and to apply to join the Auditors. Another new auditor candidate is Elana, who is part of the Hundred, the most privileged among the Million. Both Gavin and Elana are charged with secondary tasks by their "families" -- Elana's Aunt needs a plant in the Auditors to ensure their family's position remains secure through the next Jubilee, in which ten billion Visitors will run roughshod over Earth for a month. And Gavin, besides his own secret quest to free Bernie, is asked by his new "uncle", Eli Makhav, to do some spying for his family. Gavin and Elana become friends of a sort, and their separate snooping leads to a completely unexpected revelation. This is enjoyable indeed, but a bit thin. Schroeder's ideas are (as usual for him) fascinating, but they need more development and examination -- all of which I suspect is to be found in the novel.