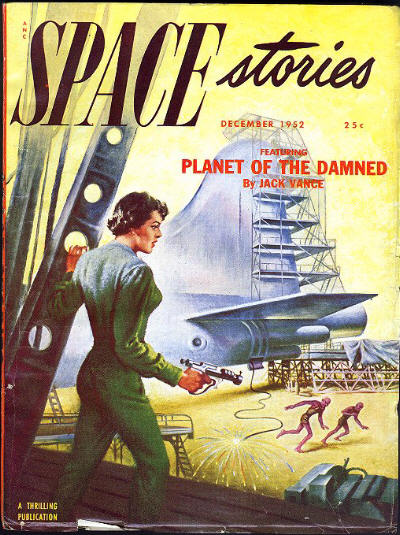 John Holbrook Vance would have turned 104 yesterday (August 28, 2020). (He died back in 2013.) He is one of the most enjoyable SF/Fantasy writers ever, and I noticed that I had never done a story review compilation for him before. So here we go -- a selection of some things I wrote about a number of his stories that I found in old magazines, mostly. Many of these stories are a bit on the obscure side -- not always his best work. But still well worth reading!

(I also realized I have at least one Ace Double review of his books I haven't posted about here -- maybe later!)

"Brain of the Galaxy" is better known as "The New Prime". It is one of the most highly-regarded of early Vance stories. I like it, but I think it tends to be a bit overpraised. It's about a sort of virtual reality contest to select the new "Galactic Prime" -- each candidate is exposed to a variety of harsh tests. The ending is a moral twist.

One of the real unexpected bonuses of this venture was to find an obscure early Jack Vance story, "Temple of Han".  As far as I know, this has not been anthologized before.  It has a hint of Vance's ironic voice, but really isn't close to being in his mature style.  An Earthman on a colony planet steals a jewel from the title temple.  A god-like being from another dimension takes offense and moves the entire planet.  The Earthman is compelled to return the jewel, but instead of accepting the death penalty, he engages the "god" in a battle with the help of the god's rival gods.

And finally Vance's "The Masquerade on Dicantropus", about a couple whose marriage is falling apart due to the frustrations of living on a new planet, along with a mystery about a strange pyramid built by the native Dicantrops, and the potential of a motherlode of diamonds. I thought it pretty inconsequential Vance.

Each issue of this pulp featured a long novella or short novel. The long story in the December 1952 issue was by Jack Vance, "Planet of the Damned", at 47,000 words definitely novel length. This is the novel that led me to find Space Stories. I'm a Jack Vance enthusiast, and I was looking for a copy of his early novel Slaves of the Klau, and this was its original publication. (Vance's actual preferred title was Gold and Iron.)

As the story opens, Earth is occupied, very benignly, by a few members of the Lekthwan race, a very humanoid (to the point of being typically beautiful, if unusually colored) people who have given humans the benefits of some of their advanced tech. But Roy Barch, an employee of one of the Lekthwan administrators, is suspicious -- he believes the Lekthwan influence, even if well-intended, will stunt Earth's development. He is also somewhat hopelessly under the spell of the beautiful daughter of his employer. One night he takes her on a date -- resulting only in frustration as she makes it clear that she regards him as a hopeless primitive -- but on returning to the Lekthwan estate he finds all the residents murdered. He and Komeitk Lelianr, the Lekthwan girl, are rounded up by the attackers, the brutish Klau. It seems the Klau are evil slavers, trying to take over the galaxy, and given only token resistance by the virtuous but ineffective races such as the Lekthwan.

The course of the rest of the story is predictable -- upon arriving at the slave planet, Roy finds a way to escape with "Ellen" (as he calls Komeitk Lelianr), despite her ennui and her conviction that resistance is hopeless. After hooking up with a grubby bunch of escapees, Roy eventually hatches a desperate plan to make a spaceship from scratch and head back to Earth. Vance elaborates this rather routine plot pretty well -- Roy's efforts are far from fully successful according to his plans -- though they do end up having the desired effect; and Komeitk Lelianr doesn't immediately jump into Roy's arms. It's not a great novel at all, but it's enjoyable in the terms of early 50s pulp SF, and it prefigures later Vance pretty well, particularly in the character of Komeitk Lelianr, who is the standard late Vance aloof, superior, woman. The only departure is that at the end she comes back to Roy (admittedly somewhat hesitantly), while in later Vance she might have been more likely to meet a bitter end.

Vortex was a truly awful magazine that lasted only two issues. It might be best known for featuring the first professional sale by Marion Zimmer Bradley. It was doubtless a salvage market for more experienced writers, and I feel that must have been the case with "The Mitr", by Jack Vance. A young woman is sort of the pet/food animal for a race of huge beetles. Then a spaceship comes with what seem to be men inside. An oddly pointless story, I thought. Not even close to good Vance.

Vance's "Shape-Up" is a rare story, only reprinted in his 1986 Underwood-Miller collection The Augmented Agent, which reprinted 8 previously uncollected stories. (Mostly uncollected for good reason, I will say.) It's routine Vance of the period, competent pulp work with a bit of a twist -- not bad of its type but not memorable. A man is hired for a job with a notorious leader of adventurers. After a couple of tests, he finds himself one of five remaining candidates for four positions -- and it transpires that the extra man is a murderer, and that the whole point of this exercise was to flush out the murderer. Unconvincing reasons are given as to why this would work, and pointing to the killer -- but then there is a twist.

Jack Vance's "When the Five Moons Rise" is set on a planet with five moons. Perrin is a lighthouse operator. His veteran partner, Seguilo, warns him not to believe anything he sees when the five moons appear together. Then, after they all rise, Seguilo disappears -- only to strangely reappear then disappear again. Perrin encounters more strange things -- a working radio after his has broken, then a beautiful woman just as he has been, all lonely, dreaming about. He soon gathers that whatever he imagines might come to be -- and then he can't stop thinking "What if I imagine something awful" ... Nicely done light horror, not terribly Vancean but solid work.

I'm a stone Jack Vance fan, and I've read "The Moon Moth" several times with pleasure. But I think it diminishes a bit on repeated rereading. Basically, the hero's achievement begins to seem trivial and lucky. And a bit implausible. That said, the evocation of local color is still lovely. (As most know, the story is set on a world where everyone wears masks, and where the only currency of importance is "strakh" (reputation). The language has a musical component conveyed partly by singing and partly by playing instruments, and the right choice of instrument is vital. A new envoy is charged with intercepting a dangerous assassin who has chosen to hide on this world, and his clumsiness with the language and etiquette gives him much trouble.)

"The Mountains of Magnatz" is a Cugel the Clever story. Quite enjoyable, with the usual Vance touches (a bit of misogynism, delightfully mannered prose, a slightly exotic society) plus typical Cugelisms -- basically, his decided non-cleverness, and his rather vile nature. The story concerns Cugel coming to a village and ending up imprisoned in a tower, as the replacement "Watcher" ... he escapes, of course, and takes the girl he was promised in payment with him (without her permission, of course.)

Years ago I read Jack Vance's "The Dogtown Tourist Agency" when it was first published in the Silverberg/Elwood anthology Epoch. That anthology was roundly criticized (one review said that it was best described by removing the "p" and the "o" from its title), but though it did contain some dreck, it also had some decent stuff (one suspects, perhaps unfairly, most of the latter bought by Silverberg.) The Vance story, really a full-length novel (43000 words), is in the middle range.  Solid but not special entertainment. A year later, Vance published a novella, "Freitzke's Turn", in another Silverberg anthology, Triax. Eventually the two stories were assembled as a book, marketed as a novel, Galactic Effectuator. The title character is Miro Hetzel, an investigator operating in the Gaean Reach in Vance's baroque Galactic future. The longer story ("The Dogtown Tourist Agency") is fairly routine, worth the time but not memorable, about a planet full of a warlike race which is administered by humans and two other alien races in order to keep the warlike indigenes in control, and a possible gun-running plot. The shorter story, "Freitzke's Turn", is really fairly minor Vance as well, but I found it quite charming in a mordant way. Hetzel is called in to investigate a former classmate of his, a surgeon who has been known for dishonesty and brilliance his whole life, and who is taking rather unusual revenge against a rival in love, and perhaps against some other former enemies. The title has little to do with the story, but it is a delight nonetheless.