Old Bestseller: Death Comes for the Archbishop, by Willa Cather

Death Comes for the Archbishop, by Willa Cather 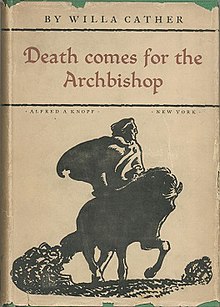 Long ago I formed a completely false view of Willa Cather's fiction, assuming it was dour, dreary, and message bound, so I ignored her. This was at the time that she was also being ignored by critics -- relegated to the status of "minor regionalist". Her work has been not so much rediscovered (My Antonia at least always retained some readers) but re-evaluated, partly by feminist and Lesbian critics, but really more widely than that. I happened across her short novel A Lost Lady a few years ago and was entranced, and soon O Pioneers! and My Antonia and Lucy Gayheart were on my TBR pile. But I never got to them -- deadlines, too many books, too little time, all that. A couple of weeks ago I found a first (no dust-jacket, alas) of he well-regarded novel Death Comes for the Archbishop at an estate sale, and so I bought that, and half by accident ended up reading it.

Willa Cather was born in 1873 in Virginia. Her family moved to Nebraska in 1883. Cather published pieces in the Red Cloud, NE, newspaper early, but planned to become a doctor. But at the University of Nebraska she continued to write, and switched to an English major, graduating in 1894. She moved to Pittsburgh in 1896, and taught school while also working for magazines and newspapers, and publishing occasional stories. She moved to New York to join the editorial staff at McClure's in 1906. (I encountered some editorial correspondence between Cather and a McClure's contributor, H. G. Dwight, when I was writing about Dwight's collection Stamboul Nights.) McClure's serialized her first novel, Alexander's Bridge, in 1912, and her three famous "prairie novels", O Pioneers!, The Song of the Lark, and My Antonia, soon followed. (A Lost Lady is also a  prairie story.) She won a Pulitzer in 1923 for her World War I novel One of Ours. Death Comes for the Archbishop was published in 1927, and it remains among her best regarded novels.

Cather lived in New York from 1906 (summering in New Brunswick eventually), and from 1908 she lived with Edith Lewis. Her only other close relationships were with women, and so it is (plausibly) assumed by many that she was a Lesbian, but she never so identified (publicly.) Of course that last is easy to understand given societal pressures -- but who knows? Somebody suggested recently that she may have been a trans man -- she regularly dressed in masculine clothes, hung out with boys more often as a child, called herself William at times -- again, who knows? I thought that interesting, at any rate.

My copy of Death Comes for the Archbishop, as I noted above, seems to be a first, from Alfred E. Knopf. No dust jacket. It is inscribed on the inside front cover by Mildred P. Duncker, in pencil.

This is an historical novel, and very episodic, telling of the career of Bishop Jean Latour between 1851 and his death in 1889. The first date corresponds to his appointment as Bishop of New Mexico, after that territory became part of the United States. Latour is accompanied by his friend Father Joseph Vaillant. In several chapters, we see the slow process by which Latour -- with Vaillant's very considerable assitance -- asserts his authority over his people, both Indians and (former) Mexicans. At first he must convince the Bishop of Durango of his Papal authority. He deals with an established pastor who is a libertine and a parasite on his parishioners -- but still popular. There are some intriguing stories of Indian beliefs -- all held by sincere professing Catholics. Father Vaillant serves as partly his enforcer, partly his intermediary -- and then is sent to Colorado, eventually to become Bishop of Colorado. Bishop Latour, all along, plans to build a cathedral in Santa Fe, and finally gets it done.

The portait is of a good man, but perhaps not a great man. His standard approach to people who are doing wrong is to wait them out (with perhaps a couple of exceptions) -- to accommodate them with disapproval, and then when they are gone, to assert his authority. He was truly appalled at the expulsion of the Navajos from their ancestral home, but while he protested, he did nothing more, and was fortunate to see them restored only a few years later. Latour is an honest and sincere man, but rather cold sometimes. Vaillant may not be quite so honest -- he is insistent on begging and cajoling and shaming people for contributions to the Church -- but he is more passionate.

In the end, of course, both men must face death. And the scenes of the (now) Archbishop's dying days are moving and beautiful. Both he and Vaillant were successful -- they established strong dioceses in New Mexico and Colorado. Latour built his beautiful cathedral. Both truly led their parishioners to Christ (as they saw it, of course, I don't wish to debate theology and neither did Cather.)

But, really, much of that fell a bit flat for me. What sung? Two things: the landscape, for one. Cather, in everything I've read by her, was a complete master of the description of landscape. New Mexico's desolate spaces -- and the utter beauty visible there -- is completely believable. I've been through New Mexico twice, once in the South and once the North (and a fraught trip that Northern one was, for unexpected reasons) and I think it is a beautiful place, and Cather captures its beauty -- including much I never saw -- wonderfully. Second -- the Indian stories. These are fascinating, beautiful in their own way, and never seen in a deprecating way. They are made real, and true. And, of course, much of this is the result of Cather's prose, which is elegant, not ornate at all, but quite lovely.

Finally, I should add, most of this novel is based on true events. The "real" Father Jean Latour was Jean-Baptiste Lamy, first Archbishop of Sante Fe; and the "real" Father Vaillant was Joseph Projectus Machebeuf, first Bishop of Denver. Most of the events portrayed in the novel are real, though some are invented (or reimagined from something that happened another time) as well. Lamy really did push for the building of the Cathedral Basilica of Saint Francis Assissi in Santa Fe -- which is still there, and quite a lovely building. There are other historical characters presented, some under altered names, but some, including Kit Carson, under their own names.

I didn't love this novel, but I liked it -- and I will be soon continuing to more of Willa Cather's work.