Today is John Varley's birthday. He's 73! I'm not sure people who weren't reading SF in the mid-70s realize what a phenomenom he was. His first sale (or maybe not, as we'll see below!) appeared in the very first issue of F&SF I ever saw (and bought), the August 1974 issue. He was THE GUY we looked for in the magazine from that time throughout the '70s.

I haven't written a whole lot about his short fiction, because it mostly appeared long before I was writing. So I've assembled just a couple of pieces about his stories, and a blog post I wrote about one of his enjoyable later novels. 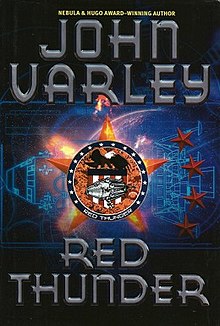 John Varley's latest novel is Red Thunder. Varley is well-known as a writer much influenced by Heinlein, and this book pretty openly advertises its influence. To begin with the basic plot echoes slightly that of Heinlein's first juvenile, Rocket Ship Galileo. In the Heinlein book, a couple of teenagers, with the help of a knowledgeable older man, build a spaceship and travel to the Moon. In Red Thunder, four teenagers, with the help of a knowledgeable older man (an ex-astronaut), built a spaceship and travel to Mars. Also, Varley adds in a couple of very direct RAH references by way of character names: the main character is named Manny Garcia, and another major character is named Jubal. Basically, the book is good fun, propelled (pun intended) by a thoroughly implausible scientific advance but otherwise at least in the range of plausibility, with a heartfelt and not too overt message about responsibility and power at its core.

One night Manny and his best friend Dak, and their girlfriends Kelly and Alicia, having just witnessed the latest Venture Star launch, run over a drunk man on a Florida beach. The Venture Star is a shuttle successor, and this latest launch would be boring and routine except that the passengers are the astronauts on NASA's Mars mission. (The book was obviously finished before February 1, 2003, and thus in mentioning the potential dangers of space travel Challenger is brought up a few times, but never Columbia -- one of the pitfalls of writing SF!) Manny and Dak are space nuts, and their girlfriends tolerate this. Manny and Dak are also trying to work their way through college on the Internet, handicapped by their relative poverty and the debased public school system. It turns out that the man they run over is Travis Broussard, an ex-astronaut who was quietly pushed out of NASA a few years previously. And Travis's ex-wife is one of the Mars astronauts.

They strike up a friendship with Travis (who is uninjured by the mishap, thanks to the sand he was laying in), and soon they meet his strange cousin Jubal. Jubal is mentally damaged by his father's abuse, but he is extremely intelligent in his odd way. And Manny stumbles across an invention of Jubal's, the potential of which Jubal doesn't recognize, but Travis does -- it offers the possibility of a spacedrive that can maintain 1g acceleration for approximately forever. One thing leads to another, and the kids hatch an idea for building a spaceship, powered by Jubal's drive, that can get to Mars fast enough to beat not only the American mission but the Chinese mission that is slightly ahead of the Americans. All becomes more urgent when Jubal figures out that the American spaceship has a flaw, which could lead to a disaster -- and only a spaceship like the one they propose to build could possibly rescue anyone. But there are problems, such as convincing the kids' parents to let them go ...

Well, as I said -- good fun. The characters are engaging and involving, though there is a bit of convenience in the way all the good guys are good in just the right ways. I'd say it was a perfectly appropriate YA book -- though there is a fair amount of sex (premarital and without bad consequences -- I suppose some people would object). The central SFnal McGuffin, Jubal's drive, is totally unbelievable, but why quibble? The other SFnal element, the technical and logistical details of building the rest of the spaceship, are, I suspect, a bit stretched, but Varley tries hard to make that stuff work, and it mostly does.

Reading this issue of Vertex, I find that "Picnic on Nearside", which appeared in the first issue of F&SF I ever bought, only TIED (more or less) for the honor of being Varley's first published story. I had never even heard of "Scoreboard" before. With good reason, it turns out. I don't think the story has ever been reprinted. It is set on Ceres, during a protracted and wasteful war between two companies. It's not terribly interesting, and worse, it turns on a gimmick rather blatantly borrowed (perhaps not intentionally) from Ben Bova and Myron R. Lewis's much more economical story "Men of Good Will". "Picnic on Nearside" isn't a masterpiece, but it's enjoyable, and it's an Eight Worlds story -- as such a good introduction to Varley. "Scoreboard" is a downright weak story, and not set in any of Varley's futures -- as such not a good introduction to Varley. So perhaps it's just as well that it seems to be forgotten.

"The Bellman" (Asimov's, June) is set on a colonized Luna. A serial killer is targeting lonely pregnant women. Anna Louise Bach is one of a number of pregnant policewomen who volunteer to be "bait". Naturally, she's the one who attracts the Bellman's attention. The resulting chase sequence is truly exciting, though other aspects such as the Bellman's motives didn't quite convince me.

Review of Fourth Planet From the Sun

John Varley's "In the Hall of the Martian Kings" brilliantly represents the 70s – what writer could be more a 70s SF writer than Varley? This story stands outside his more familiar series. It's about an expedition marooned on Mars, and the unexpected means they find to survive. Much 70s SF, in retrospect, reads like an attempt to recast 50s tropes for a new audience, and Varley's story certainly fits, with its plucky survivors and optimistic science miracles – with such details as a female expedition leader, and lots of sex, marking it as a product of the 70s.