I admit now -- this has become a project for me, to go through most years of the 1950s and figure out what my choices for potential Hugo nominations for fiction might be. I think the years from 1952 to 1957 are interesting years to study, because for a variety of reasons, the Hugo nominations for those years are either unknown, nonexistent, or inconsistent. This is due to three factors -- the Hugos were just getting started, and so in some years there were no Hugos, or no fiction Hugos. The Hugo rules were wildly inconsistent, especially as to time of eligibility, so the Hugos (and the nomination list, in the one year it is known) might have first appeared in the year of the Worldcon, the year prior (as is now standard) or even before then. That all adds up to some years with no Hugos, and some with multiple. 1959 was the first year in which the rules were codified as to year of elibigility (the calendar year before the Worldcon) and as to beginning with a list of nominees for the voter to choose from. In the end I decided to cover all the years in the 1950s, plus 1949.

Of course I'm interested in stories from all years ... which do I think are the best? Which do I think were missed, and which were maybe ahead of their time? One project that explored this question pretty well through the year 2000 was Jo Walton's An Informal History of the Hugos. This began as a series of posts for Tor.com, and a number of us contributed further suggestions in the comments. For myself, I began rigorously commenting on my choices for the best short fiction (and often also novels) of each year -- beginning with 1958! So this latter day effort is sort of filling in what I missed back then! (I do very much recommend that anyone interested in SF history, and Hugo Awards history, should buy Jo's book!) I note, by the way, that I am not second-guessing the voters from that period -- they voted for the stories they liked best. My choices are a) idiosyncratically mine; and b) reflect both cultural changes in the ensuing decades, and also increased visibility to certain stories (typically from other countries, or from non-SF sources) that likely were simply not noticed by voters in that period.

I should emphasize that I am standing on the shoulders of giants here -- not just Jo Walton, but also Richard A. Lupoff, who published three excellent anthologies called What If?, selecting a single Hugo-winning story from each "Hugo year" (including the "missing years" such as 1954) between 1952 and 1973 (that is, Worldcons from 1953 through 1974) that in his view should have won a Hugo. I read those anthologies with delight, and I agree with almost all of Lupoff's suggestions for alternate Hugos, even if in some cases I'd slightly prefer another choice. His choice from 1955 is "One Ordinary Day, with Peanuts", by Shirley Jackson, a choice I certainly endorse (as noted below), even as I acknowledge that the actual short story winner, "The Star", is one of the really good Hugo winners.

So, here is my selection of potential nominees for the 1956 Hugo Awards, had they been done according to present day rules! There actually was a set of potential nominees presented by the convention committee that year -- it's not clear whether the committee made those suggestions, or whether they were a result of some sort of poll. Even so, the eligibility period was explicitly stated to be from June 1955 through June 1956 ... but the nominees in the end included a story from 1954 (and that an outstanding one, Algis Budrys' "The End of Summer"), and several from 1956 -- the novel winner (Robert A. Heinlein's Double Star); the novelette winner ("Exploration Team", by Murray Leinster, plus novelettes "Legwork", by Eric Frank Russell, "Brightside Crossing", by Alan E. Nourse, "A Gun for Dinosaur", by L. Sprague de Camp, and "The Assistant Self", by F. L. Wallace; and one short story, "The Dragon", by Ray Bradbury. My list will consist only of stories from 1955 (those on the 1956 Hugos nomination list will be indicated with an asterisk.)

I'll note as well that two of the 1955 Hugo winners actually were published in 1955 ("The Darfsteller" and "Allamagoosa") so in that sense short fiction from 1955 (at least the first half) did get a fair shake at the Hugos!

I have to think that if I'd been a Hugo voter in 1956 and I was presented with the nomination list below, 1955 only (that is, no Double Star, an awfully worthy winner except it's from 1956), I'd have voted for The End of Eternity, which has long been my favorite Asimov novel. That said, from a certain historical viewpoint, it's easy to see now that the best (or at least most significant) SF/Fantasy novel from 1956 was The Return of the King. 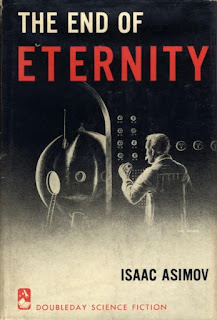 The End of Eternity, by Isaac Asimov*

The Long Tomorrow, by Leigh Brackett*

Tunnel in the Sky, by Robert A. Heinlein

No World of Their Own aka The Long Way Home, by Poul Anderson

A World of Difference, Robert Conquest

Not This August, by C. M. Kornbluth*

Call Him Dead aka Three to Conquer, by Eric Frank Russell*

The Green Queen aka Mistress of Viridis, by Margaret St. Clair

Revolt on Alpha C, by Robert Silverberg (listed only because it was one of the first SF books I read, in the Scholastic edition, borrowed from my library back when I was 10 or so. It's not actually very good, and it's also only novella length.)

The Chrysalids aka Re-Birth, by John Wyndham

Part of me wants to vote for "The [Widget], the [Wadget], and Boff", which is heartbreaking, and for the first half bids fair to be one of the greatest SF stories of all time, but which unfortunately can't quite find its way to a great ending. Instead, I think I'd go with the story that actually won the 1955 Hugo (instead of 1956, that is) ... "The Darfsteller".

"The Snows of Ganymede", by Poul Anderson (Startling, Winter)

"The [Widget], the [Wadget], and Boff", by Theodore Sturgeon (F&SF, November and December)

"The Gift of Gab", by Jack Vance (Astounding, September)

For me, the choice here is pretty easy: "The Earth Quarter", by Damon Knight. It's close to novella length, and was later expanded as an Ace Double called The Sun Saboteurs, which is actually a long novella, and which seems to be the version later reprinted in Knight's collections (under the much better original title.) But I prefer the original version, one of the best of Damon Knight's stories. The Miller and Pohl stories are both very strong, mind you, and indeed this whole list is excellent.

"The Earth Quarter", by Damon Knight (If, January)

"Home There's No Returning", by Henry Kuttner and C. L. Moore (No Boundaries)*

"The Tunnel Under the World", by Frederik Pohl (Galaxy, January)

"Who?" aka "Bulkhead", by Theodore Sturgeon (Galaxy, March)*

"The Cave of Night", by James Gunn (Galaxy, February)

"Stream of Consciousness", by Roy Hutchins (Beyond #10)

I love this six story nomination list, and a big part of me would like to vote for either "Watershed" or "One Ordinary Day, with Peanuts", two really great stories. But it's hard to argue with "The Star", a profoundly affecting Hugo winner.

"Dreaming is a Private Thing", by Isaac Asimov (F&SF, December)

"Watershed", by James Blish (If, May)

"One Ordinary Day, with Peanuts", by Shirley Jackson (F&SF, January)

"The Game of Rat and Dragon", by "Cordwainer Smith" (Paul A. Linebarger) (Galaxy, October)*

"King of the Hill", by James Blish (Infinity, November)*

"A Ticket to Tranai", by Robert Sheckley (Galaxy, October)