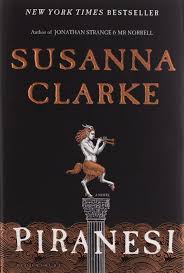 Susanna Clarke's first novel, Jonathan Strange and Mr Norrell, from 2004, was a sensation. It won the Hugo for Best Novel, and eventually became a TV series. It deserved all the accolades it received -- and for me, it is the best fantasy novel of the 21st Century (well, now -- one of the best two!) Naturally, readers wanted more from Clarke -- but aside from an excellent story collection, The Ladies of Grace Adieu, nothing was forthcoming. The reasons are wholly understandable -- Clarke has had considerable health challenges. But, finally, in 2020 her second novel appeared. (And a third is reportedly soon to follow.) This second novel is Piranesi -- and it is as different to her first novel as any novel also describable as fantasy might be. It is also, in its own way, quite as good.

As a side issue, I will note that this was the first book I ever "read" by listening to an audio recording. The book was read by the first rate screen actor Chiwetel Ejiofor. Perhaps I was a bit spoiled by this -- I think he did an exceptional job. I should say, however, that most of the audiobook readers I have encountered since then have been just fine, and none have been bad. (As with almost all the audiobooks I've read, I also got the physical book -- for one thing, it's hard to write about a book without the text to check! (If for no other reason than getting character names right!))

Piranesi bears almost no resemblance to Jonathan Strange and Mr Norrell. It is far shorter, It is set in what seems roughly the present day, not an alternate Regency. It is almost claustrophobic in setting (though strangely manages to not feel claustrophobic despite being mostly set in a single building) and for much of the novel the main character is completely alone. For all that, it is as good as its predecessor.

I read the novel over a year ago, and for a variety of reasons have not yet written about it. So what I write may be a little briefer than usual. I dare say that may be a feature, not a bug!

Piranesi is primarily set in a single House, which is also for all practical matters the World. It is of indefinite size, though there is a visible outside. At the time of this narrative it is occupied by only one person, the narrator, who is called Piranesi by the only other person he knows, whom he calls the Other, and who shows up at irregular intervals. Piranesi knows of 13 other people who have lived in the World -- all skeletons that he has found. The story is mostly told through entries in Piranesi's diary, which records his attempts to catalog things he finds in the House, and to discuss his relationship with the Other.

The Other, who is somewhat older than Piranesi (who believes himself to be in his mid-30s) is in search of the Great and Secret Knowledge he believes can be found in the House. Piranesi is allowed to assist the Other in this pursuit. We soon gather that their relationship is unequal and indeed abusive, though Piranesi does not seem to realize this. And so the plotty center of the story (though truly this is not a novel of plot, even though the plot is important) concerns the unraveling of the secret of why Piranesi is confined in this House, and who Piranesi and the Other really are, and what is their history, and who are the other people who have lived (and died) in the House. A fulcrum is the appearance of another person, a woman, whom Piranesi calls 16.

All this is effectively revealed to us over time, and it's a deeply sad story that I won't detail. Best by far to have it come slowly clear while reading the novel. The conclusion is honest, and moving -- nothing is truly restored but what small justice can be done is done. Piranesi's fate, even after he learns his original identity, is ... appropriate.

But what remains after we learn all this is beauty, and mystery. As the novel's closing sentence reads: "The Beauty of the House is immeasurable, its Kindness infinite." Piranesi's existence is extremely confined throughout the events of the book, but he learns to see in the House its loveliness. And Clarke manages to show us this. The statues of the house -- The Statue of a Woman Carrying a Beehive, The Statue of a Shepherdess, The Body of the Attacking Centaur, etc, and other things like The Biscuit-Box Man, or Piranesi's fishnets, or the birds he finds in some of the chambers, or the varying water levels, or the maps of the stars ... all these seem truly wonderful. Piranesi's own innocence and wonder are contagious (if also in some way sad.) Ultimately the House is truly a fantastical place; and the knowledge the Other is pursuing is quite mysterious, if by no means what the Other expects.

Great novels often bring tears to my eyes independent of tragic events ... it is wonder and beauty that truly make me cry. Piranesi works on me in this way, even as I write this review. Perhaps in an odd way I am reminded of an otherwise wholly different novel, John Crowley's Little, Big. Susanna Clarke's career output is small, but it is remarkable, and she must be counted as one of the great English fantasists.