Robert Holdstock (1948-2009) is nowadays almost entirely known for his series of fantasy stories and novels beginning with the most famous, Mythago Wood (novella in 1981, novel in 1984.) The novella appeared in F&SF about when I graduated from college, at which time I had let my F&SF subscription lapse. Both novella and novel were huge successes (the novel won the World Fantasy Award) and they were followed by several sequels. But somehow I never got around to reading it, and in the process I missed his other novels as well. He was quite prolific, writing under several names such as Robert Faulcon, Robert Black, Chris Carlsen, and, for collaborations with Angus Wells, Richard Kirk. And while he is now best known for fantasy, his early novels were often SF. (The pseudonym Robert Faulcon is amusing, as Faulcon is the surname of the protagonist of the novel I'm considering here.) 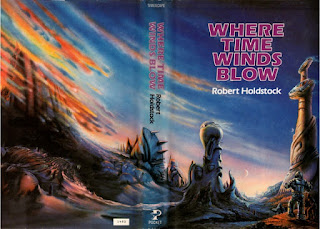 I happened to run across one of those early SF novels, Where Time Winds Blow, at an estate sale, and I snapped it up, motivated in part by the enthusiastic review Joachim Boaz gave it. I read it mostly on the plane to Boston for the Boskone SF convention.

Where Time Winds Blow was published in the UK by Faber and Faber in 1981, and in the US in paperback by Timescape in 1982. I have the SFBC edition, the first (and only) US hardcover, also 1982, with an excellent wraparound cover by Ron Walotsky (erroneously credited as "Ron Walotski" on the cover flap.) 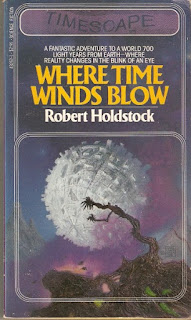 Where Time Winds Blow is an ambitious SF novel, built around some intriguing SFnal ideas which the author is not afraid to reconsider, even upend, in the course of the book. It is set on a world called Kamelios (implying its changing nature) or a more colonialist name, VanderZande's World. The world is fairly inhospitable to humans, who either live in enclosed cities or undergo surgery and genetic modification to become "manchanged". The most unusual aspect, however, is the "time winds", which blow through certain areas as unpredictable times, leaving strange detritus from the past or future.

The story opens with a three person team, led by Lena Talloway, with her other members Leo Faulcon (her on and off lover) and rookie Kris Dojaan. Just as they are planning to head back to their base in Steel City, they encouter a strange time wreck on the shores of an ocean, and the impetuous Kris Dojaan retrieves a strange relic before it disappears again.

On their return to Steel City fissures appear in the team, despite their discovery gifting them a nice bonus. Leo is uneasy about everything, while Kris is impatient to be allowed to explore the dangerous Kriakta Rift in an "r-suit" (a sort of giant robot operated from within by the explorere), and Lena's mood is turning dark. It becomes clear that Kris is obsessed with his brother, Mark, who disappeared in the time winds some time before -- and Kris thinks Mark may be the Time Phantom, who occasionally appears in the Rift. It also becomes clear that there's a mystery behind all this -- behind Mark Dojaan's disappearance, and the potential involvement of either Leo or of their section leader, Gulio Ensavlion, and behind Ensavlion's obsession with the aliens he believes he has seen in some fleeting visions of past or future times, and who he thinks may control the time winds.

All this is intriguing enough, and Holdstock keeps upping the ante. It's curious, indeed, how he begins with a plenty cool idea that could have satisfied an entire novel, and keeps throwing in additional fillips. In this case, one example is the symbiotic alien natives of Kamelios, the huge gulgaroth and tiny olgoi, which seem predator and prey but instead are mutually dependent for reproduction. Also, the many moons of Kamelios, and their effect on the natives. And Leo Faulcon's tortured history with Mark Dojaan, who was by no means the hero his brother considers him. At any rate, the middle of the novel climaxes with a disastrous r-suit trip into the rift, when a time wind sweeps in and takes up Kris and Lena, while Leo survives. Kamelios tradition demands that Leo, having lost the rest of his team, surrender himself to the time winds. But for some time he refuses to do so, in the process facing ostracization. He finally leaves Steel City to spend some time with the "manchanged" and to understand thair somewhat fatalistic but natural attitude towards life on Kamelios.

All this is leading to the conclusion, where, inevitably, Leo must face the time winds again, and the Time Phantom, whom he is convinced is his lost lover Lena. Ensavlion will accompany him -- convinced he will finally encounter the aliens he believes control the time winds. But ... the true revelations awaiting them -- Leo especially -- are not at all what he expects -- nor what the reader expects. I found this conclusion very satisfying -- completely out of left field but once you encounter it logical and honest. And quite moving. 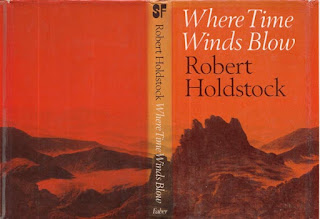 Is this a great novel? Not quite. It's a bit of a slow burn, which needn't be a bad thing, but which I'm not sure always works here. There are some, I thought, unnecessary weirdnesses and implausibilities, such as, to name one thing, Kris Dojaan's quasi-telepathic connection with his brother. And some of the novel depends on us buying Leo's love for Lena Talloway, and this aspect, this relationwhip, is not sufficiently well developed, to my mind.

Still, this is a fine novel, and very original. Definitely worth a look, 40+ years after it appeared. Holdstock, I'd suggest, is an interesting figure in the genre's history, perhaps partly because he died a bit young (or at least so I say, speaking as I am a year or so older than Holdstock was when he died.) He's not at all forgotten -- Mythago Wood at least is still a book to reckon with. But he's not in the forefront of the field's history -- and perhaps he deserves a slightly more prominent place.

One minor point to add -- one panel I did at Boskone involved highlighting undeservedly forgotten novels. I was ready to mention Where Time Winds Blow as a candidate -- but one audience member trumped me by suggsting another early Holdstock SF novel, Eye Among the Blind (1976). I thought the coincidence delightful, and more evidence that Holdstock may deserve more latter-day attention than he seems to get.