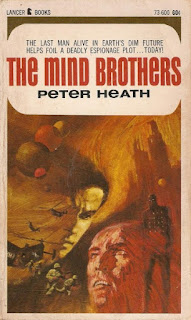 I found this book on the free table at the SF convention Boskone. Since it was free, I figured "Why not?" I had never read of Peter Heath, but the book, though kind of in the spy/technothriller subgenre, also obviously had a science fiction element. I had low expectations, and I suppose you could say those were satisfied.

As is often the case, I find, the author's back story was in some ways more interesting than the book. His real name was Peter Heath Fine. I can only find five books by him. The first three are the "Mind Brothers" trilogy, published by Lancer in 1967 and 1968. The book I have is the first, and it was followed by Assassins of Tomorrow (1967) and Men Who Die Twice (1968). His next book was Night Trains, a mystery published as by Peter Heath Fine, from Lippincott in 1979 -- good enough to be shortlisted for the Edgar Award for Best First Novel. 1981 saw another Peter Heath Fine mystery, Troubled Waters (plus an Ace Books reprint of Night Trains.)

And in 1985, Peter Heath Fine died, aged only 57 (or maybe 59, sources differ), under slightly mysterious circumstances -- he was last seen alive on June 1, but not found until June 29. It's intriguing when a mystery writer's death suggests a mystery -- though for all I know in this cases there's no particular mystery -- maybe he was living alone? Maybe he died out hiking or something? I don't known any more.

The Mind Brothers opens with Jason Starr, recently recruited from the Rand Corporation to develop a secret weapon for the Air Force, which they believe could quickly end the war in Vietnam, taking off from Saigon to test the weapon, which will drive enemy soldiers crazy but not kill them. However, before Starr can activate the machine, the plane carrying it is shot down, and Starr is apparently dead.

But Starr's life is saved by a man from tens of thousands of years in the future -- a man called Adam Cyber, the only human alive in this future, in which humans have abandoned active life, and robots have essentially destroyed the Earth (by accident.) Adam Cyber and the last remaining AI have determined that an intervention in the 20th Century might fix things, and Jason Starr is just the man. However, when the mysteriously cured Starr returns home, he finds his reputation shattered, for the remains of his weapon recovered from the crash appear to prove him a fraud. Starr's only hope is to fall in with Adam Cyber's plan, which involves foiling the Chinese, who have stolen the real prototype of Starr's weapon, and are on the verge of producing an improved version of it.

The rest of the story involves Starr and Cyber travelling to India, where the leading Chinese scientist is attending a conference. There they encounter a beautiful Indian dancer who has reason to hate the ex-Nazi controlling the evil Brotherhood, which is supporting the Chinese scientists efforts ... This all, you see, gets a bit wacky. There follows an exciting trip to a secret installation in Tibet; and much derring-do in stopping the Chinese scientist's efforts, and exposing the ex-Nazi. It all climaxes in a thrilling escape through the Himalayas in a creaky old plane ...  Alas, the beautiful Indian dancer is sacrificed (though not before she and Starr share a blissful night together.) and for that matter Starr's other lover is doomed, too, in the way of these novels.

Anyway, this novel is, as they say, a product of its time. It is as racist and sexist as you might expect. The writing is pretty careless, but actually it's not hopeless -- I think it show signs that Peter Heath Fine had some talent, and if he was aiming at a better market than Lancer, and if he took a bit more time, the prose could have been pretty decent. The plot is a mess, but the action scenes are not too bad. Perhaps the most disappointing aspect -- at least for me -- is that the SF element (lame as it may have been) was essentially dropped, and Adam Cyber becomes nothing more than a sort of super-powered sidekick for Jason Starr.

I have no interest in reading the other two novels. One apparently involves foiling the assassination of Kennedy. I don't know if they further address changing history so that the humans won't cede responsibility to robots in the far future ...