Old Bestseller Review: The Harp-Weaver and Other Poems, by Edna St. Vincent Millay

The Harp-Weaver and Other Poems, by Edna St. Vincent Millay 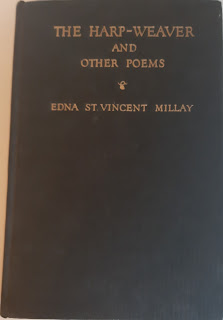 When I was first reading poetry, Edna St. Vincent Millay had a reputation as a fusty old traditionalist, a minor poet, out of step with the times. Essentially two lines of all her poetry seemed to be remembered: "My candle burns at both ends" and "Euclid alone has looked on beauty bare". I will be honest and admit I read nothing of her work beyond those two poems.

The thing is, that while Millay was indeed a traditionalist in the formal sense, and in that sense out of step with the direction of 20th Century poetry at that time, she was in no other sense "fusty". Least of all, I suppose, in her personal life -- she carried on passionate affairs with both men and women throughout her life. She married an older man, Eugen Boissevain, in 1923, and they remained married (in a notably open marriage) until his death in 1946. Millay died in 1950, at age 58, of a fall, though her health had been poor for years. (Her candle really did burn at both ends!) Throughout her life she was a passionate feminist, anti-war activist, and socialist.

Her literary career took flight in 1912 when her long poem "Renascence" was entered in a context sponsored by The Lyric Year. She did not win, but the actual winner (Orrick Johns) avowed that she had deserved to win -- at any rate, this cemented the reputation of "Renascence" as a major poem. (Millay had publshed some well-received juvenilia before this.) Millay attended Vassar, then moved to New York City, and began publishing additional poetry, plays, and also short fiction (which she apparently did not respect, and published as by "Nancy Boyd"). She won the Pulitzer Prize for poetry in 1923, for "The Ballad of the Harp-Weaver', which is included in this collection. (The citation is ambiguous -- perhaps it is for the entire collection, and mention is also made of her earlier collection Figs from Thistles.) Millay became a celebrity, for her poetry and for her live readings of the poems.

I found a used copy of The Harp-Weaver and Other Poems at an estate sale recently, the First Edition from 1923, in excellent condition (but no dust jacket.) (I'm not sure if it's a True First, that is, if it's from the first printing of the first edition -- there is a code on the copyright page: L-X. Not sure what that means.) It is signed by the first owner (I assume) -- alas, I can't read the name. "Minette Douglas, 1923" perhaps?

This is an excellent collection of poems, deserving its Pulitzer, I'd think. Millay's reputation has been restored in recent decades from the low ebb I detected 40 or 50 years ago, and she definitely deserves to be read widely. Millay, as noted, writes in traditional forms (most famously, the sonnet), complete with rhyming and with regular meter. She is very skilled in wielding these forms. Her themes are her own, and thoroughly of her time, not old fashioned at all.

The book is divided into 5 sections. The first is short lyric poems, all in rhyme, linked (I suppose) by themes of nature's beauty -- which for Millay is found as much (or more!) in non-traditional, perhaps conventionally ugly, places than in traditionally beautiful settings. (As she writes in the opening poem, "My heart, being hungry, feeds on food/the fat of heart despise./Beauty where beauty never stood,/and sweet where no sweet lies." The second is also mostly short lyric poems, rhymed, but more about characters. It closes with the longish title poem, "The Ballad of the Harp-Weaver," which is a sort of dark fairy tale about a poor widow who cannot afford clothes for her boy, and her magic harp. I was amused by one poem, "The Return from Town", in which the first person narrator tells of passing a couple of attractive men on her way home, but close "Then in I turned at my own gate.--/and nothing to be sad for--/to such a man as any wife/would pass a pretty lad for." -- a nice sentiment and well turned but rather in contrast with Millay's own love life.

The third part also contains short poems, but these are unrhymed, indeed mostly free verse, and generally of a philosophical nature. Finally, the fourth and fifth sections are all sonnets -- part four is a collection of unrelated sonnets, and part five is given over to an impressive sonnet sequence: "Sonnets from an Ungrafted Tree". I said part four is unrelated sonnets, but a number of them are love sonnets, at least some of them to women (or one woman?). There are also meditations on death, and one sonnet about an urn, and the section closes with the famous "Euclid alone has looked on beauty bare."

As for "Sonnets from an Ungrafted Tree", it is a striking work. It opens "So she came back into his house again/and watched beside his bed until he died,/loving him not at all." It is, thus, telling, in 17 sonnets, the story of an estranged wife who, out of duty, returns to her husband to care for him on his deathbed. There really arises a sense of the woman's character, a sense of their life together and why she left (more lack of love, I gather, than abuse or anything of that sort,) as well as a fine depiction of the house and what she did in caring for him.