At last I return to the roots of this blog -- "Old Bestsellers", my term here for popular fiction of (mostly) the first half of the Twentieth Century. I use the term bestseller loosely -- many of the books I review were indeed huge bestsellers (even if many are all but forgotten today,) but others were more in the category of good sellers, and a few probably didn't sell well at all. The goal is to review popular fiction -- but I won't shy away from serious literature (and I'll note that that distinction can be pernicious -- much fiction that was very popular was very "serious" as well.) (For the record, I will continue posting about other interests of mine: Science Fiction, short fiction, Ace Doubles, etc.)

George A. Birmingham was an author I had never heard of until I stumbled across this book, Bindon Parva, in an antique store. For a couple dollars I figured it was worth a try. I learned that "George A. Birmingham" was the pseudonym used for his writing by James Owen Hannay (1865-1950), an Irish clergyman (born in Belfast) of Scottish descent. Hannay was a leading light of the Gaelic League, a generally Irish Nationalist organization that also advocated for the use of Irish Gaelic (instead of, or in a addition to, English) as a way of emphasizing Ireland's differences from England. As Hannay was a Protestant, and not of Irish descent, and his parents were staunch Unionists, he tended to be distrusted by both sides. Later in his life (after Irish independence was achieved) he did in fact move to England, taking a position at a church near London.

As a relatively poor curate in an Irish church Hannay needed money, and he began to write, at first some short fiction, then some theological works. As far as I can tell he used the name "George A. Birmingham" from the start -- perhaps he felt it best to dissociate his writing from his pulpit, even though his fiction and nonfiction seemed to generally be on religious themes. His first novel, The Seething Pot, appeared in 1905. His early novels seem to be on the subject of Irish Nationalism, and seemed to enrage both sides of the conflict, as they supporte the Nationalist cause but also portrayed some Nationalists in a negative light (not to mention having Protestant protagonists.) His later works seem less political (presumably in part because Ireland became independent.) He wrote some 60 novels and story collections, and another couple of dozen nonfiction works: travel books, theological books (including a book called Do You Know Your Bible?) and many others. 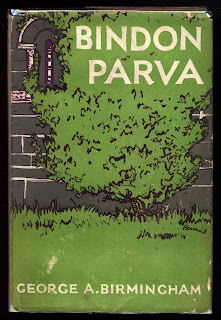 The book at hand, Bindon Parva, was published in England in 1925 by, of all houses, Mills and Boon, though it is not at all a romance novel. I have the US edition (probably the first), from Bobbs-Merrill. There is a preface for American readers in which "Birmingham" says that to his surprise the book was well received in England. In general, it seems to me that "Birmingham" was a fairly successful writer -- publishing over 80 books is proof enough of that, and he does seem to have been financially successful as well (buying a boat, for example.) I don't think he ever published an out-and-out bestseller, but I think this books were generally "well received". And for all that, he seems to me all but completely forgotten now.

Bindon Parva is a curious construct. It is at heart a collection of short stories, about four or five thousand words apiece, for a total of some 60,000 words. But the stories are framed -- doubly framed, really -- as, first, a set of stories told by Sylvester Maturin, the pastor of the Anglican church at Bindon Parva (a fictional town, on the southern coast of England, near Portland), to the narrator, an architect who has been engaged to restore some murals uncovered at that church. The second "frame" is that Maturin tells the stories of several (11, actually) of his predecessors at the church, from the 15th Century through the 19th Century -- and it seems that Maturin has these stories directly from the ghosts of those people. (This makes these technically ghost stories but really, the "ghost" aspect, though given some play, is really more of a framing device than a true supernatural element.)

Birmingham was a real writer, of solid if not spectacular prose, with a way of promoting his ideas, and a good grasp of character. Maturin -- an honest and convinced if somewhat shabby cleric, comes to life, as does the narrator, an intelligent man but (as portrayed) a somewhat empty cynic. The uncovered murals are of the Seven Deadly Sins and the corresponding Virtues. But the heart of the books is the stories of the various clerics -- which also in a way present a brief history of England from the time of Edward IV to Queen Victoria.

The first pastor is Hugh Freyne, who betrays his (then Catholic) vows to get a girl pregnant, and so abandons his priestly vows to marry the girl, and thus establish the (Anglicized) De Fresney family, becoming eventually baronets and essentially the Lords of the small fishing town of Bindon Parva. The succeeding tales recount crises in the parish of Bindon Parva, encompassing its (somewhat forced) conversion to Anglicanism, and subsequent eras of varying religiosity, a conflict of sorts with dissenters (Methodists) and the eventual revivification of the Anglican tradition, and the High Church. So there are a couple of episodes during the English Civil War, the Restoration, the Titus Oates anti-Catholic hysteria, et cetera. Other episodes deal more directly with crises of faith for individual pastors, involving their own sins, or their vainglorious attempts at hymn-writing, or their involvement in smuggling, or their dealing with a parishioner whose daughter has become a prostitute, etc. The resolutions are more or less what you might expect from a clergyman -- but really none the worse for that, emphasizing compassion and honesty and a true belief in God.

The book is quite readable throughout. It seems to me one of those once popular books that seem to have deserved the popularity they may have earned in their time, but at the same time not necessarily to require a revival. Even so, I enjoyed reading it, and though it will likely never have a wide readership, it's a nice book, and not by any means to be disparaged.