Here are the answers to my quiz on SF and Fantasy by BIPOC creators ...

Here's the original quiz -- check it out if you don't want to see the answers first! I'll add covers from books by a couple of the more obscure authors featured here. 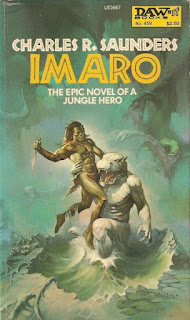 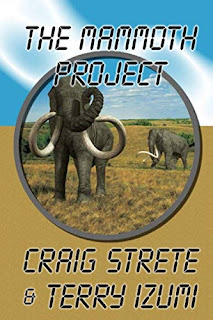 1. Ava DuVernay, the acclaimed director of Selma, became the first Black woman to direct a live action feature with over a $100,000,000 budget with which 2018 film, an adaptation of a beloved Newbery Award winner?

Answer: A Wrinkle in Time

2. Jeannette Ng, a British writer born in Hong Kong, won the John W. Campbell Award for Best New Writer in 2019. She used her acceptance speech to call out the "fascism" of Campbell, and also to support protesters in favor of democracy in Hong Kong. A year later they won a Hugo Award for Best Related Work for that speech, which had led to a new name for the Best New Writer award. What is that new name?

3. The Artistic Director of Opera Siam is a native of Thailand who was raised in England and holds dual Thai and American citizenship. He has written multiple operas and symphonies, and is also a major writer of SF, Fantasy, and Horror in English, including the early stories that became his novel Mallworld, as well as the World Fantasy Award winning novella "The Bird Catcher," and the novel Vampire Junction. Who is this man? (Either his given name or surname will be accepted as answers, as he has published under pen names using both as "last name".)

4. Set in the fantasy continent of Nyumbani, which is overtly based on Africa, the Imaro sequence is pioneering Sword and Sorcery (or "Sword and Soul") stories, created by what Pennsylvania-born Canadian writer, whose death in Nova Scotia in 2020 went unnoticed by the SF/F field for months?

(This one played quite hard -- I hope to write a review of Imaro in the near future, to do my tiny bit to spread the word (if belatedly) about him.)

5. SF and Fantasy have been much enriched over time by contributions from writers with reputations established in the broader literary field -- one might mention the Nobel Prize winner Doris Lessing; or the Booker Prize winner Kingsley Amis. More recently, Jamaican writer Marlon James, who won the Booker Prize for his novel A History of Seven Killings, published which colorfully titled fantasy novel, first of a planned trilogy based on African history and mythology?

6. Contemporary Native American writers of speculative fiction include such luminaries as Stephen Graham Jones and Rebecca Roanhorse. One of the pioneers among Native American SF writers received Nebula nominations for his stories "Time Deer" and "The Bleeding Man" back in 1976, and also edited a magazine of Native American SF: Red Planet Earth. He has remained active, with novels such as Death in the Spirit House (1989) and The Mammoth Project (2019) (with Terry Izumi). Who is this writer?

(This one played incredibly hard on the trivia site -- only two players got it out of over 350. It was a misjudgement on my part -- I remember Strete very well from his appearances in Galaxy way back in the '70s, but I guess the number of people in the general audience -- or even the SF audience of 2022! -- who read Galaxy in the 1970s isn't that high!)

7. Black writers made significant contributions to the SF canon even before the first genre magazines appeared in the mid-'20s. One great example from 1920 is "The Comet," about a Black man and a white woman who meet as perhaps the only survivors of a deadly encounter with a comet. Which prominent sociologist, the first African-American to receive a doctorate from Harvard, wrote this story?

8. The author of Mexican Gothic, the 2021 winner of the Locus Award for Best Horror Novel, was born in Mexico and now lives in Canada. In addition to several outstanding novels spanning genres such as horror, noir, and science fiction, she has made major contributions as the co-editor of magazines such as Innsmouth and The Dark, and of anthologies such as Dead North: Canadian Zombie Fiction. Name this writer/editor.

9. The first novel originally published in a language other than English to win a Hugo Award as Best Novel was translated into English by an American writer who shares his surname with the author of the original version. (The American writer has also had great success with his own writing, including a huge "Silkpunk" series The Dandelion Dynasty; plus winning multiple Hugos for his short fiction.) Please give the name of either writer, both surname and given name please. [Extra credit for giving both names!]

10. The Hugo Award for Best Dramatic Presentation usually goes to TV episodes or movies, so it was surprising to see an experimental rap group nominated in the Dramatic Presentation (Short Form) category two years running for an album (Splendor and Misery) and a song ("The Deep"), both SF-themed. ("The Deep" garnered them a third Hugo nomination when Rivers Solomon turned it into a collaborative novella.) (One group member, Daveed Diggs, is probably better known for his work on a certain historical musical than for his SF-related work!) Name this group.

11. The Canadian poet and short fiction writer Amal El-Mohtar has won a Nebula and a Hugo award. She is also a reviewer of SF on NPR, and also is Science Fiction and Fantasy columnist for what very important review outlet? (Her columnist role was previously held for many years by Gerald Jonas and later by N. K. Jemisin.)

12. A key text highlighting the tremendous contributions of African-descended writers to speculative fiction throughout the 20th Century is Dark Matter: A Century of Science Fiction from the African Diaspora,which won the World Fantasy Award in 2001. The editor won another World Fantasy Award for Dark Matter: Reading the Bones in 2005, and was nominated for the James Tiptree Jr. Award (now the Otherwise Award) for a collection of her own fiction in 2016. She is now the editor of The Magazine of Fantasy and Science Fiction. Who is she?

13. Fandom in its early days was almost exclusively white (with the notable exception of Warren Fitzgerald, founder and president of what is often called the very first SF fan club, the Scienceers) -- so much so that in the late 1950s a group of Bay Area fans invented a Big Name Fan who wrote faanfiction such as The Cacher in the Rye and My Fair Femmefan and who happened to be Black. While this man was a hoax, his name was adopted for a Society founded in 1999 to address "the representation of people of color in the fantastical genres." This Society sponsors two awards, one for SF by POC writers and one for SF about racial and ethnic issues, the Parallax Award and the Kindred Award. What was the name of this hoax fan?

(I chose not to use this question in the main quiz -- nor the next one -- because they don't as directly highly BIPOC creators ... but I do love this particular bit of trivia.)

14. One way in which SF writers can address the racist history of some admired predecessors is to directly reconsider their work, as Victor La Valle does in "The Ballad of Black Tom", his 2016 Shirley Jackson Award-winning story that retells the events of "The Horror at Red Hook", a story by which notorious writer of the '20s and '30s, who is also namechecked in the title of a HBO series that debuted in 2020?

15. One of the most versatile contemporary SF writers is the Nigerian-American Nnedi Okorafor, who has won awards ranging from the Wole Soyinka Prize to the Kurt Laßwitz Prize to the Eisner Award (not to mention the odd Nebula and Hugo!) for her work in young adult fiction, adult science fiction, and comics. She is also writing for films and TV, including co-writing the screenplay for a forthcoming Viola Davis-produced Amazon Prime adaptation of Wild Seed, a novel by which true giant of science fiction?

16. Shortly after the great Samuel R. Delany opened the tap for Black writers in SF, partly by publishing some of his early novels as Ace Doubles, a much less successful Black writer began publishing with a couple of Ace Doubles -- Crown of Infinity and The Age of Ruin. Alas, after two more novels this writer left the field somewhat bitterly, partly because of publishers' habits of whitewashing his characters on his books' covers. Who was this writer? 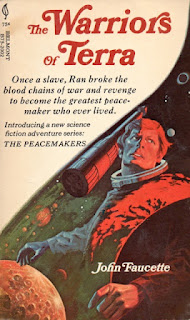 (This question was even harder than the Craig Strete question, I think! (Even with my oh so clever hint via pun in the first sentence!) So I didn't use it in the quiz, but I think Faucette deserves at least some notice, though if truth be told I don't love his novels. Here's the cover to one of his books, showing the blatant whitewashing of his heroes (something that may have contributed to his leaving the field.)

17. This writer was born in the US, to French and Vietnamese parents. She grew up in Paris, speaking French, but writes in English. Her published fiction includes series set in Paris, in Aztec-based worlds, and in futures with living spaceships and a polity based on Vietnamese culture. Her stories "Immersion", "The Waiting Stars", and "The Tea Master and the Detective" have won Nebula Awards. Who is she?

18. Native American writer William Sanders made a mark with his novels Journey to Fusang and The Wild Blue and the Grey, and with short stories like "Elvis Bearpaw's Luck", "Jennifer, just Before Midnight", and most of all "The Undiscovered", which imagines an alternate life in North America for which famous playwright? (The story could arguably be a sequel to a certain late-90s Best Picture Oscar winner.)

(This was a last minute question, too late for the quiz: an attempt at a question about an Native American writer that would be a bit easier than the Craig Strete question. Maybe too easy -- how many playwrights would come to mind, especially who might have been featured in a Best Picture winner?)