I wrote this review when the book came out in 2003. Today is Martin Amis' 70th birthday, so I'm posting it in his honor. It's not the best regarded of his novels (it might be close to the bottom), but I liked it OK, though it's certainly not my favorite Martin Amis work.

Martin Amis is the writing son of the late Sir Kingsley Amis, author of Lucky Jim and The Old Devils and New Maps of Hell and many other books, and one of my favorite writers. I've read quite a lot of Martin's work as well, generally though not always with enjoyment. His best known mode is quite savagely satirical, usually taking on the vulgar excesses of contemporary life, with especial interest in violence and in pornography. This is the mode of his most famous novels, such as Money, The Information, and London Fields, at any rate. Yellow Dog is his new novel, and it is very much in that same mode. Also, as with much of Martin Amis' work, it can be placed, somewhat uncertainly, in the SF genre: at any rate, it is set in an alternate present-day England, with an importantly different royal house, the last three generations of which feature such controversially named kings as John II, Richard IV, and now Henry IX. Also, a minor plot point is that a comet is heading towards Earth, predicted to miss by only a few thousand miles. 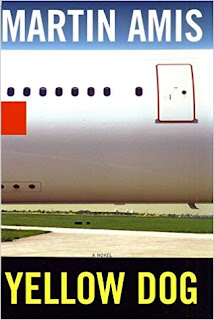 (There is also a strange thread involving an airplane flying from England to the US carrying the coffin of a recently deceased, very rich, man, and also involving the threat of a crash -- I concede I never really figured out what Amis was after with this thread.)

The novel is very entertaining, full of rather savage and often vulgar wordplay, some gaspingly horrid behaviour (especially on the part of the tabloid folks), and some pretty scary things too, especially the degradation of Xan's character. The plot is somewhat intricate, and resolved cleverly and funnily. There are some details about the porn industry that I'm not sure are actually true, but have a horrible ring of possible truth to them. Except for the airplane thread, which as I said I simply didn't get, I thought it worked very well -- a strong, savage novel, not a great work, nor Amis's best, but, I though, pretty darn good.