The great Greg Egan had a recent birthday which I missed due to a trip I took. But it's not too late to catch up, with a selection of my Locus reviews of his short fiction. Alas, I wasn't writing these in the '90s, when he fully erupted on the SF scene -- some of my favorite SF short stories ever are among his '90s work, including above all "Wang's Carpets", truly on the the best SF novelettes ever. This selection also doesn't include my look at his latest Analog story, "The Slipway", from the July-August issue, which is very fine work.

The February Interzone leads with Greg Egan's novella "Singleton". This story brings to mind predecessors like "All the Myriad Ways" by Larry Niven, and "Divided by Infinity" by Robert Charles Wilson, as its protagonist deals with the idea that the Many Worlds Interpretation of quantum physics is true. That is, any decision we make we made all possible ways, in different universes. For Niven's protagonist, the resulting question was "Why do anything?" For Egan's hero, Ben, the problem is a feeling of guilt: he is living a fairly happy life, presumably the result of having made some fairly good decisions. How does he deserve this, while his counterparts in alternate universes are condemned to whatever misery resulted from "wrong" decisions?

Greg Egan’s “Riding the Crocodile” (One Million A. D.) is intriguing enough, but somehow doesn’t quite have the spark of his best work. It’s about a posthuman couple trying to cap a very long life by contacting the mysterious civilization called the Aloof in the Galaxy’s core.

Greg Egan seems to be fully back in the field after years helping people entangled in Australia’s refugee mess: last year we saw a fine novella, and this year there has been a new story in Dozois and Strahan’s The New Space Opera and now “Dark Integers” in the October-November Asimov’s. This is a sequel to his earlier story “Luminous”, in which a small group of mathematical researchers discovered that the mathematical rules of our universe aren’t constant – and that finding other “true” rules implies finding a parallel universe. Worse, the two universes don’t interact well – the imposition of “our” mathematical truth is destructive to them and vice versa. As this story opens, the three people in on this secret have been maintaining a sort of DMZ between the two universes with the help of someone in the other universe for over a decade. But now there are hints that someone else may have stumbled on this mathematical curiosity – which could be very dangerous to the other universe. And likewise very dangerous to us, if they choose to retaliate. The story concerns attempts to explain some new notions about the maths behind this idea – interesting notions but not that easy to follow. But the state of hopeless war implied between two incompatible universes is depressing as described. And while I can’t really believe in the basic idea, it is delightfully loopy and original – simply different enough that we know we’re reading Egan. The story works for its weird SFnal interest – and it also works in sadly depicting two sides who can’t trust each other.

“Induction”, by Greg Egan (Foundation #100), about the eventual results of an unmanned probe to another star system. The story primarily follows a woman who works on the original launch, and who gets a surprising offer when the probe responds from the new system. The message is a fairly central SFnal message – certainly one expressed by many other stories – but Egan’s presentation is up to the current date and plausible.

Interzone in April features a new Greg Egan story, sort of a modern day “Microcosmic God”. In “Crystal Nights” a brilliant rich man, Daniel Cliff, sponsors an attempt to breed intelligent beings insides a computer. The goal is simply AI, but the forced evolution he plans to use raises the question: What do we owe artificial beings we “create”, even if they are a simulation? If we create them in conditions which require their death, are we murderers? Cliff is forced to confront that idea, but his attempts to evade it have concomitant problems. The story sharply examines the basic moral issues, cleverly suggests eventual unexpected consequences, and also speculates buzzingly on computer and biological (and combined) means of evolving intelligence.

This month we get two truly exceptional novellas – either one would be a wholly worthy Hugo winner. From the December Asimov's we get Greg Egan's “The Four Thousand, the Eight Hundred”, tense political SF set in the Asteroid Belt. The politics are appropriately and believable futuristic (though as one might expect you can draw analogies to present day (and decades or centuries past!) political battles – and I suspect different people will draw different parallels, for me an indication that the story is more about real human action than in grinding any contemporary ax). We open with a woman from Vesta setting out on a trip to Ceres, hidden in a piece of rock, part of the economic link between the two asteroids: Vesta getting ice in exchange for rock. We learn the back story: a portion of the Vestan community has been ostracized by a new political movement for the supposed economic sins of their ancestors. (There is an intriguing economic and philosophical debate encapsulated there, that I'll leave for the reader to unpack, but it's Sfnally zingy all by itself.) Many of the persecuted Vestans are escaping to Ceres in the “river of rock”. Most of the rest of the story unfolds in parallel on Vesta, as Anna, the woman in charge of handling the new arrivals to Ceres, deals with them and in particular with a terrible decision she is forced to make; and in the past on Vesta, as we learn about the political changes there, and in particular the acts of a resistance group. Egan sets up an almost impossible political dilemma – with true villains but with no easy answers on how to deal with them; and with good (but not perfect) people faced with no-win situations.

A new Greg Egan piece is always worth your time. In Tor.com for August he offers “Uncanny Valley”. This is the story of Adam, who we soon gather is a recreated version of a famous writer, based on memory uploads and the like. Adam faces opposition from his original’s family, and from the law, which doesn’t recognize his personhood, but the emotional center of the story concerns his realization that he isn’t his original – and why; as well as his encounter with his original’s husband’s family in El Salvador.

Greg Egan is back again in the November-December Asimov’s, with “The Discrete Charm of the Turing Machine”. This follows a man who loses his job to an AI – and who begins to suspect the AI’s were programmed using his skills. His wife is a nurse, and supports them while he looks hopelessly for a job, and encounters others in the same boat, including a conspiracy nut who claims to have evidence that the AIs have taken over everything. That’s crazy, of course, but his wife loses her job as well, and teachers … the story quietly works its way to a subtle conclusion that resonates with today’s economy, and also reflects on what makes human lives worthwhile.

As usual there is a certain focus on Halloween-themed stories in the September-October Asimov’s, and the cover novella comes from a writer one hardly expects to be working in that mode. But, indeed, Greg Egan’s “3-Adica” does open in a foggy Victorian London of sorts, and Sagreda and her lover Mathis do encounter dangerous vampires. But it’s quickly clear we’re in an Eganesque milieu – a simulated world, based in this case on a fairly lame fantasy novel. But Sagreda and Mathis are searching for a different world entirely – it seems they’ve learned the trick secret of hacking the operating systems of their host machines to jump to different simulations, and they are looking for a world based on the (real) math game 3-adica. Their reasons lie in their real nature, which we learn along the way, and 3-adica, when they get there, is a mathematically fascinating environment. (I was reminded a bit of “Wang’s Carpets” as described in that much earlier Egan story, one of his very best.) The story itself comes to a solid conclusion, with a slingshot – and I gather there is more coming in this milieu. Strong work.

Asimov’s for March-April has a novella from Greg Egan, “Instantiation”, sequel to last year’s “3-adica”. The intelligent “non-playing characters” from the previous story, led by Sagreda, realize that the gaming platform on which they’ve carved out space is in trouble, and may become obsolete. They need to look for a way out to a different platform, which involves some intriguing stuff, such as impersonating Kurt Godel … even more intriguing, I think, is the new platform for which Sagreda is aiming. 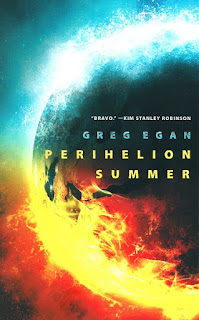 Greg Egan’s new long novella (or short novel) is Perihelion Summer. A black hole has been detected entering the Solar System. Depending on how close it comes to Earth, the effects can range from nothing much to massive floods to total destruction. Or what eventuates: a slight perturbation of Earth’s orbit, so that winters are significantly colder and summers hotter. Matt is involved in a small group experimenting with a self-sufficient floating “fish farm”, and his group decides to take their “floating island”, the Mandjet, to sea as the black hole comes, figuring that if the worst (or almost worst) happen that will be the safest place. Over three sections, we follow his efforts, and the reaction of the rest of the world to the disaster, and the ways in which the Mandjet and the people who end up there try to cope – mostly technologically but also socially – with an unexpectedly fraught future. This is neat stuff, with some intriguing sort of small-scale tech, a good bit of Kim Stanley Robinson-style technocratic problem solving (with a bit less optimism than Robinson usually manages), and it’s fascinating reading as well – the sort of book where welding becomes a suspenseful event.