I've written about Brian W. Aldiss each of the past two years at this time -- he died two years ago, and I posted an Ace Double review in his memory, and last year on his birthday I posted another Ace Double review. So this year here's a highly random look at a few of his very many short stories, not at all, really, his best work. But it's what I have! And Aldiss was always worth a look.

In "Panel Game" (4200 words) Aldiss presents an overpopulated future in which people are expected to watch "telly" constantly, particularly the channels aimed at their social stratum. The viewpoint couple are surprised to be visited by a dashing man who claims to be a rebel against the government, and they offer him some help (reluctantly, in the case of the husband, eagerly, in the case of the wife). No prizes for guessing what he really is ... A cynical story, reasonably effective if quite predictable.

Capsule look at Who Can Replace a Man? 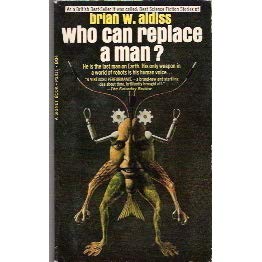 The other Aldiss book I read was a short story collection, Who Can Replace a Man?.  This is a 1965 collection of Aldiss' best short SF to that date. Some of the stories are very good, perhaps most of all "Old Hundredth", though I also liked "Man in his Time", "A Kind of Artistry" and the title story.  A few of the others are rather dated, though "Basis for Negotiation" rather strikingly predicts SDI.

The other overpopulation piece is "Randy's Syndrome", by Brian W. Aldiss (8800 words). A woman living in an arcology of sorts is pregnant, but her baby goes on strike -- refuses to be born. This strike spreads to other unborn babies. The child learns to communicate with his mother, and basically announces that he doesn't want to come into the terrible world the adults have left him. It's a nice concept for a satirical story, and it's quite well executed.

Brian W. Aldiss's "Horsemen" is a little morality piece with the basic message "Earthmen are evil", telling of an alien planet full of simple -- might one say "unfallen"? -- folk, who do not know war or, I suppose the title would hint, Death, Pestilence, or Famine. "Until the Earth ship came." A bit shrill for my taste.

Aldiss's "Non-Isotropic" is a rather odd story, not unusual for Aldiss, in which he presents an obsessed scientist who makes a spectacular discovery about the nature of the universe and consciousness and perhaps God. His own relationship, or lack of such, with his short-term mate and son is the center of the story. Interesting, didn't quite work for me.

The Winter issue of the elegant and atmospheric British magazine The Third Alternative features an interview with Brian Aldiss, along with an amusing and mordant short-short, "Commander Calex Killed, Fire and Fury at the Edge of the World, Scones Perfect". A man flees a hopeless war with invading aliens, striking across Central Asia with a mysterious woman, ending up at a tea shop. That's about all, but Aldiss' control of tone is perfect: a fine miniature.

On the face of it I suppose it's not surprising that both Grand Masters in this October-November Asimov's offer rather old-fashioned, but quite effective, stories. Brian W. Aldiss's "The Hibernators" is listed as a short story but by my word count is easily a novelette. On a planet orbiting a gas giant such that it spends half a year in winter caused by eclipse, most people spend the winter hibernating. But an adolescent decides not to sleep, and is shanghaied into becoming cannon fodder in a war for control of an odd device called the Insulator. A "Conceptual Breakthrough", naturally, is on the horizon, though Aldiss resolves things just a bit unexpectedly. First rate work.

This is in many ways an aging field, and the September Asimov’s provides some evidence of that by featuring stories by two writers in their 80s. But both are close to the top of their form. ... Also solid is Brian W. Aldiss’s “Pipeline”, which also deals with the West and Islam. The action is fairly simple – the chief engineer of a pipeline leading from Turkmenistan to Turkey decides to drive its length upon completion – which turns out to be a dangerous undertaking. The story has the odd SFnal touch (driverless cars, some hints of a changed political landscape), though the action itself, and the interactions of the morally ambiguous set of characters, could come from any spy story – not a complaint, mind you – it’s well done and exciting.
Posted by Rich Horton at 6:53 PM