Kim Newman turns 60 today, beating me to that milestone by just a couple of months. He's written a lot of really fun SF/Horror, often with a bit of a Steampunk/Alternate History angle. Here's a set of my reviews of his work, mostly from Locus, but one from Tangent!

Another strong alternate historical piece is "Great Western" by Kim Newman. Newman's alternate history features an England where feudal organizations have continued into the present day. A young girl lives with the widow of a man murdered by the local squire, and the two try to resist the land grabbing of said villain, who is aided by the corrupt local law enforcement. A mysterious stranger on a motorcycle rides into town, and helps them in their struggle. The fun is in the explicit parallels with Westerns (especially Shane) and how the material of the traditional Western is transposed to fit this alternate England (called, naturally enough, "Wessex" (after Hardy).)

Finally I ought to mention a delightful set of stories found in an unexpected place: the BBC Cult website (http://www.bbc.co.uk/cult/sherlock/index.shtml). These are five Sherlock Holmes pastiches, mostly taking a rather slant view of the Holmes canon. ... Kim Newman's "A Shambles in Belgravia" is told by Sebastian Moran, as his partner-in-crime Professor Moriarty is recruited by Irene Adler to help her with a sensitive problem concerning the Ruritanian succession.

The book's longest story is also its best: "The Gypsies in the Wood", by Kim Newman. Charles Beauregard of the Diogenes Club investigates the disappearance of two children, and the reappearance of one – Davey Harvill, seemingly aged decades. He manages to find the Davey's sister, but she seems changed herself. Eight years later, journalist Kate Reed is covering the planned opening of an exhibition run by Satterthwaite Bulge, the publisher of a popular magazine of treacly fairy stories, distinguished only by remarkable illustrations. Kate runs into Charles, and quickly gathers that something odd is going on – the exhibition seems somehow haunted. Charles reveals that he is still obsessed with the Harvill case – and that Davey is the sort of idiot savant illustrator for Bulge's publications. After another disaster – an accidental death – Kate and Charles track down the Harvills, including Davey's strange sister, seemingly unaged after several years. The exhibition will be the focus for the unraveling of the mystery of what really happened to Davey and his sister eight years previously – but not before Davey's cousin Dicky is led into danger himself. The story combines the mystery, menace, and wonder of the darker sort of fairy with a pair of engaging human adults who stand outside "faery", as it were: a fast moving story, funny, romantic, moving.

Kim Newman’s “Richard Riddle, Boy Detective” is related to his Diogenes Club stories (most notably “The Gypsies in the Wood” from earlier this year), though it’s perhaps less substantial. It tells of three children who get on the trail of a supposed French Spy, and of a local anti-evolutionist fanatic who seems to have a secret.

Much of October at SCI FICTION is devoted to a Diogenes Club story by Kim Newman, “The Serial Murders”. This is about the 70s version of the Club, featuring in particular Richard Jeperson. This time he is investigating a series of murders that seem somehow to have been “predicted” by a popular British soap opera. Throw in a comely professor studying soap operas, the wicked and wickedly portrayed cast and crew of the series, and a solution that is nicely non-supernatural though the supernatural still plays a role … Newman is a very entertaining writer who has been at top form for several long stories this year.

Review of The Del Rey Book of Science Fiction and Fantasy (Locus, April 2008)

Paul McAuley and Kim Newman offer “Prisoners of the Action”, a downright goofy story about the aftermath of an odd alien invasion, with a man investigating strange happenings on the Indian Ocean island where the alien prisoners of war have been confined.

And “The Red Planet League”, by Kim Newman, is the only story in Gaslight Grimoire not to feature Holmes at all. Rather, it is told by Sebastian Moran, about Professor Moriarty taking revenge on a prat of a rival astronomer. The plot is trivial and rather silly, but the narration is delightfully comic. 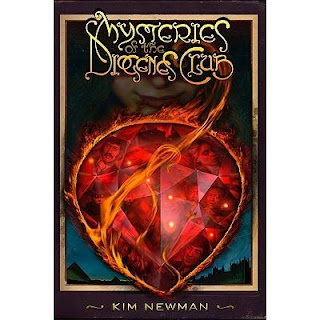 Mysteries of the Diogenes Club is a collection of some of Kim Newman’s delightful stories of a British private club that investigates unusual events. The book includes one new novella, and a very good one it is: “Kentish Glory”, subtitled “The Secrets of Drearcliff Grange School”. It’s about a girls’ school, sometime shortly after World War I, where Amy Thomsett is sent after her mother finds her sleeping on the ceiling. It seems many of the girls at Drearcliff have “Talents”, Amy’s being levitation. The story touches on the usual school story elements: the bullies, the forbidding headmistress, the daft teachers, the obscure rules – all laid out in Newman’s witty prose. Amy soon makes some fast friends, and some vicious enemies. The plot turns on the kidnapping of one of Amy’s friends: it’s mostly a frolic, though with darker elements, and it hardly matters anyway, the story is simply great fun.