Yesterday was Cory Doctorow's birthday. So in slightly belated recognition, here's a collection of my Locus reviews of his short fiction -- some of the most intelligent, politically engage, and technologicall intriguing SF of the past couple of decades.

Black Gate, by contrast, avowedly tries to publish more traditional adventure-oriented fantasy. The fourth issue, for Summer 2002, features a number of stories that fit that description just fine. The best story, though, is Cory Doctorow's "Beat Me Daddy (Eight to the Bar)", a post-holocaust tale, and straight SF, not fantasy, but I'm not complaining. A group of people are scratching out a living by scavenging the ruins of a "dresdenned" city. The narrator is a trumpet player in a casual band that represents the closest thing to real community around. When a young woman shows up and tries to get the locals to start growing plants instead of scavenging, there is some surprising resistance. The characters are well-drawn, and the central issue thought-provoking, though I thought the resolution unconvincing.

The online newsmagazine Salon has long showed interest in SF, so perhaps it's not surprising that they have published an SF novelette: "0wnz0red", by Cory Doctorow, posted August 28. It's a fine story, too, pretty much in Bruce Sterling territory, about a software engineer in a decline after his best friend has died of. Then his friend shows up alive, indeed, in excellent health. It seems he has been treated so that his autonomic functions are under software control, to his body's benefit. But the feds want to keep that stuff under wraps ... I liked it.

The December offering from Sci Fiction begs comparison with "Junk DNA", if only because both stories are collaborations by writers noted for madcap near future extrapolation. "Jury Service", by Charles Stross and Cory Doctorow, concerns a man who is selected to serve on a "jury" evaluating, for safety and utility, some tech downloaded from post-singularity, all the while worrying about a bio-hazard that seems to have infected him. The plot is twisty and interesting and frenetic, and the heart of the story, the depiction of wacky future tech and social adjustments to that tech, is neat stuff.

Finally, the online newsmagazine Salon has published another fine story by Cory Doctorow. "Liberation Spectrum" (posted January 16, 2003) crackles with speculation. A "mobile multinational" pushing "cognitive radio" faces deep internal stress after there attempt to wire a Mohawk reservation and free them from the national telecommunication monopoly is resisted by the Canadian feds. The speculation is interesting technologically, and interesting sociologically, and the personal aspect (focussed on the corporation's founder and CEO) works as well. It's often funny, and also moving. And in many ways it's reminiscent of a Campbell-era Analog story, but 21st Century style, post-Bruce Sterling style.

DAW's "monthly magazine" of themed anthologies offers a reliable if seldom exciting source of new SF and Fantasy. 2003 closes with Mike Resnick's New Voices in Science Fiction: 20 short stories by new writers (variably defined: from complete unknowns like Paul Crilley to well-established writers like Kage Baker and Susan R. Mathews). For the most part the stories seem more promising than outstanding. A high point is Cory Doctorow and Charles Stross's "Flowers From Alice", a very clever story of posthuman marriage with a delightful ending twist. 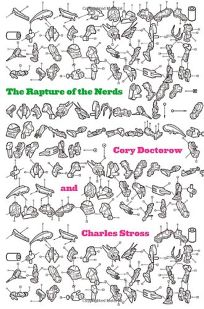 I mentioned Emswhiller's story from the second issue of Argosy, dated May-June. I think the magazine is successfully straddling genres according to its apparent ambition. Besides the Emshwiller story there is a fine mystery by O'Neil DeNoux, a nice humorous Lucifer Jones piece from Mike Resnick, and a very enjoyable wild pair of novellas from Cory Doctorow and Charles Stross. Their 2002 Sci Fiction novella "Jury Service" is reprinted, followed by a brand new story, "Appeals Court", that follows directly from the first. Our hero, Huw, carrying an Ambassador from the post-Singularity "Cloud" of uploaded intelligences, makes his way willy-nilly to a much-changed U.S. There he finds primitive Baptists, petroleum trees, a hypercolony of flesh-eating ants, and another Church promoting lots of sex. And he hasn't escaped Judge Judy either ... Like the first story, it's full of whipcrack smart satire and wild speculation – fun stuff. [These became a novel, The Rapture of the Nerds.]

Infinite Matrix was more or less missing in action last year, but so far this year it is in fine form. Perhaps the most talked-about short story of the year to date is Cory Doctorow's "i, robot". Doctorow is doing a series of stories re-examining SF classics from his contemporary political viewpoint. "i, robot" considers Asimov's robot stories (more The Caves of Steel than I, Robot, I thought) as well as George Orwell's 1984. Arturo Icaza de Arana-Goldberg is a detective in Toronto, raising his daughter alone after his wife defected to Eurasia. UNATS (North America) is engaged in perpetual war with the rest of the world, while trying to maintain "Social Harmony" by coercive means including restricting genetic engineering and robotic development (such as true AI). One day his daughter disappears, and Arturo tries to track her down, ending up in a tangle of loyalties – his wife may be involved, as well as scary advance robots, and on the other side the less than pleasant folks from "Social Harmony". I think it's a fine story – better than 2004's "Anda's Game" – my only quarrel is that while the depiction of the dystopian situation in North America is only too plausible, the depiction of the fairly utopian alternative in Eurasia is sheer wish-fulfillment. Still – a very thought-provoking work, well worth the notice it has received.

Cory Doctorow's “Human Readable” opens as Trish, a lawyer, and her boyfriend, a scientist, visit the man’s family for the first time. On the way there, the emergent quasi-AI that controls traffic breaks down – the first, it turns out, of many such breakdowns. Trish becomes convinced that the extended network of tiny computing devices that is used for traffic control and other beneficial things is vulnerable to manipulation, and needs to be made “human readable”, even at cost to its efficiency. Her boyfriend is convinced that it works best if left alone – that occasional breakdowns are a small price to pay for the huge ultimate benefits. The story demonstrates (not quite convincingly, mainly because the tech is only handwaved in) that powerful interests can fiddle with the network so that, for example, rich people avoid traffic jams, while people on the outs with those in power constantly lose cellphone connectivity, and so on. Doctorow makes it more interesting by interweaving Trish’s love story with the political story. It’s good stuff, though I thought not quite outstanding. I note that on the surface it’s purely about the dangers and political problems of a near-future technological advance, but that it is also a pretty straightforward metaphorical look at the dangers and political problems of free-market capitalism.

I didn’t find the second issue of the new online magazine Jim Baen’s Universe quite as involving as the first. Still, it features a very generous helping of stories and articles, many quite entertaining. I liked Cory Doctorow’s “When Sysadmins Ruled the Earth”, a post-holocaust novelette in which a bio-engineered plague kills most of humanity, and for a brief time a group of computer geeks try to set up a new world order of sorts.

And an exciting new source of online fiction has appeared: Tor.com, associated with the publisher of course. The first three text stories (there is also a graphic story) appeared in July and August, all from “hot new writers” in a sense, ages ranging from 37 to 44: Cory Doctorow, John Scalzi, and Charles Stross. To which generation do these belong? I don’t know, but I do sense that they (perhaps especially Doctorow and Stross) feel that they are actively in dialogue with each other. The best of these stories is Doctorow’s “The Things That Make We Weak and Strange Get Engineered Away”, about a quasi-religious, nearly monastic, organization called The Order, the members of which are programmers who live communally. It seems utopian, but the protagonist learns some of the costs when he ventures outside to chase the source of an “anomaly” in the datastreams he monitors, and realizes who he has been working for (indirectly) and the effect of his work on ordinary people.

Another of the bumper crop of new unthemed original anthology series has put out its second number. Fast Forward 2, unlike books from Jonathan Strahan and Ellen Datlow, is quite overtly an all-Science Fiction book. It also features no fewer than three collaborative stories. SF, probably in great part because of its commercial roots, has long featured a somewhat high proportion of collaborations, but three in one volume these days is unusual. In each case the partners are of broadly similar age and notoriety, suggesting that the contributions of each writer are likely about equal. The longest and most ambitious is “True Names” by Cory Doctorow and Benjamin Rosenbaum, nearly a novel. This is apparently a new entry in Doctorow’s ongoing series of riffs on famous SF stories. It concerns a far-future set of civilizations, mostly living in virtual environments. (That being the main nod to Vernor Vinge’s famous model – otherwise there is less thematic connection to the predecessor stories than in Doctorow’s “I, Rowboat”, “I, Robot”, and “Anda’s Game”.) One civilization is democratic, consisting of numerous entities vying for control, while the other is more or less totalitarian, ruled by a single strict program. The two polities battle across the Galaxy, not always noticing the threat of a third virtual environment, which seems lifeless but unstoppable. The plot involves computer program sex (sort of) and heroism, and questions about reality versus simulation – at multiple levels – and it’s fast-moving and interesting but for me it fell into the trap of excessive abstraction. I never quite believed in – nor always understood – what was going on. Nonetheless, it’s quite a thought provoking effort.

Cory Doctorow’s “Martian Chronicles” is the latest of his stories taking their titles from classic SF, though the story itself doesn’t really react to or comment on Bradbury. It’s about a boy on his way to Mars, who is really good at playing a Sims-like game mimicking a business setup. He makes a couple of friends who take different roles in the game, and learns, in Heinleinesque fashion (complete with the Heinlein trick of winning arguments by framing the opposing position as you desire) to know better, and to understand what’s really going on at Mars, where the economy is supposedly modeled on the game he plays.

Robot Uprisings is John Joseph Adams' latest project, teamed this time with Daniel H. Wilson. The theme is clear enough, and the stories as a set are a fine examination of variations on it, from a nicely varied set of writers too, both from within and without the genre. As with many themed anthologies, read all at once there might be a bit of a sense of too much repetition. But by and large this is a strong book.

My favorite story was a reprint that I missed on its first appearance in 2010. Cory Doctorow's “Epoch” is about BIGMAC, a “doomed rogue AI”, and his story is told by Odell Vyphus, the sysadmin who has inherited responsibility for BIGMAC. Apparently BIGMAC was something of a dead end – “there just weren't any killer apps for AI”. Now it's obsolete, and expensive to maintain, and Odell's boss wants him to kill the AI. Naturally BIGMAC finds out about this plan, and implements its own plan to save itself. The story is funny and intelligent and moving and believable – the same can be said for the characters. Very strong work.
Posted by Rich Horton at 7:58 AM