I've been busy the past few days -- my son Geoff got married on Saturday. And what with all that, I haven't been keeping up with this blog. Some time in the past week, I can't remember when exactly, was Fran Wilde's birthday. Fran's an exciting writer, and I've got to know her a bit at a few recent conventions, so I can say she's a neat person too. I hadn't exactly reviewed enough of her short stories for one of these collections, but there were a couple stories I didn't get to in Locus (my fault!) so I wrote a bit extra here (and, actually, I had already written more about "Clearly Lettered" in my Hugo ballot summary.) 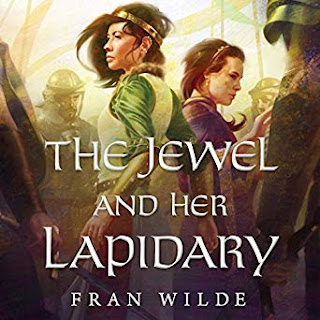 The Jewel and the Lapidary by Fran Wilde is a novella from Tor.com’s line of slim books. The central fantastical idea is pretty cool: there is a valley protected from outsiders by powerful jewels that are wielded by the ruling family (“Jewels”) but contained by Lapidaries who each bond to a single Jewel. This story concerns the betrayal and fall of the valley, leaving one surviving Jewel and her Lapidary, both fairly insignificant young women. They must find a way to resist the invaders, and at least to prevent them using the valley’s mines to supply jewels to allow them to cement and extend their conquest. It’s a slim story, fairly uncompromising in its plot, nicely written: I liked it, and I suspect the world it’s set in might yield more fine stories. [And, hey, look -- here's another story in the same universe: The Fire Opal Mechanism! I'll get to it soon!]

“Clearly Lettered in a Mostly Steady Hand”, by Fran Wilde – a story of a visit to a museum exhibition that in the end seems to be a “freak show”, and which has a distinct and scary effect on the visitor. It’s told in the second person, and this is (perhaps rarely!) the exactly correct choice for this story, as the reader slowly realizes that the act of viewing the perhaps grotesque (or just misunderstood?) exhibits has parallels with how they see people who are different. This is a story that improved for me immensely on rereading – either because my mood was different, or because I saw more on a second pass -- the latter, really, is I think the truth.

Uncanny’s 24th issue is subtitled Disabled People Destroy Science Fiction, and it features stories from writers who identify as disabled. Not all the stories explicitly feature disabled characters, but most do, and if a few read more as well-intentioned homilies than stories, the best here are very fine indeed. Fran Wilde is as ever challenging and intriguing with “Disconnect”, about a woman whose bones and joints disappear from her body in her sleep, usually recoverable; and her mentor, an older professor who is getting younger.

Expanded look at "The Synchronist", from Infinity's End

In Locus I wrote: "Fran Wilde’s “The Synchronist" is a pretty challenging story about the importance of consistent time-keeping for long distance space travel". I didn't write more because, well, Infinity's End had a lot of exceptional stories and I didn't have much space. But this is a really fine, interesting piece about a woman and her father, both of whom are experts in understanding and maintaining the consistency of timekeeping on interstellar travel. It's a wild story, and sometimes a bit hard to follow, but still fascinating.

Uncanny in January-February features another challenging story from Fran Wilde. (I noticed that the last time I wrote about Wilde, I called both stories I covered “challenging”. I’m sure I did it on purpose – I’m even more sure Wilde does it on purpose.) “A Catalog of Storms” is built around a number of names given to different kinds of storms that menace a seaside village. But the story concerns the “weathermen” of that village, people who have been transformed into denizens of the air, and who can protect the town from the storms. Sila’s great aunt was one of the first weathermen, and her Mumma is terrified that she’ll lose one of her daughters the same way … and, indeed Sila’s sister Lillit is shown transforming in the opening sequence – and to her Mumma’s horror, Sila harbors the same ambition. The story concerns the stress between the heroic life and the mundane, perhaps, but more than that it is involved with language, and with letting go.