Today is Lawrence Watt-Evans' birthday. Lawrence has written a ton of very enjoyable fantasy, and a fair amount of pretty cool SF as well. I reviewed A Young Man Without Magic on this date last year ... one of my real favorites among his books, alas, first in a series that was aborted when his publisher abandoned it. Today I review another book, the concluding book in a satisfying series that, to say true, I had higher hopes for after the first book. 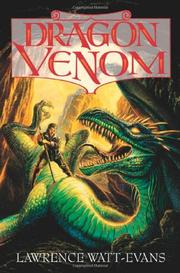 Dragon Venom is the conclusion to Lawrence Watt-Evans' fantasy trilogy that began with Dragon Weather (1999) and continued with The Dragon Society (2001). Overall I think the trilogy well worth reading. I will say, though, that I thought the first book clearly the best. This conclusion is a satisfactory finish to the series, resolving the main issues quite well, leaving open potential further stories in the world but leaving no requirement whatsoever for a continuation. The idea that resolve the main conflict is logical and convincing (in context), though I did think the protagonist arrived at his solution a bit easily, in some ways. The main problem with this book is that the action is a little disjointed, and that while there are new ideas introduced there is nothing as generally intriguing as the introduction of the whole situation in book 1. Also, the nature of the hero, albeit well displayed, is such as to leach some emotional satisfaction from his success.

As the book opens the hero, Arlian, is leading a group into a dragon cave to exterminate four more dragons, in his continuing quest to find and kill every dragon in the world. For Arlian is a dragonheart, made so by ingesting a mixture of dragon venom and human blood while he witnessed dragons destroying his boyhood village. Dragonhearts live for 1000 years, and have unnatural strength, charisma, and healing ability. But at the end of their life they give "birth", in a way, to a dragon that has been developing in their hearts for all this time. Also, they are unable to feel human emotions very strongly -- love and joy are closed off to them. In the previous books, Arlian discovered a way to kill dragons, and a way to remove the taint of the dragon from dragonhearts. Now, under the sponsorship of the ruler of the Lands of Man, the Duke of Manfort, he is tracking down dragons based on records of destroyed villages, hoping to have himself cleansed of his taint, along with every other dragonheart, once his quest is complete.

But there are problems. For one thing, there are hints that some of the dragons are wise to Arlian's quest, and are hiding themselves more securely. For another, most of the other dragonhearts are loath to abandon their long lifespan, and they have defied the Duke and moved to another city, and begun to cooperate with the dragons. Thirdly, the dragons, enraged by Arlian's actions, have taken to attacking many more villages than previously, despite Arlian's attempt to spread the knowledge of how to kill dragons, and the equipment to do so, as widely as possible. And finally, worst of all, it appears that Wild Magic from beyond the Lands of Men is encroaching on these lands -- it seems that the dragons, which are consist of tightly-bound magic, by their very existence shielded the Lands of Men from the Wild Magic. And the fewer dragons there are, the less shielding.

This last problem forces the Duke of Manfort to order Arlian to cease his attacks on dragons. Arlian, frustrated, decides to head to the border areas and beyond, in hopes of learning something about the wild magic. There he encounters wizards and other, stranger, magical creatures, and begins to formulate some ideas about the nature of magic. Back home he begins some rather controversial experiments, hoping to find a way to contain magic in a more benign form than dragons, while retaining the shielding aspects. But the dragons, and their representatives, the rogue dragonhearts, are not about to take this lightly ...

The solution is fairly logical, and pretty well set up in the overall trilogy. As I suggested, I did feel that perhaps Arlian came upon it just a bit conveniently. Also, his experiments are, er, ethically dicey, to say the least -- it all makes sense in the context of the books, but it does give one pause. So, a book I enjoyed, part of a trilogy which is certainly worth reading -- but not a brilliant work.