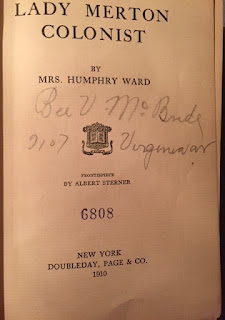 Mary Augusta Ward is considered an English writer, and she spent the great bulk of her life in England, but she was born in Tasmania in 1850. Her father was Tom Arnold, a school inspector in Tasmania and later a Professor of Literature at the University of Dublin, then a lecturer in History at Oxford. Her grandfather was Thomas Arnold, the legendary Headmaster of Rugby College, and her uncle was the great poet ("Dover Beach") and critic Matthew Arnold. Her brother-in-law was Thomas Huxley, and so her nephews were Julian and Aldous Huxley. (Aldous was named after a character in one of her novels.) Mary Augusta married Humphry Ward, a lecturer at Oxford, later a journalist. Their son, Arnold (natch!) became a Member of Parliament. She began publishing with a children's book (Milly and Olly) in 1881. She published her books as by Mrs Humphry Ward. Later in her life she became a leading opponent of women's suffrage, and the head of the Women's National Anti-Suffrage League. That stance seems uncharacteric today, for she was otherwise very active in liberal causes of the day: she was a campaigner for better education for the poor (she founded a school now called the Mary Ward Centre), she set up a sort of day care center to allow poor women to work more easily, and she promoted University education for women, initially starting the "Lectures for Women" program at Oxford. .

Her first major success, and still probably her best-known novel, was Robert Elsmere (1888). There were no bestseller lists at the time, but I suspect it would have ranked very highly on any such list. It's the story of a churchman and the problems in his marriage caused by his theological differences with his much stricter wife. I saw a copy once and passed -- it looked rather dry. Two of her novels, Lady Rose's Daughter (1903) and The Marriage of William Ashe (1905), were each the bestselling novel of their year in the US, according to Publishers' Weekly. 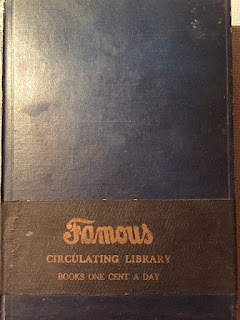 The novel at hand was serialized in 1909 and came out in book form in 1910. It was published in England as Canadian Born, but retitled Lady Merton, Colonist, in the US. I bought it in part because it looked like a good read, but also because of another feature of the physical book. It has a broad piece of tape over the lower part of the cover, labeled Famous Circulating Library, "Books One Cent a Day". Commercial circulating libraries were once a major means of book distribution, but by about the middle of the 20th century they disappeared, rendered unnecessary by the spread of public libraries, and the introduction of relatively cheap paperback editions. 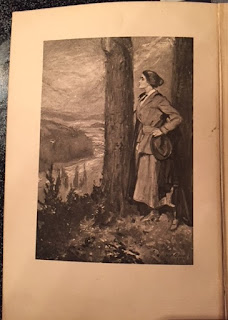 My edition, possibly the American first, was published by Doubleday, Page. There is a frontispiece by Albert Sterner. (His version of Lady Merton does not match my image of her.) It is signed by, I assume, the first owner, Bee V. McBride, who lived on 9107 Virginia Ave. (There are probably many Virginia Avenues, but I assume this is the one I am fairly familiar with, on the South Side of St. Louis.)

The book opens with 28 year old widow Elizabeth, Lady Merton, on a train in the middle of Canada, accompanying her brother Philip in a private car on a trip from Quebec to Vancouver. (Her late father was a major investor in the railroad.) Lady Merton's husband died in the Boer War, very shortly after their marriage.

She finds herself enchanted by the Canadian landscape, to the point of boring her brother, who is much younger, and in doubtful health (not helped by his drinking). Then, somewhere in Manitoba, the train is halted because a sinkhole has made the track unusable. While repairs are made, she meets an energetic mining engineer now working for the railroad, who arranges for their comfort while supervising repairs to the track. She takes an immediate interest in this man, George Anderson, a native of Manitoba, and she is fascinated by his advocacy for Canada and its future. Anderson, it soon becomes clear, is a man going places -- soon he will stand for the Canadian Parliament. He soon begins to have an influence on Philip, as well.

So, you can see where THAT is headed. But there are complications. For one, Elizabeth's birth and wealth and the fact that her home is in England seem to make a relationship with a Canadian inappropriate. Add to that the fact that she already has a courter -- Arthur Delaine, a 40 year old Englishman who feels the need to marry, and who thinks Elizabeth appreciates his fascination with the classics. And Delaine happens to show up in Winnipeg, with the evident intention of fixing his position with Lady Merton.

The more severe complication, however, is George Anderson's family history. His father was an alcoholic, who caused his house to burn down, killing Anderson's mother and sisters, while he was drinking. Anderson thinks his father dead, but a mysterious man is following him to Vancouver ... and at a stop in the mountains, this man approaches Delaine -- telling him, of course, that he is Anderson's father.

Much ensues -- an attempt by Anderson to rehabilitate his father, an attempt by his father to rope Anderson in on a dicey mining venture, Anderson rescuing Philip from drowning, and then his father escaping and getting involved in a criminal venture, with fatal results.

It's all pretty enjoyable stuff, though by the end it wears out its welcome just a bit, as Elizabeth returns to England, and Philip's health becomes a determining factor. I thought that something of an unnecessary complication, to be sure, and in the end, things resolve more or less as we have expected all along, with a curious epitaph recording an episode of the happy couple's life in Canada.

So, as I said, I did enjoy this book. It's not as didactic as the reputation of some of Mrs Ward's other novels, though to be sure she is quite clear on the proper place of a woman as her husband's support in a marriage. (That said, she is also quite clear on a woman's right to choose her own life within those constraints, and a woman's value and versatility and also her right to an education.) More than anything, the novel is a paean to Canada, especially to the dream of Canada as it was becoming its own nation, as it was experiencing its own version of Manifest Destiny. I wonder -- is it remembered at all in Canada?