[Angélica Gorodischer turns 90 today, and in honor of her birthday, I'm posting this review I did for Locus Online back in 2003, and I've added the snippet I wrote about her book Trafalgar for Locus (the print version) in 2013. The original Locus Online review of Kalpa Imperial is here.] 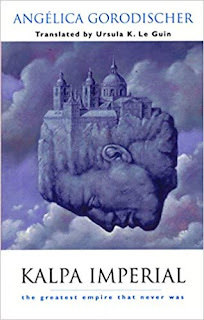 Here before me is a delightful book, Kalpa Imperial, by Angélica Gorodischer. It is a fantasy about "The Greatest Empire That Never Was", as the subtitle has it. Gorodischer is Argentine, and the translation from the Spanish is by Ursula K. Le Guin -- a recommendation in itself! A portion of this book was published in Starlight 2 a few years ago. The voice seems very reminiscent of Le Guin: hard to say if that's reflective of the original work or of her translation.

The book is a compendium of several separate stories, mostly told by a professional storyteller (who also has an important additional role in one story), concerning the history of "The Greatest Empire That Never Was". Most of the stories tell of Emperors and Empresses, some good, some bad, some mad -- how they came to power, how they fell from power, how they ruled. The stories are often romantic, but the romanticism is tinged by a sort of earthiness, and a realism that does not quite become cynical. The stories are nicely imagined, sometimes funny, sometimes brutal. The whole is billed as a novel, but the stories work fine separately, and are really linked only by geography and the voice of the storyteller, so it's more a linked collection of short fiction, in my view.

There are eleven stories, or chapters, arranged in two books. The opening piece, "Portrait of the Emperor", tells us that a good man now sits on the throne of the Empire, and then goes on to tell of the founding of the empire, by a weakling boy who learned a different kind of strength. "The Two Hands" is a fable-like story of an usurper who ended up spending twenty years confined in his bedroom. "The End of a Dynasty, or The Natural History of Ferrets" tells of a young Crown Prince, son of a cruel Empress and a deposed Emperor, who grows up torn between the evil influence of his mother and the countervailing touch of a couple of kindly workmen. "Siege, Battle, and Victory of Selimmagud" is an ironic tale of a thief and deserter and his encounter with the General besieging the title city. "Concerning the Unchecked Growth of Cities" is a lovely long description of the varying history of a Northern city, sometimes the capitol, sometimes ignored, sometimes something quite else.

Book two opens with "Portrait of the Empress", in which the storyteller who has been narrating these tales is recruited by the Great Empress to tell her of her Empire's history. She in turn tells him of the woman who rose from poverty to become the Great Empress. "And the Streets Empty" is a dark story of the vengeful destruction of a city by a jealous Empress. "The Pool" concerns a mysterious physician, and his encounters with those plotting to overturn the current dynasty. "Basic Weapons" is a colorful and macabre piece about a dealer in people, and a rich man, and obsession. "'Down There in the South'" is a long story of an aristocrat with a dark secret who is forced to flee from the ruling North to the rural South, and who is fated to change history when the North comes to invade. And "The Old Incense Road" tells of a mysterious orphan, a mysterious merchant, a caravan, and some "stories within the story", all eventually concerning another change of rulers.

The stories are full of humor and tragedy, of cynicism and romanticism, of secret identities, of wisdom and folly, of blood, of nobility. The fantastical elements are slim: this is perhaps what is called sometimes "Ruritanian" fantasy -- set in a different world that much resembles ours. At the same time the landscapes and characters and events are heightened in color, so that if there may not be overt magic, the ordinary seems magic enough. The feel is certainly fantastical.

It is often remarked that Americans (indeed, English language readers in general) tend not to read a lot of fiction in translation. This does seem true of SF readers -- we are happy enough to read books by Englishmen and Australians and even those wacky Canadians, but it tends to be hard to find books from other languages. I'm not sure this is entirely, or even largely, because Americans (or Englishmen or Australians or whomever) are particularly xenophobic. Rather, there isn't that much available in translation, for several reasons. Acquiring a foreign language book means the publisher (or author) must pay extra for a translator. Once translated the book is different from the original -- most likely not as good. (And a bad translation can do long-term harm, in part by making it harder still to obtain a good translation. (I have heard that the English publishers of Stanislaw Lem's Solaris have refused to contract for a new translation, even of such an important novel, even though the existing one is notoriously poor (apparently a two step job, Polish to French to English).)) Finally, the English language book market is pretty full of books in English -- perhaps publishers simply feel there are already enough books. (Perhaps in smaller countries there might be more pressure to find books published in other languages -- assuming the readers have the same appetite for fiction, but fewer writers to provide it.)

But even if our failure to read much SF in translation is understandable, it is nothing to be happy about. Thus I'm delighted to have a chance to praise a book from an Argentine writer. And I'm delighted that the translation reads wonderfully -- though to be sure I cannot speak directly to its accuracy. Kalpa Imperial is a lovely book -- praise is due Le Guin and to the folks at Small Beer Press for bringing it to our attention; and much praise is due Angélica Gorodischer for writing it.

Happily, the amounted of translated SF available in the US has expanded tremendously, most notably evidence by Hugos for China's Cixin Liu and Hao Jingfang and for Dutch writer Thomas Olde Heuvelt. Indeed, short fiction in translation is a regular feature in magazines like Clarkesworld. As for Gorodischer, at least one more of her books has been translated into English, also SF: Trafalgar, back in 2013. Here's what I wrote about that book in the May 2013 Locus:

A few years ago Small Beer Press published the Argentine writer Angélica Gorodischer's lovely mosaic novel (or linked story collection) Kalpa Imperial (translated by Ursula K. Le Guin). Now they give us another linked collection from Gorodischer, Trafalgar. (This time Amalia Gladhart does the translation.) The stories are all about a merchant named Trafalgar Medrano, who has a spaceship he calls the Clunker, and who travels all around the Galaxy buying and selling things, and more importantly, encountering strange planets and stranger societies. There is a sort of club story feeling to the tales -- almost a resemblance to Dunsany's Jorkens -- and there is also a hint of Le Guin in the ethnography. The book is enjoyable throughout -- Trafalgar's voice is absorbing, and so is that of the narrator (who may or may not be the same person throughout) -- and the societies Trafalgar encounters are interesting and wittily presented. My favorite was "Trafalgar and Josefina", a tale told to the narrator through her somewhat eccentric old Aunt Josefina, very very funny in its framing (that is, in Josefina's comments on the story) and turning darker as we learn of Trafalgar's visit to a planet with a very strict caste system, ruled by a randomly chosen person of a lower caste, who makes the mistake of falling for a married woman.
Posted by Rich Horton at 3:01 PM