Charles Coleman Finlay was born July 1, 1964, so I am exhuming this review I did of his first novel, The Prodigal Troll, for his 54th birthday. Charlie, who has been using the form of his name "C. C. Finlay" as a byline in recent years, has been editor of The Magazine of Fantasy and Science Fiction since 2015. He's been publishing short fiction, and a few novels, since 2001 (his first a story in F&SF told all in footnotes, and called, appropriately, "Footnotes"). I think he's an excellent writer of fiction, and I hope his editorial duties don't wholly suppress his auctorial voice -- so far, alas, we haven't seen any new fiction since 2015, so he seems perhaps to be following the path of Gardner Dozois, if not quite that of John W. Campbell, Jr. And, that said, I've been really pleased with his work at F&SF. 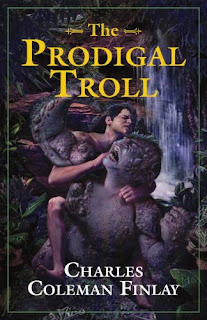 The Prodigal Troll was his first novel, published in 2005. It was expanded from some previously published short stories. A couple appeared in F&SF, and one interesting one appeared in Black Gate. This last, "The Nursemaid's Suitor", is actually the first part of the novel, but slightly -- though very significantly -- changed. As Finlay notes, it's the story that he would have told if the story was meant to be about the nursemaid and her suitor, rather than about Claye/Maggot, the actual protagonist of the novel.

In a fairly standard (but nicely presented) medievaloid fantasy world, Lord Gruethrist's domains are, at the open, taken over by an ambitious rival. Or, I should say, Lady Gruethrist -- in this world, all land is owned by women. Men fight wars and otherwise act for their wives, but only women can own property. Well, women and eunuchs (who are addressed as "she" and "her".) Lord and Lady Gruethrist have an infant son, Claye, and he has detailed one of his best warriors to help the child's nursemaid to escape to safety. The warrior in question, it turns out, has an unrequited passion for the nursemaind. But on their escape they learn that the situation is more dire than they expected -- it seems the political winds blow entirely against Lord Gruethrist, and all his allies are either dead or subverted. They try to make a home in an deserted cottage, but come to grief -- however, the child survives, because he is adopted by a troll.

Trolls, it seems, are an endangered humanoid species, living in the mountains. Claye, now called Maggot, is raised as a troll, but his differences soon become apparent. His good heart and intelligence serve him in good stead, against the suspicions of the dwindling bands of trolls -- victims of human incursion and their own inflexibility. Eventually Maggot comes out of the mountains, where he sees a woman who completely entrances him. Much of the rest of the novel concerns his fumbling attempts to attract her attention, leading to involvement in a human war, and eventually in corrupt human politics. The resolution involves some expected but satisfying coincidences, and an honest and not standard conclusion -- which quite effectively closes the novel's story but leaves open the possibility (but not necessity) of sequels.

It turns out, to be sure, that there were no sequels, and only three further novels, the "Traitor to the Crown" trilogy of fantasies set during the American Revolution. But Finlay's short fiction has been consistently excellent, and I will include a selection of my reviews of his work in another blog post.
Posted by Rich Horton at 3:23 PM