I wrote this review for Locus back in 2004, and on this the 140th anniversary of Edward James Moreton Drax Plunkett's birth, it seems appropriate to repost it here. 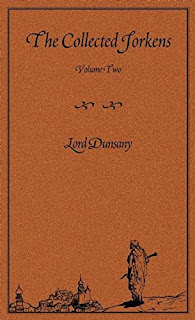 Lord Dunsany's reputation is founded on his highly atmospheric, often ironic, often Romantic, fantasies: several collections of short stories from the first two decades of the past century, and novels such as The King of Elfland's Daughter. These are remarkable works, and extraordinarily influential – I would call him the second most influential fantasist of the 20th Century. But he wrote little in that vein after 1924. What was he writing later in his career? Partly, an enormous wad of tales told in a club, by an aging raconteur named Joseph Jorkens, a man who seemed to have traveled everywhere. These stories are the admitted model for Arthur C. Clarke's Tales from the White Hart; and presumably at least an indirect model for many further bar tales. (Though one should not forget P. G. Wodehouse's Mr. Mulliner.)

These stories are full of ironic humor, much coming from Jorkens' insistence that, at the very least, none of his tales can be proven false. He is quite sensitive about this, and those few club members who doubt him often get a subtle comeuppance. Fortunately, the frame narrator (ostensibly Dunsany himself) is always ready with a whiskey and a prompt to urge another story from Jorkens. Dunsany's control of both his narrative voice and of Jorkens' voice is a continuing pleasure.

The humorous aspect of the Jorkens tales seems at the forefront of their reputation, but in fact many or most of the stories have rather a different flavor taken separately from their frame. To be sure, some are downright funny – I delighted at the perfectly prepared punchline to "A Drink at a Running Stream", in which the notorious whiskey drinker one-ups the rest of the club in describing the best drink he ever had. But more often the stories have a tinge of horror, as with the stalking trees in "A Walk to Lingham"; or Jorkens' terrifying climb in "The Golden Gods". There is also often a very characteristic Dunsanian melancholy, as in "The Witch of the Willows", wherein Jorkens is offered the love of a beautiful witch but rejects her for the ordinary England of the 20th Century – and regrets his choice forever. Surely a metaphor for the loss of the unspoiled countryside in exchange for mod cons. Other tales are mainly tall tales, amusing in their exaggeration but not laugh out loud funny, as in "The Escape from the Valley", in which Jorkens carefully calculates how many ducks are required to lift him into the air.

Dunsany is naturally best known as a fantasist, and most of these stories are either fantasies or somewhat implausible adventure tales. But he does venture into Science Fiction once or twice, in particular with two tales of journeys to Mars. These are "Our Distant Cousins" and "The Slugly Beast", in which a friend of Jorkens travels to Mars by aeroplane. These are not terribly hard SF, to be sure, but they do offer the real SF frisson, and the real Jorkens snap as well.

I was thoroughly enchanted by this collection – a marriage of elegant and balanced prose, wry and ironic humor, and an always fertile imagination. Very highly recommended.