Capsule Birthday Reviews: A Plague of Demons and Worlds of the Imperium, by Keith Laumer

Capsule Birthday Reviews: A Plague of Demons and Worlds of the Imperium, by Keith Laumer

Today would have been Keith Laumer's 93rd birthday. I decided, then, to exhume these two capsule reviews I did on SFF.Net long ago, of the first two non-Retief Laumer books I ever read. Keith Laumer (1925-1993) was in the Army, and later the Air Force, and also in the US Foreign Service. His military and diplomatic experience was definitely reflected in his fiction. He also graduated from my alma mater, the University of Illinois. Still, while I've enjoyed some of his fiction, I've never been a huge fan. I thought the Retief stories got tedious after a few examples, and when I was first reading SF magazines I read some of Laumer's later, much lesser, work (composed after a devastating stroke, which by all accounts didn't just affect his cognition but his personality, in a quite terrifying way). Later acquaintance (as with the two novels here) proved him a solid writer of fast-moving adventure, and sometimes an interesting writer, but not a great writer.

I don't think I had ever read a Keith Laumer novel, except maybe a Retief book or two long ago, before I decided to rectify that omission a couple of decades ago. I noticed that A Plague of Demons seemed highly regarded.  I found a used copy and read it.  It's from about 1965. 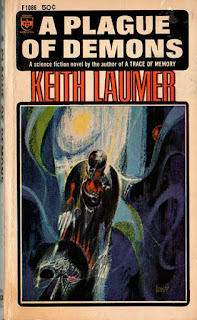 It's an interesting book, not bad at all. A secret agent type is assigned to investigate the disappearance of a number of military types -- it's assumed that somebody is assembling some sort of army (shades of the Peter O'Donnell Modesty Blaise book I had read at the same time, Sabre Tooth).  It turns out things are much stranger -- with the help of a number of surgical enhancements to his brain and body, our hero is able to detect that the military types are being kidnapped by strange doglike aliens -- and that only the brains are being taken.  Soon he finds that aliens have infiltrated Earth much more widely than he thought.  Fortunately, there is a long-term secret network of humans working against all threats to humanity -- and he escapes temporarily to them.  But eventually the doggies catch up -- and things keep getting stranger.  Laumer doesn't stop short of the implications of his ideas, but keeps following them.  It's not great stuff, and it's a bit wacko at times, but it is fun.  It also fits interesting into a recent rasfw thread: "Purely Evil Races".  Laumer's conceit is that the aliens in this book indeed fit the "purely evil" mold -- and that they are fighting a war with a "purely good race".  But, says Laumer, those "good guys" are really just as inimical: humans are much better because they are a mixture of good and evil.  Bit of Manicheanism there, I suppose.

Another well-regarded early Laumer novel seems to be Worlds of the Imperium. I decided to get the issues of Fantastic, from 1961, that this novel was serialized in because Dan Goodman, on Usenet, has claimed several times that they include a brilliant section which was excised from all the book versions (though Damon Knight included the section as a standalone in the anthology A Century of Science Fiction.) Worlds of the Imperium, by the way, was first published in book form as an Ace Double, backed with one of Marion Zimmer Bradley's lesser known novels, Seven From the Stars. As it happens, I've also read the Bradley novel in its magazine appearance (another Cele Goldsmith issue, the March 1960 Amazing). I suppose I'll find a copy of the Ace Double and assemble an Ace Double review! 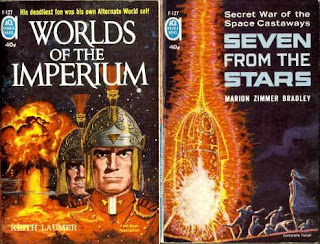 The novel is about Brion Bayard, an American diplomat (does Laumer write about anybody but diplomats?  there's Retief, of course, but also the hero of A Plague of Demons, and now this) who is kidnapped in Stockholm.  His kidnappers inform him that he has been taken to another timeline, and that he can never go home.  (To convince him, one of the things they show him is a strange tableau formed of a man and a plant as they change across the timelines -- it's odd and effective but quite uncharacteristic of the rest of the novel, and I guessed, correctly, I'm quite sure (based on checking a paperback copy of the novel), that that was the part Dan Goodman was talking about.)  It turns out that the timeline of the kidnappers is the only one which has mastered the ability to cross timelines -- except for one other timeline, in which a cruel dictatorship rules, and which has been sending missions with atomic bombs to try to destroy the first timeline.  And the dictator is -- that timelines version of Brion Bayard!  The kidnappers try to convince him that decency requires that he impersonate Bayard, take over the dictatorship, and stop the atomic bomb invasion.  Eventually he agrees (helped by witnessing one such invasion), and he is sent to the dictator's timeline -- only to run into an unexpected snag.  It's a fun adventure book, with a bit of twistiness, but not always at the right times.  Nothing great, but a decent read.