Lloyd Cassel Douglas was born in Indiana in 1877 as Doya C. Douglas. (I don't know when or why he changed his name.) His father was a Lutheran Minister, and like many PKs (preacher's kids) he moved around a fair amount as a child. He was himself ordained a Minister in 1903, and served as a Pastor of Lutheran churches and later Congregational churches in a variety of places (including at the University of Illinois, my own alma mater), making his way to Los Angeles and finally to Montreal (which means he qualifies as a Canadian writer! Yay, more Canlit!) In 1927 he retired from the pulpit to write. He died in 1951, having published nine novels, a memoir, and a book derived from a journal mentioned in Magnificent Obsession. Besides The Robe, at least three other novels (White Banners, Magnificent Obsession (twice), and The Big Fisherman) became movies. For all this success, he seems largely forgotten these days, though at least The Robe and Magnificent Obsession (perhaps aided by the films) do seem to have some remaining reputation. 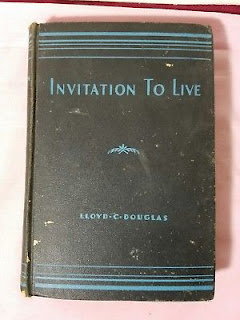 Douglas was a very distinctly Christian writer, didactically so. Invitation to Live is certainly an example. It was published in 1940. My edition is a wartime reprint from Grosset and Dunlap, complete with notice assuring us that while it is published in accordance with regulations to conserve paper it is complete and unabridged. 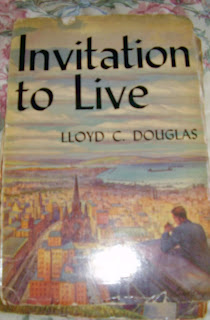 The novel opens with Barbara Breckenridge, just about to graduate from college, receiving a generous legacy from her grandmother, with one stipulation -- that she attend Trinity Cathedral, in Chicago (she lives in New York), the weekend after her graduation, alone. Barbara, a bit uncertainly, does so, and is particularly impressed with the sermon, given by Dean Harcourt, the wheelchair-bound pastor. She feels compelled to meet with the Dean, and ends up discussing her fears that no one really knows her or likes her -- they are all friendly to her only because of her money. The Dean ends up suggesting that the money is a handicap, and that she head somewhere dressed unmodishly, find work, and see if she can make real friends. And Barbara decides to do so, and ends up at a department store, buying cheap clothes from a brassy young woman. Somehow they click, and when Barbara notes the other woman, Sally's, remarkable ability as a mimic, she suggests that Sally take her place doing summer stock in Provincetown. And indeed, so it goes -- Barbara heads west and ends up on a farm in Nebraska, and Sally goes to Provincetown where she is (rather implausibly) almost immediately discovered by a Hollywood agent and whisked off to make a film.

Suddenly the novel shifts gears, and we meet Lee Richardson, working at his Uncle's bank in Southern California. We gather immediately that he hates banking -- he wants to be an artist -- and he also hates his bossy Aunt's plans for his life, which include taking over the bank, and marrying the suitable yet boring young woman she has chosen for him. He is presented with an unexpected opportunity to escape when a flood washes out the bridge his car is crossing, and he barely survives. Letting his family assume he is dead, he takes another name and ends up in Chicago, learning to be an artist. But, somewhat discontented, he too ends up at Dean Harcourt's church -- and the Dean sends him to Barbara's farm in Nebraska, telling him to paint pictures of farm life. When he meets Barbara, we aren't surprised that sparks fly ...

And the novel moves on to Sally, in Hollywood, as she makes a successful film -- and also makes enemies with her selfish and spendthrift behavior. Sally too, it is clear, needs the Dean's help to set her moral life on a better path. But the Dean thinks Sally is Barbara's responsibility ... and this all ends up enmeshing Lee (now called Larry) in the whole thing. And the next chapter introduces yet another character -- Katherine, a regular attendee of the Dean's church, who is wasting her life by letting her family oppress her. In particular, when she meets a promising young man, her lazy but pretty sister immediately jumps in ... So the Dean involves her as well in the lives of Barbara and Lee/Larry and Sally ...

Well, the overall arc is fairly clear -- the Dean's ways will eventually set everyone's lives on better, Christian, paths. (His Christianity, I should note, is a very mainline Protestant, works-based, theologically thin, sort.) The Dean has assembled quite a stable of acolytes, people he has helped over the years, and Barbara, Lee, Sally, and Katherine are primed to join this stable.

It's all fairly obviously didactic and a bit moralistic; and fairly implausible in its working out. Even so, I enjoyed long stretches of it. The characters are certainly no more than two-dimensional, but their struggles do engage the readers' interest. The plot twists and turns may be sort of obvious, but they are still intriguing. The romance of Barbara and Lee/Larry is worth rooting for. Unfortunately, Douglas seemed to lose interest once he had the ending all arranged, and the book just kind of peters out in the last chapter. Certainly this is far from a great book -- and indeed it's easy to see why this was one of the few Douglas books not to become a major bestseller -- but it's tolerably entertaining for its relatively short length.
Posted by Rich Horton at 7:38 PM