Kristine Kathryn Rusch was born on June 4, 1960, making her (like one other recent Birthday Review subject here) just a few months younger than me. So I am reposting a review I wrote for my SFF.net newsgroup long ago one on of her Retrieval Artist books. 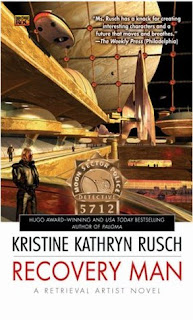 Recovery Man is the latest -- sixth novel (plus at least one shorter work) -- of Kristine Kathryn Rusch's long series of Retrieval Artist novels. These feature a Retrieval Artist named Miles Flint who works on the Moon. Humans are part of a loose alliance with various alien races. One agreement humans have signed on to as part of that alliance is that when in alien territory humans are subject to alien laws. The problem is, these laws can be absurdly draconian. Or, perhaps, appropriate to alien species, psychologies, and physiologies, but stupid when applied to humans. Much of the tension of the stories in the series comes from seeing humans subject to harsh and, by any reasonable (and human, but so what) evaluation, unfair punishment due to these alien laws. In response, many humans "Disappear" -- take on new identities. Retrieval Artists are the most overtly ethical of a variety of people who find those who have "Disappeared". In their case, these people are found for their own good -- perhaps they are no longer wanted by the aliens concerned, or perhaps they have come into a big inheritance or something.

These books have been slowly edging in the direction actively confronting this rather horrid situation. One of the problems I've had with past books is that there has not been enough acknowledgement that these rules are a problem. Another is that the books mostly display (not unreasonably) the most ridiculous alien laws -- presumably in many cases humans who violate alien laws are guilty and deserve punishment -- and the punishment they get is appropriate. But as displayed in the books, the aliens collectively are batshit crazy, and the proper response of humanity would be to have nothing to do with them. To be fair, this can be seen as a response to seeing a Retrieval Artist's cases -- which might naturally gravitate towards the (presumably few) extreme situations.

(My other problems with the series' underpinnings are twofold. Economics, for one: I can't make myself believe that the Retrieval Artist business would be quite as thriving and lucrative as portrayed. Science, for two: the details of such things as solar system travel are not well-handled -- jaunts to the outer planets are about as hard as getting in your car and travelling to Florida from St. Louis.)

As hinted above, I have had issues with most of the previous books in the series. But I keep reading. Why? Well, Rusch is an engaging writer -- the books are fast and involving reads. Miles Flint and the various other characters we meet (notably Lunar security chief Noelle De Ricci and ambitious and ethically challenged newswoman Ki Bowles) are fairly interesting to follow.

Recovery Man is a bit different from the earlier volumes. For one things, it is not primarily set on the Moon. For another thing, Noelle De Ricci and Ki Bowles are for the most part absent -- this book focuses on Miles, and on a couple of new characters. These are Rhonda Shindo and her 13 year old daughter Talia. They live on Jupiter's moon Callisto. Rhonda is kidnapped by a "recovery man", while Talia is left locked in their house. It appears that Rhonda is wanted by an alien species, the Gyonnese, for a heinous crime. The thing is, they don't really want Rhonda -- they want her child. But, the Gyonnese being aliens, not just any old child will do. It has to be a "real" child -- and Talia, we learn, is a clone. The Gyonnese believe that Rhonda has hidden her real child, and that clones like Talia are a diversion tactic. So "recovery man" (a sort of unethical inverse retrieval artist) is bringing her to the Gyonnese, who hope to learn from her the location of her real child.

Meanwhile, back on the Moon, Miles Flint is learning some disturbing secrets about his own past: secrets hidden in the files of his mentor Paloma. We already knew that Miles' career as a Retrieval Artist, and before that a policeman, is in part a reaction to the death of his young daughter due to the negligence of a day care worker. We also know that the stress of this loss broke up his marriage. Well, his wife's name was -- Rhonda. Indeed, she is Rhonda Shindo, and begins to seem that there is a mystery about their daughter's death ... perhaps tied to Rhonda's past, especially to her dealings with the Gyonnese.

So the three strands followed involve Rhonda's struggles with her kidnappers; Talia's difficulties after being abandoned in a company town, and her taking control of her own life and legal case; and Miles's search for better understanding of Rhonda and their child. The central mystery, really, is "What did Rhonda Shindo do?" But this book turns out to be more of an adventure, less of a straight mystery. And it certainly leads us in the direction of greater understanding of Miles's past, and also greater understanding of the tangled mess humans and aliens have mutually made of their relations. As such, it's a pretty positive development in this series of books. I rather enjoyed it, on the whole.
Posted by Rich Horton at 6:49 PM