A Forgotten SF Novel: The Duplicated Man, by James Blish and Robert Lowndes

A Forgotten SF Novel: The Duplicated Man, by James Blish and Robert Lowndes 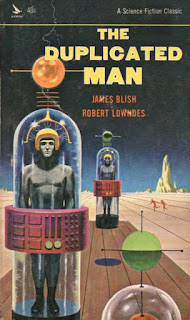 I've written about both Blish and Lowndes before, but I am trying to finish the few Blish novels I hadn't previously read, so I picked up this slim book in its Airmont paperback edition. Airmont was the paperback arm of the low end publisher Thomas Bouregy, and this novel first appeared in hardcovers from Bouregy. It should be noted that Robert Lowndes was an editor for Thomas Bouregy/Airmont. It should also be noted that Robert Lowndes was the editor of Dynamic Science Fiction, where The Duplicated Man first appeared, in the August 1953 issue (as by Blish and "Michael Sherman".) That version was very likely the full text of the eventual book version.

I'll skip the details about the two authors -- in short, Blish is one of the field's true greats, as an author and a critic, primarily. Lowndes is a significant figure as well, primarily as an editor for Columbia Publications, and other outlets, where he always has a minimal budget and produced magazines that were better than one had any right to expect.

Blish, it should be added, was one of those writers (Michael Moorcock is another) who was truly brilliant when in top form, and who could be just awful when the material didn't engage him. And, it's sad to say, The Duplicated Man is an instance of the latter situation. 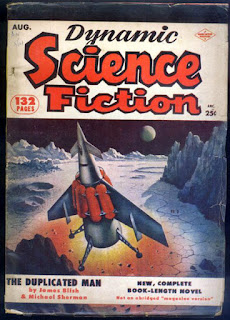 The Duplicated Man is set a few centuries in the future. Earth is under a world government of sorts, ruled by the Security Council, which was formed to prevent war. Alas, while Earth is at peace, the threat of attack from the colonists of Venus remains -- a group apparently expelled from Earth a long time before, now confined in difficult conditions on hostile Venus. They are protected from attack by an electronic screen, but they occasionally send missiles to bombard Earth.

There are parties on both planets, minority parties, favoring rapprochement with the other. Paul Danton is a functionary in the Pro-Earth Party, the group on Earth urging treaty with the Venusians. He finds himself entangled in the Byzantine politics of his party, where everyone seems poised to betray everyone else. But soon Danton is approached by the rulers of Earth, who have a use for him -- it seems he bears an uncanny resemblance to one of the key men on Venus.

We get an extended look at the Venusian ruling structure: at the top is Geoffrey Thomas, one of the original exiles to Venus, who has become immortal, at a terrible price. His deputies, particularly the devious woman Luisa, are scheming to become his successor, and to learn his secret of immortality. But he has his own plans.

Back on Earth, Danton meets Earth's rulers, and falls desperately in love with one of the women in that group, Marcia Nels. And he agrees to their plan -- to use a secret and almost lost technology of duplication, which will created multiple copies of him, to send to Venus to sow confusion. But it turns out this duplication technology is decidedly imperfect (for somewhat interesting reasons, if they had been better developed).

The novel meanders along -- hard to meander, you would think, in 128 pages -- with lots of hard to follow scheming among the governments of both planets; and an abortive war, with a fair amount of death; and, more interestingly, a kind of total mess surrounding the "duplicated man" plot, ending, a bit unconvincingly, with the revelation that the whole thing was planned by the leader of both planets with the best interests of everyone in mind. Hmmph.

There are a couple of grace notes that scream "Blish", such as the mention of Finnegans Wake (as a set text in schools, of all things!), and the mention of Spengler as well. And there are a fair number of kind of neat ideas buried in the overall tedium. Still and all, a pretty weak novel in the Blish oeuvre.