Kay Boyle is an interesting case. She was born in Minnesota in 1902, and died in 1992, having lived all over the place, including a lot of time in France. She was married three times, took numerous lovers, had six children (three out of wedlock). She was for a time married to Baron Franckenstein, though no mention is made of the monster. She was blacklisted in the 1950s, and was an opponent of S. I. Hayakawa when he was president of San Francisco State College, where Boyle was a professor.

Boyle was a rather highly regarded poet and short story writer, especially in the '30s, when she also published some fairly well-regarded novels. The standard narrative seems to be that she more or less lost it after that, especially in her novels. One reason for this was Edmund Wilson's vicious review of the novel at hand, Avalanche. I will confess that I think very little of Wilson (perhaps unfairly), and the notion that he hated a work has a tendency to predispose me to like it. That said, he was partly right about Avalanche -- it's clearly a work of popular fiction, with the occasional nod to cliche in the plot and characters, and with a certain wish-fulfillment aspect to things. On the other hand, it seems much better written than the run of romantic thrillers -- so, perhaps a disappointment to Wilson if he was looking for a novel of the ambition of her earlier works, but a good work of its kind. 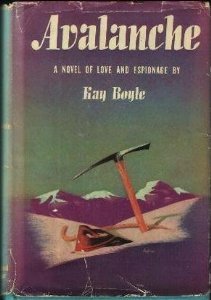 Avalanche was published early in 1944, and it is set in late 1942. It's a war novel, about the French Resistance, and so published in an extremely timely fashion. To an extent it can be regarded -- a bit like, say, Casablanca -- as propaganda, which of course is not necessarily good for art. It wasn't really a bestseller, I should add.

Fenton Ravel is a 21-year old woman who grew up in Truex, a mountain town in the French Alps, on the border with Italy. Her father is French, but her mother is American, and she was taken to the US as the war started, for safety. Now it is 1942, the US has joined the war, and Fenton is of age, so she has come back to Vichy France to help with relief efforts in Lyon. With a week or so off, she takes the train to her home town, hoping to see the man she was in love with, one Bastineau. On the train she encounters two other men -- de Vaudoix, a sinister man who claims to be a Swiss watch merchant, but who we all gather is a German agent, and Jacqueminot, another man from Truex.

Once in Truex, Fenton hears the news that Bastineau has been killed in an avalanche, along with a Swiss tourist. De Vaudoix reveals that his task it to recover the body of the Swiss man who was killed. Fenton is subject to a certain amount of suspicion, partly because she left them to their own devices just as the war started (though she had no choice in the matter) and partly because some suspect she might be helping de Vaudoix. But the peasants still trust her, as well as the older couple called Cousin Perrin and La Cousine. Fenton begins to get hints of some Resistance activity going on, presented to her as smuggling goods. Bastineau was clearly involved, and soon there are hints that he did not in fact die. But then one of the local girls, who has been snubbing her, makes a point of telling Fenton that she and Bastineau are engaged.

Fenton has agreed to help La Cousine -- she assumes with Resistance work -- and she also is inveigled into accompanying de Vaudoix on his expedition up the ice. Further twists and turns follow -- Bastineau dies again -- de Vaudoix leaves (supposedly) -- Fenton travels up the mountain again ... The ending is exciting and quite moving and inspirational. It's also -- sure! -- somewhat implausible. There's no doubt that it's popular fiction, and as I said aimed in part at promoting the side of the good guys in the war. So be it -- it's enjoyable (and really pretty well written) popular fiction.