Don Webb was born on April 30, 1960 (which makes him younger than me! Sigh). He is a prolific writer of intriguing stories, often with a horror cast. He has written three novels, ostensibly mysteries but with weird aspects, for sure, all of which I enjoyed -- but also, none in over fifteen years. But in honor of his birthday, I thought to repost this review I did of Essential Saltes, his seond novel. The first was The Double, the third Endless Honeymoon. 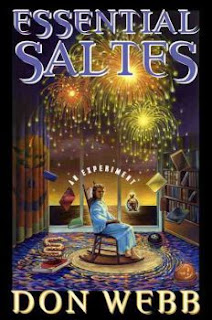 Essential Saltes seems to be marketed as a mystery, and indeed it is one. It’s also arguably speculative fiction, though it’s open to multiple readings. But it’s definitely good, and filled with outrageous content that ought to satisfy our desire for the strange.

Don Webb has published boatloads of short stories. As a writer, he is weird, often funny, often strange, always interesting, and Texan. As a book, Essential Saltes is all of those things.

The protagonist is Matthew Reynman, a used-book dealer in Austin. His wife was murdered two years prior to the action, and now her ashes have been stolen. Matthew had promised to keep them and arrange for his and her ashes to be mixed and shot off in fireworks after his death. This really annoys him, and, much worse, his wife’s murderer has been released from prison in a bureaucratic snafu. Matthew tries to find the thief of his wife’s remains, and at the same time avoid being killed by his wife’s murderer.

The story involves many very odd characters, and a mix of subjects that in its eclecticness reminds me of Robertson Davies (though it’s not a very Davies-like book): fireworks, sex, race, alchemy, used books, codes and code-breaking, mental illness, polyamory, and more. There are also some tantalizing hints of a story involving Matthew’s brother John, which is the subject of Webb’s first novel, The Double, also recommended. Essential Saltes is continually interesting just for the strange characters, the odd subject matter, and the well-described sex. The plot is full of action, but at times a bit discursive, and almost too strange for me. That is, the motivations of the very strange individuals involved were perhaps a bit too odd to always hold my interest. But the rest of the book was strong enough to keep me going, and I enjoyed it quite a bit. Definitely worth reading.
Posted by Rich Horton at 6:01 PM