I have enjoyed a number of Regency Romances over the years, particularly those by Georgette Heyer, but any skilled and witty writer can make these plenty of fun. And of course I'm a big fan of science fiction, so when I ran across Current Confusion at a library book sale extra cheap, and when I noticed it was a Regency with an SF aspect, I figured it would be worth a try.

"Kitty Grey" is stated on the jacket copy to be a "pen-name of a long-time editor", and a bit of sleuthing by Denny Lien revealed her to be Mary Elizabeth Allen, who was indeed an editor at Walker, publishers of this book (and many Regency romances). "Kitty Grey" has one more credit, as writer of a set of stories that seem to be a sort of frame for an anthology called A Regency Valentine, and Mary Elizabeth Allen was the editor of another romance anthology with a fantasy twist, All Hallow's Eve, which featured stories by Andre Norton, Morgan Llywellen, Jo Beverly, and Carola Dunn. 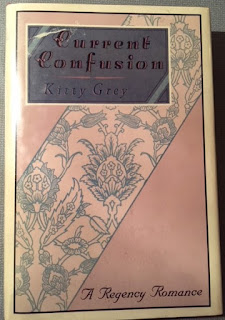 Alas, Current Confusion isn't really very good, either as SF or as romance. It is real SF, I will say -- it's a timeslip romance, but more than that, it makes real use of the time travel, and include a bit of play with paradoxes, and time travel in both directions, as well as scientific speculation.

Cassandra Brown is a young physicist working on a "4-D accelerator" at a lab in London, when there is an explosion, and all of a sudden the lab looks very different, and there's a strangely dressed man. Of course, no surprise, she's in 1815, at Font Hall, the seat of Harry, Lord Font. Harry is an experimenter himself, and somehow Cassandra's experiment interacted with Harry's fooling with electricity, and she ended up back in time.

She convinces Harry of what happened, and he begins to help her with the math needed to figure out a way back to her time. But complications arise when Harry has to go to London to visit his widowed sister. Cassandra accompanies him, and deals with things like the assumptions immediately made about her virtue, and her difficulty understanding Regency manners, etc. Harry's sister is still mourning her young husband's death, but Cassandra becomes convinced Harry really wants to marry her, while Harry is trying to set her up with a friend of his. And even worse, there's Harry's slimy cousin Arthur, who inherits his title if both Harry and his young nephew are out of the way. But when the nephew is nearly murdered, somehow Cassandra falls under suspicion ... but luckily she and Harry have figured out the way for her to get back to our time.

Once back there, though, she learns what really happened to the Font family ... and she can't allow that -- so she decides to return again ... and everything devolves into utter silliness, really, though it was already well on the way.

The novel fails as a romance mainly because there are no real sparks between the main characters. It gives a brave try on the SF side, but that doesn't work well either. The writing is indifferent, the plot logic often silly, and Cassandra is a very unconvincing character. Just not a very good novel.
Posted by Rich Horton at 7:32 PM