It's been a while since I published a review of an Old Bestseller of the sort that I feel is the core mission of this blog: forgotten popular fiction from the first half of the 20th Century. But here's a very good example of that sort of thing. And it's published on an auspicious day! (No, not Pearl Harbor Day. Instead, the 68th anniversary of the author's death!)

Rex Beach (1877-1949) was born in Michigan, raised in Florida, and went to law school in Chicago. He prospected for gold in Alaska (unsuccessfully), and he won a silver medal as part of the US Water Polo team in the 1904 Olympics in St. Louis. He turned to writing about this time, and his second novel, The Spoilers (1906) was the 8th bestselling novel of that year (according to Publishers' Weekly). He had the second, third and eighth bestselling novels of 1908. 1909, and 1912 as well. The Spoilers (based on his experiences in Alaska, and on a true incident of corruption) was made into a movie at least 5 times, once starring Gary Cooper, another time John Wayne.

Beach's novels were generally adventure novels, of the "he man" school of literature, often set on the frontier. In this context, The Auction Block (1914) is an outlier: it is to an extent (if not all that successfully) a "social" novel, it is set in New York society (and the demimonde), it is a love story, and it features relatively little action (though there is some gunplay, fast cars, and fights, just not a whole lot).

My copy appears to be the First Edition, from Harper and Brothers (in fair condition, no dj). It is copiously, and quite nicely, illustrated by the famous illustrator Charles Dana Gibson (of the "Gibson Girl"). 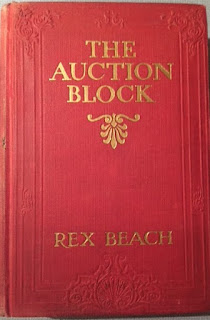 It opens with the Knight family, from Upstate New York, in some trouble. Their father, Peter, a very weak man, had lost his bid for re-election as Sheriff, due to his corrupt actions. The son, Jim, is lazy and morally degenerate. They are to move to New York City, where a political mentor of Mr. Knight has found him a patronage job. But, led by Mrs. Knight and Jim, they hatch a plan for greater riches, unbeknownst (mostly) to the daughter, Lorelei, who is beautiful and innocent and morally upstanding. This plan is to have Lorelei go on the musical stage and lure a rich man into marriage.

Lorelei agrees to the stage part of things, to help support the family, which becomes particularly important after Peter has an accident and loses his job. Lorelei is quite a hit from the start, because of her beauty, though she is a mediocre singer and actress. She soon learns that a big part of the job is to "entertain" the rich men who come to see her. She maintains her moral standards to a degree: she eats with the men and goes to parties, but doesn't drink, nor does she allow the men further liberties (though that would be more lucrative). 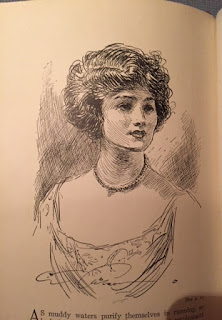 She impresses a cynical critic, Campbell Pope, with her freshness, and she becomes a friend to a dyspeptic middle-aged banker, Mr. Merkle, who gives her plenty of advice about steering away from the worst elements of her milieu. Her dressing room mate is Lilas Lynn, a somewhat coarser character who has become the mistress of a married steel magnate, Jarvis Hammon. Lorelei also makes a surprising friend: the notorious Adoree Demorest, regarded as the wickedest actress on Broadway. About this time, Bob Wharton, the dissipated son of another steel man, Hannibal Wharton of Pittsburg (as it seemed to be spelled often those days), falls head over heels for Lorelei, but she rejects his advances.

Lilas has plans to to trap Hammon into marriage. (Part of her motivation is revenge: she is the daughter of a steelworker who died in an accident in one of Hammon's plants.) To do so she needs to cause a scandal, and unfortunately her machinations enmesh Lorelei and Mr. Merkle, who are together only because he was rescuing her from Bob Wharton's importunings. Jim Knight, now a small time gangster, is involved as well. Before long Lilas's plans are coming to fruition; and in addition, Lorelei's nasty family is trying to blackmail Mr. Merkle. But Jarvis Hammon and Lilas Lynn have a shocking falling out, which leads to Lilas killing Hammon (in self-defense, to be fair), and Bob Wharton and Mr. Merkle help the dying Hammon hush up the scandalous aspects.

Desperate for money, the Knights scheme to trick Bob Wharton into asking Lorelei to marry him. She is completely against this, but her vile brother tricks her into an ambiguous situation, and Lorelei, not feeling well anyway after witnessing Hammon's murder, against her better instincts accepts a drunken proposal from Bob.

The marriage (due to brother Jim's plotting) happens immediately, and the Knights begin to work on Hannibal Wharton for a payoff in exchange for a divorce. But Lorelei will have none of it. She tells Bob that he can have the divorce no strings attached -- but he begs her to stick with him: he truly believes he loves her. She agrees on one condition: that he quit drinking.

The rest of the novel concerns Bob's fitful efforts at reform, with plenty of backsliding. He is pushed to get a job, and after his father (who has cut him off without a penny) blacklists him from any job with his associates, Bob has to come up with something on his own. He has surprising success, but every step forward is the occasion for a disastrous step backward, usually due to falling spectacularly off the wagon. Things come to a terrible head when they attend a country house party, and Lorelei is disgusted by the immorality of the "Society" folks on hand, especially when one man attempts to rape her. She is ready to break off with Bob completely (he was drunk and thus unable to protect Lorelei), but then she learns she is pregnant.

It's easy to see the resolution: the child helps Bob to truly face his responsibilities, and also eventually melts the hearts of Bob's parents. There is still the Knight family to deal with: they are still trying to extort money from Hannibal Wharton. And there is another crisis when Lilas Lynn, now a desperate cocaine addict, returns and tries to cause more chaos. Not to mention Jim Knight's mob connections ... But there are plenty of dei ex machinae to go around and solve all these problems. And there's a sweet if silly subplot involving Adoree Demorest and the cynical critic Campbell Pope.

It's really not a very good novel. Its attempts at social relevance: dealing with the problems of steelworkers, police corruption and mob violence, drug addiction, alcoholism, and the abuse of the showgirls working on Broadway, are decidedly clumsy if somewhat well-meant. It has all too typical racist bits, and especially anti-Semitic aspects (Lilas Lynn, the villainess, is Jewish, and described in quite absurd terms). The working out of the plot is terribly convenient.

And for all that, I kind of enjoyed it, and was even rather moved at the conclusion. As with so many of these Old Bestsellers, it's really not a mystery that it sold well -- even though I really see no great reason for a revival.