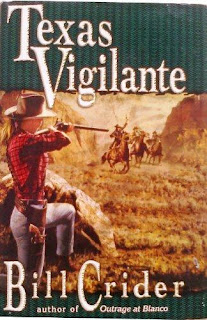 Bill Crider (b. 1941) is best known to me as a serious book collector with great knowledge in genres close to me -- pulps and mystery primarily, but also some interest in SF and Fantasy. He was a long time English professor. He is a life-long Texan. And he also has written a great many novels, mostly in the mystery/crime genre. He has won two Anthony awards, and been nominated for several Edgars, for his mystery fiction.

I had known Bill on a mailing list for some years, but I met him first just a few weeks ago at the World Fantasy Convention in San Antonio (not far from where Bill was born). We spoke only briefly. And just recently I heard that Bill has gone into hospice. It was clearly time for me to remedy a longstanding lacuna in my reading, and get to one of his books. (Bill was also a regular contributor to Patti Abbott's Friday's Forgotten Books.) 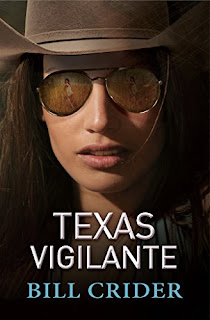 I chose Texas Vigilante, the second of his novels about Ellie Taine. Both books were published by Dell in 1999. The first of these is Outrage at Blanco, in which, I deduce from Texas Vigilante, Ellie is raped, and her husband murdered, after which she chases down the perpetrators and kills a couple of them. Texas Vigilante is set a year or so later. (Some time in the past, it seems, based on the lack of automobiles, which makes the ebook cover picture to the right not very accurate.) Ellie has inherited a ranch in Blanco, TX, from her friend Jonathan Crossland, and she is running it with the help of Lane Tolbert, his wife Sue and their young daughter Laurie. Meantime, Sue's brother, Angel Ware, is in prison. He's guilty of a whole raft of crimes (including burning down his parents' house with them in it) -- he's a pure sociopath. The prison guard is a sociopath himself, fond of torturing Angel for no apparent reason, and one day Angel takes the opportunity to escape while on a work detail. He is accompanied by another sociopath, the teenaged Hoot Riley (who seems a bit too interested in girls even younger then he is), as well as a professional criminal (Abilene Jack Sturdivant) and an unfortunate loser (Ben Jephson). Angel is the brains of the outfit, so they stick with him, even as his obsession to find his sister and her family seems dangerous.

Lane's brother Brady is a Texas Ranger, the one who actually arrested Angel, though Sue had turned him in. Obviously, Angel wants revenge on Sue and on Brady. The story then follows Angel's path to finding Sue; Brady's attempts to track down the escapees, and Ellie and her fellow ranchers as they worry about the danger posed by Angel. There are a variety of viewpoint characters, noticeably including a couple of less influential figures: Ben Jephson, the hapless prisoner dragged along on Angel's quest; and Shag Tillman, a lazy and cowardly but generally good-hearted Sheriff at Blanco.

The story is crisply told and fast-moving. There is a fair amount of mordant humor; and a lot of glimpses on the mental processes of some evil people, as well as some good people. Angel's plan is to kidnap Laurie -- who actually seems to like Angel, and seems to be one of the few people Angel has any concern for. That goes smoothly enough, followed by an obvious attempt to lure Brady and Lane Tolbert into an ambush. He doesn't count on Ellie Taine, however ... Nor, perhaps, on the unreliability of his fellow criminals. Nor on the Texas rain.

The book delivers on what it promised -- lots of action (and violence), lots of tension, really bad guys and competent good guys. It's a fun read (for values of fun that included spending a lot of time with some nasty people). It is, as I mentioned, the second book about Ellie Taine -- as far as I can tell, however, it was also the last, which is a shame. It seems at least one more book was potentially in the offing -- though the thought of another horrifying crime perpetrated against those close to her is a bit hard to take!

It's a shame we won't have Bill Crider -- and his writing and his knowledge -- for much longer, but I am glad I had the chance to meet him once, and to know him online for longer.
Posted by Rich Horton at 7:47 PM