A Perhaps not Forgotten AH Mystery: Point of Honour, by Madeleine E. Robins

A Perhaps not Forgotten AH Mystery: Point of Honour, by Madeleine E. Robins

I had planned to review a 1905 novel this week -- it's been a while since I covered a true Old Bestseller -- but the exigencies of the Christmas season intervened: Christmas itself, plus things like finally buying a new sofa, not to mention the end of the year deadlines for the Best of the Year book and for Locus. So I didn't finish the book. That leaves me an opportunity to cover a book I really liked when it came out in 2003. This review was first published at SF Site.

Madeleine Robins wrote several straight Regency novels between 1977 and 1985. She has also published a number of enjoyable stories in SF and Fantasy markets, and a couple of Fantasy novels, perhaps most notably The Stone War. Her most recent novel, from 2013, is an Historical novel, set in 13th Century Italy: Sold for Endless Rue, which looks like, from one angle, a Rapunzel retelling.

I have enjoyed many of her short stories over time, but my favorites among her work are the two Sarah Tolerance novels, Point of Honour from 2003 and Petty Treason from 2005. I only recently learned that she finally was able to publish a third: The Sleeping Partner, from the independent house Plus One, in 2011. That's good news, as I had really regretted that the series hadn't continued. These books are mysteries set in a somewhat alternate history Regency.

(I will include a link to Robins' page which itself includes links from which you can buy all the books.)

Here's my original review of the first volume: 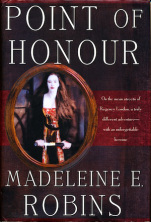 The time is 1810. The Queen Regent is clinging to life while her children, the ineligibly married Prince of Wales and the scandalous Duke of Clarence scramble for position in the event of her death. Sarah Tolerance is a Fallen Woman -- when a teen she fell in love with her brother's fencing instructor and ran away to the Continent. But her lover has died, and she has returned to England. Her reputation is ruined, her father has repudiated her, she is an ancient 28 years old. What can she do? She is taken in by her Aunt, another Fallen Woman, who runs a very successful house of prostitution. But Sarah has no interest in being a whore, so instead she sets up as what we would call a Private Investigator, often turning up evidence for Society women of their husbands' infidelity.

Sarah receives a new commission from a certain Lord Trux, asking that she retrieve an Italian fan, that may be in the possession of a retired whore named Deb Cunning. Trux's unnamed boss is willing to offer quite a bit more than the fan is worth for its retrieval. Sarah's job is complicated by the fact that retired whores generally change their names, and that nobody is sure where Deb Cunning has retired to. But Sarah starts sifting through known haunts of older prostitutes, soon finding some interesting leads. However, her job is quickly complicated, as it soon seems that this fan is of considerable interest to both sides in the current political wrangle. Worse, a couple of people involved in the search turn up dead -- one is a close friend of Sarah's, the other is a woman she has visited to ask for information -- her visit timed to make her a suspect in the murder.

Sarah finally learns who her real client is -- the handsome, youngish, Earl of Versellion, who is in line to be Prime Minister if the new Regent chooses to back a Whig government. Sarah finds herself greatly attracted to Versellion, all the while exasperated by the paucity of information on the importance of the fan. This attraction deepens when she and Versellion have to go on the run in rural England, apparently under threat of murder by his Tory rivals -- or by who?

The novel nicely intertwines political intrigue, an interesting mystery about the real nature of the hidden fan (with a guessable but satisfying solution), romance, action, and a nice ending with an extra twist or two. Sarah herself is an interesting heroine, and I'm glad to know that at least two further novels are planned. [As noted above, only one more came out from the original publisher, but the third appeared in 2011.]

The SFnal elements, as mentioned, are contained in the AH nature of the setting. Many people will have immediately gathered that there was never a Queen Regent in 1810. Robins has altered English history just slightly, presumably for two reasons. One, it allows her to get away with a somewhat implausible position for her heroine: one presumes that the Queen Regent's influence, and other modest social changes, have allowed women in this 1810 just a bit more freedom (but not a whole lot!) than they had in our timeline. Two, it allows her to suggest ahistorical political intrigues as plausible, unpredictable in outcome, plot elements. (And there is a slightly more SFnal aspect to her AH: she has a minor character be part of a group of scientists who seem to be anticipating Mendelian genetics by several decades -- with a bit of actual plot relevance, even!)

Still, the main appeal is likely to mystery readers first: particularly those who enjoyed the late Kate Ross's Julian Kestrel stories, or those who enjoy Anne Perry's Victorian mysteries. Secondarily, readers of Regency romances may enjoy the book, though it does not follow standard Regency plot conventions, it does have a nice romance at its core. SF readers will like the book not as much for the relatively minor SF aspects, but for its real virtue: it's a fine historical mystery story. Or, if you will, as Robins has described it, a "hardboiled Regency".
Posted by Rich Horton at 5:14 PM