I don't have a forgotten best seller or an Ace Double to write about this week (I spent the past 10 days in Mesa, AZ, on business, and the reading I did was mostly focussed on end of the year short fiction catchup). So I'm turning to a post about one of the great SF writers of her time -- and a long time it has been. I first wrote this for SF Site almost 15 years ago, in 2003.

Carol Emswhiller was born in 1921 in Ann Arbor, MI. Her father was a Professor of English and Linguistics (at, of course, the University of Michigan). She herself took degrees in Music and in Design, and was a Fulbright Fellow in France. She spent a good deal of time in France while growing up as well. She married Ed Emshwiller, the brilliant SF illustrator and experimental filmmaker, in 1949. (Many of the women featured in Ed Emshwiller's illustrations bear a certain resemblance to Carol.)

The review below is from 2003, as I've noted. Since that time she continued publishing exceptional short fiction until about 2012, and two more novels (Mister Boots in 2005 and The Secret City in 2007). I understand that she has ceased writing, due to her health (eyesight, perhaps?)

Carol Emshwiller's first SF short story was published in 1955 in Future Science Fiction. (Two earlier stories appeared in other genres: a crime fiction 'zine and a contemporary fiction magazine. (Thanks to Todd Mason for the information.)) Her early work was published mostly in Robert Lowndes's magazines (Future and Science Fiction Quarterly, as well as some crime magazines) and in F&SF. She continued to publish short fiction through the 50s and 60s, achieving at least some notice with stories like "Hunting Machine" (1957), "Pelt" (1958), "Day at the Beach" (1959), and "Chicken Icarus" (1966), each of which was chosen for a Best of the Year anthology.

Much of this early work was clever but light, as with that first story, "This Thing Called Love", a 50s social satire in the mode pioneered at H. L. Gold's Galaxy. The narrator's husband wants to emigrate to the stars, but she refuses to accompany him: why should she abandon her crushes on the robots who star in TV shows, and who could love a real human anyway? Her slightly later story, "Idol's Eye" (Future, February 1958), is perhaps more characteristic of her later work. An apparently ugly, near-blind, young farm woman is being crudely courted by a brutish neighbor, but she discovers a special "sight", that makes her the appropriate consort for a mysterious man brought by aliens.

In the mid-60s, Emshwiller's work became odder, deeper, more experimental. Many of these stories were collected in the 1974 book Joy In Our Cause, including "Sex and/or Mr. Morrison", one of the creepiest and most memorable stories in Harlan Ellison's landmark anthology Dangerous Visions. There followed two more collections, Verging on the Pertinent (1989) and The Start of the End of It All (1991), the strange feminist fantasy Carmen Dog (1988), and two novels set in the American West, Ledoyt (1995) and Leaping Man Hill (1999).

In 1999, her stories began appearing again in F&SF, and she has published a generous helping of new fiction in the past few years, in F&SF, at SCI FICTION, and in anthologies such as Leviathan Three and The Green Man. [As noted, she continued publishing short fiction in the following years through 2012, much of it in Asimov's.] And here are two new books: a story collection, and a novel, both published by Gavin Grant and Kelly Link's worthy effort, Small Beer Press. 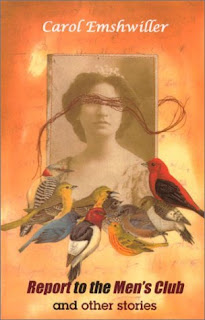 Report to the Men's Club and Other Stories includes 19 pieces, seven of them new to this book. The reprints include seven from her recent in-genre outburst, with the other stories dating as far back as 1977. Throughout Emshwiller's lovely wry voice is evident, as are her quirky imagination, her warm regard for her characters: women, men, and other creatures, and her passionate interest in the relationship between the sexes.

Several of the stories reflect her interest in the Western landscape. (Emshwiller lives part of the year in a remote Western area.) Often these stories feature independent women coming to cautious accommodations with similarly independent, often mostly silent, men. The settings may or may not be the actual American West. (I have not yet read her Western novels, but I gather that this might describe these novels as well.) Thus vaguely SFnal stories like "Water Master", about the man who controls the allocation of water to a generally dry village, and the woman who becomes fascinated with him. Thus also "The Paganini of Jacob's Gulch", about a lame violinist from Scotland who moves to the American West and gets beat up for playing too well. And "Desert Child", about an old woman, an old man, and a near-feral child who end up together.

Emshwiller's range is wide, though. "Acceptance Speech" is one of the strangest and most SFnal of her recent stories, about a human kidnapped by aliens to write poetry. "Foster Mother" and "Creature" are related stories about a genetically engineered war-fighting monster who is also a child in need of love. The longest story here is "Venus Rising", originally published as a chapbook in 1992. It tells in Emshwiller's oblique, submerged, way of intelligent water creatures and their reaction to the arrival of a castaway, apparently a man, in their midst.

Other delights include "Prejudice and Pride", a striking and moving meditation on the sexual life of Elizabeth Bennett and Fitzwilliam Darcy; two stories about yetis and other mysterious creatures: "Abominable" and "Overlooking"; and "Grandma", a look at a female superhero in her old age. This is a wonderful collection of short fiction, marked by tremendous variety, a wonderful, funny, knowing, and sympathetic voice, and a truly off-center imagination. 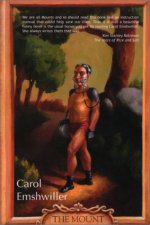 Emshwiller's new novel is The Mount, and unlike any of her previous novels it is fairly straightforward science fiction. In simplest terms, it tells of a revolution against alien invaders. These invaders, called "Hoots", are physically weak and small, but over generations they have bred humans to serve them as "Mounts". The humans, then, become essentially pets to the aliens, treated a great deal like horses are treated by present-day humans. Thus the novel explores, quite thoughtfully, human/pet relationships, master/slave relationships, and the question of freedom versus comfort.

There are a few different viewpoint characters, but the story is mainly told through the eye of Charley, an especially prized young Mount who is the property of the son of a very high-ranking Hoot. Charley is extremely proud, to the point of vanity, of his abilities as a Mount. And his relationship with his Hoot, who he calls "Little Master", is complex but largely loving. Loving, though, in an almost creepy Master-Slave fashion. Charley, it turns out, is the son of a rebellious human, who has gone off to live in the wilderness, and who plots to free all humans, but particularly his son. The novel's main action turns on the initial success of this scheme, and then on the ambiguous results. Charley is by no means sure that freedom is all it's cracked up to be, and moreover he misses his "Little Master". He's also jealous of his father's relationship with a woman not his mother -- his mother, of course, being basically a brood mare chosen by the Hoots.

The plot twists a couple of times from there, coming to a moving, thoughtful, and balanced resolution, if not exactly a terribly original one. The storytelling is clear and interesting. The age of the protagonist, the theme, and the relatively simple storytelling make this novel, I would think, appealing to younger readers, but it certainly will satisfy adults as well.

Carol Emshwiller is a real treasure. She still seems underappreciated to me, but this late burst of productivity may help remedy that situation. Both The Mount and Report to the Men's Club are first rate books. I think I'd choose the story collection as the better book, for its range, complexity, and wit. But either way, I'm thrilled to see these books, and I look forward to many more stories from this writer. [And, as noted, we got many more stories, and two more novels, through 2012.]
Posted by Rich Horton at 5:41 PM