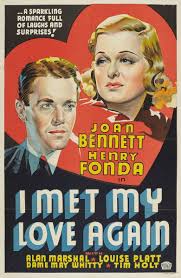 This was not a major bestseller, but one of a number of novels -- at least 15 -- by a writer who seemed a fairly successful producer of reasonably sophisticated romance novels between about 1930 and the early '60s. Allene Corliss was born Senath Allene Soule in Vermont in 1899 (though some sources say 1898), and seems to have lived there her whole life. She married Bruce Corliss, a businessman originally from Kansas, and they had three children (her daughter Jane died as recently as 2016, still in Vermont). She published regularly in magazines such as the American Magazine and Women's Home Companion. Her 1936 novel Summer Lightning became a movie in 1938: I Met My Love Again, starring Joan Bennet and Henry Fonda. (Despite that star power, it does not seem to have been a success.) She died in 1979.

She is all but forgotten now, but I found a few contemporary reviews from Kirkus, and they were generally positive, if in a slightly condescending way: "Ardent, amatory amusement in the best manner", "A complex plot fairly well manoeuvred, with facile dialogue of the smart type. Allene Corliss is building a good rental library following, of the Faith Baldwin type of reader. This won't disappoint them.", "Allene Corliss has a facile style and a pleasant gift of story telling. She's not important, but she is a safe circulating library bet for women readers." Condescending those may be, but they are probably pretty much correct. 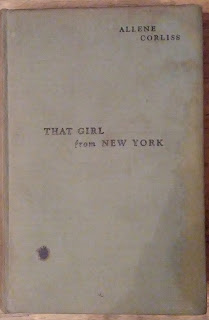 That Girl From New York was her second novel, after Marry for Love. It was published in 1932 by Farrar and Rinehart. My edition is the A. L. Burt reprint. I believe it was published in the UK under the title Eden. The novel opens in New York, as Jerry Evans meets Eden Lane at a slow party. Jerry is from Vermont, the son of a banker, and he is working at a bank in New York. Eden is in advertising. The two are quickly in love, Eden more desperately so, despite that she is the stronger character: extremely beautiful, more intelligent than Jerry, more honest and straightforward. This section comes off a bit flat -- there is little tension. Eden does have a friend, Jake, with whom she had been involved a few years previously. He's still in love with her, but he has married unhappily, and now his wife is dying. Eden had one previous indiscretion, with, coincidentally, a college roommate of Jerry's. All this, though is setup.

For, it turns out, Jerry's mother is a rather evil woman, and she has plans for Jerry. She is quite upset at his quick marriage to Eden -- she senses that Eden could remove Jerry from her influence. She wanted him to marry a local girl, Elizabeth, who is plain and a bit dull, and who is desperately in love with him. So she arranges for Jerry to be fired (her husband is dead and she controls the local bank, and so she has a relationship with Jerry's boss). Jerry and Eden have been spending a bit beyond their means (mostly Jerry's fault), and Jerry does not want to live on his wife's earnings. So they are forced to move to Vermont, and to Jerry's rather ugly childhood home.

Jerry takes a position at his mother's bank, but she doesn't pay him a salary, to prevent him moving out. She is coldly vile to Eden, objecting to her smoking, her makeup, and any attempts by her to decorate, even such things as putting flowers in the living room. Her plan, quite obviously, is to drive Eden to leave him -- he can't initiate a divorce, because his mother wants him to become Senator eventually. Eden begins to decline, and then becomes pregnant, but loses the baby after a particularly bad fight. Jerry, a very weak man, cannot see how badly his mother is behaving. And he begins to see Elizabeth innocently, while Eden associates with some of the more intelligent and independent local wives. All comes to a head, though, when Jerry's old roommate visits, and they go out drinking (to Canada, as this is during Prohibition), and it comes out that Eden and he had, er, misbehaved some years previously. Jerry is hypocritically furious, and before long the marriage seems over, and Eden returns to New York.

Meanwhile, Jake's wife has died, and so in New York he and Eden begin to see each other, but he is noble enough to realize that she will never love him, so he takes no steps to get truly closer to her. Meanwhile, Elizabeth and Jerry are seeing each other -- but, again, good girl Elizabeth, after a close call, realizes as well that much as she would love to be with Jerry, that would be wrong. But Eden and Jerry are both convinced the other wants a divorce, so ...

Well, of course you know how this will end. The novel is indeed, as Kirkus says, "not important". And its flaws are many. For one thing, the Depression is barely acknowledged. You would think that might have impacted the banking business. For another, Jerry is so weak compared to Eden that their romance doesn't always really convince -- though Corliss is well aware of this, and papers it over fairly well. (Though, really, the two differently strong women leads -- Eden, and Jerry's mother -- are less convincing characters -- Mrs. Evans is a bit cartoonishly evil, and Eden in some ways too perfect -- than Jerry and some of the other lesser characters.) The opening chapters, as I suggested, drag somewhat, but the novel does find some momentum. Some of the descriptions of Vermont society are pretty convincing, and the characters of Eden's friends among the wives are pretty well depicted. The ending is just a tad contrived. This novel indeed is what it is, and while I have no particular reason to seek out more novels by Allene Corliss, nor to think she needs revival, I enjoyed it enough on its own terms, and she surely deserved the apparent modest success she enjoyed.
Posted by Rich Horton at 4:47 PM