A Mystery Ace Double: Maigret Has Scruples/Maigret and the Reluctant Witnesses, by George Simenon

My previous Ace Double reviews have mostly been of SF books, but the Ace Double series included books in many genres. So, I'm including this review in this series of otherwise SF reviews because it's a nice way to illustrate the fact that the Ace Doubles, for the first decade or so of their existence, featured not just SF novels but other genres -- mostly mysteries and westerns but other types as well (for instance, a couple of P. G. Wodehouse novels appeared in an early Ace Double).

About a decade ago I read every Georges Simenon Maigret novel I could find. I don't think I found quite all of those available in English, but I think I got pretty close. These two novels were among those I read, but I was happy to reread them. This Ace Double dates to 1962, but the novels were first published in French and in English translation somewhat earlier: Maigret Has Scruples in 1958, Maigret and the Reluctant Witnesses in 1959. The novels are of almost identical length, at about 46,000 words (most of Simenon's Maigret novels were written to a consistent length). (The cover and spine list the title of the second book as Maigret and the Reluctant Witness, but the title page has the correct plural.) Both novels were translated by Daphne Woodward. The French titles are Les Scrupules de Maigret and Maigret et les témoins récalcitrant. 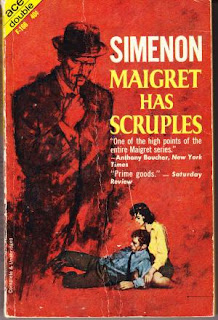 Maigret Has Scruples is constructed curiously. Instead of solving an already committed crime, Maigret is charged with preventing a potential crime. A man comes to see him, and tells him that he believes his wife is planning to murder him. He offers evidence in the form of some rat poison that he has discovered, but leaves before Maigret can question him further. Somewhat later the wife shows up, and tells her side of the story, basically admitting that she knows of her husband's suspicions, but thinks he is mad.

Maigret somewhat reluctantly begins to investigate, rather hamstrung by a bureaucracy that makes it hard for him to commit resources to investigation of a crime that has not occurred. He also makes a quick study of psychiatry, hoping to be able to understand if either the man or his wife is insane. His investigations quickly establish that the situation is more complicated: the wife seems to be carrying on an affair with her boss, while the husband is seeing his sister-in-law. And then there is the matter of the insurance policy the couple has taken out, to be paid to whichever spouse survives the other.
The situation seems easily enough solved: a divorce, followed by each taking up more formally with their preferred companion, but human nature being what it is, that solution isn't taken. Instead, despite Maigret's investigation, he is unable to prevent a murder, though he is readily able to solve the murder once it occurs. The actual mystery is all but negligible (and it depends on a geometrical solution that I don't think would have worked!), but the central interest of the story is in the people, and that works well, particularly the comparison of the damaged marriage of the two principles with Maigret's very successful marriage. 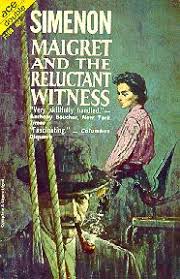 Maigret and the Reluctant Witnesses is slightly more conventional. A man is murdered in a Paris suburb. He was the director of an old, failing, biscuit manufacturing company. (Biscuit = cookie -- I am pretty sure the translator, Daphne Woodward, was English. Sometimes separate American translations of Maigret's novels were made, but often enough (and sensibly enough) the American publishers procured the UK translation.) When Maigret arrives at the decrepit old house of the family that owns the biscuit company, he finds a surly and silent bunch, all seemingly unwilling to answer questions, and eager to promote the theory of a panicked burglar as the murderer.

Maigret must sort through the tangled, sad, story of a family declining from prominence and riches to grubby poverty. There is a senile old patriarch and his wife, a long-time maid, the murdered man's brother and his young, rich, wife, a bookkeeper, a possible boyfriend, and a long-estranged sister. As with many of the Maigret stories, the mechanics of the murder -- the timing and means and so on, are of little interest and not terribly "mysterious". The interest is in unraveling the psychology of the murdered man and those around him -- usually revealing a somewhat sordid story, with money and sex often entangled. I'd not rate this as one of the best Maigrets, but it is quite typical of the Maigret of the 50s, probably the archetypical period of Simenon's writing: certainly well-worth reading. (Much the same thing could be said in summary of Maigret Has Scruples.)
Posted by Rich Horton at 8:13 PM