Old Bestseller: Casuals of the Sea, by William McFee

Old Bestseller: Casuals of the Sea, by William McFee

This 1916 novel was not a bestseller. Indeed, Christopher Morley, in his introduction to the 1925 reissue, remarked "Casuals of the Sea is a novel whose sale of ten thousand copies in America is more important as a forecast of literary weather than many a popular distribution of a quarter million". But, as Morley's introduction hints, it was a well-regarded book. It had the aforementioned 1925 reprint (which is the edition I have), and a 1931 edition from the Modern Library (which also reprints Morley's introduction). It retained something of a reputation throughout the author's life, and indeed I can find it discussed with respect as late as 1990, but it almost seems to have vanished from the literary consciousness in the past quarter century. 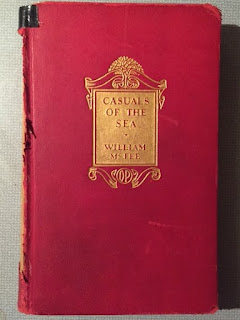 William McFee (1881-1966) was born to an English father and a Canadian mother on board his father's ship. He was educated in England and became an engineer, not surprisingly turning to the sea, serving as an engineer in merchant ships and, during the first World War, in the Royal Navy. He spent time before the War in the US, and moved there permanently after the War. He became a full time writer in 1924, though he had published a fair amount of fiction and nonfiction while still at sea. He was best known as a writer of sea stories (not surprisingly), though despite its title, his most famous book, the novel at hand, Casuals of the Sea, is only to a small extent set at sea.

Many of the books I have read for this series of reviews are relatively negligible -- some are downright bad, many more are enjoyable on their own terms, "of their time", as it were, but ultimately rather minor work. Casuals of the Sea is something different -- a curious and quite impressive work. It is a bit slow, though it held my attention throughout. And the closing (and most affecting) segments are driven by some significant coincidences, a fair amount of sentimentalism, and a bit of over convenient character development. I suppose, as well, that the slightly paternalistic, perhaps overknowing, attitude of the authorial voice towards things like class and gender roles is a bit old-fashioned. All that perhaps explains why the book seems perhaps forgotten.

That is as it may be. But I think Casuals of the Sea is still something quite remarkable. As I said, it moves somewhat slowly, but it remains absorbing. It is ultimately very moving, in a quiet way. It seems very realistic -- the descriptions of life in the Suburb, the City, and at Sea, as the three section titles of the novel have it, came off to me as spot on. The main characters, particularly the nominal protagonist, Hannibal Gooderich, and his half-sister Minnie, really come to life (if, as I said, towards the end they seem to grow just a bit in ways useful to the novel). The prose is very sound, and when it needs to be it's quite nice. I don't think it's a great novel, nor a classic, but it's a fine novel, and it seems worthy of the position I gather it had attained for most of the last century: a respected work, the major novel of a minor writer. So it's a shame that it's no longer -- as far as I can tell, perhaps I am wrong? -- known at all.

Casuals of the Sea is a fairly long novel (perhaps 175,000 or more words). The following summary will cover pretty much the entire plot -- so, spoilers beware, but this is not really a novel that can be spoiled.

The first section is called "The Suburb". It opens on a snowy day in North London, some time in the 1890s, with a snowball fight between the boys of a Grade Board School and those of a Catholic school. Our attention is drawn to Bert Gooderich, who leads the public boys to victory -- we realize he is a poor student but are told he will be a soldier. The impression is that the book will focus on him, but instead he has a minor role. Attention passes to his mother, Mary, some years earlier, as she comes from her farm home to the city to take up service. She gets in trouble, goes home to have the baby, and is surprised at the forbearance of her mistress. An attempt to make the father do his duty, as it were, fails utterly (he has run off to Canada), but Mary is able to marry Herbert Gooderich, a somewhat hapless fitter at a local factory. Wilhelmina (Minnie) is her first child, and she has two more by Herbert, Bert and Hannibal (named after one of the few horses his father actually won money on). The rest of the first section follows the school years of the children -- Minnie is fairly clever, Bert, as noted, quite useless, and Hanny is rather dreamy. All things change when the elder Bert Gooderich, already doing poorly at his job, manages to drown himself one drunken night. By this time Minnie has had a fairly good job in a photo shop, and has had one boyfriend, whom she throws over when he objects to her smoking. Hanny is still in school, and Bert the younger is ready to join the Army (and he will soon be killed in the Boer War).

The second section ("The City") is primarily concerned with Minnie's somewhat rackety career. She loses her job in the photo shop when it is sold to an American concern (which will replace the workers with a new machine), and gets a position with a curious woman named Mrs. Wilfley, a sort of spiritualist who writes books and runs a sort of salon, and makes her money writing advertising copy. One of Mrs. Wilfley's acquaintances is an energetic young man named Anthony Gilfillan, who is attracted to Minnie. Soon she is in love with him, and he proposes that she become his mistress. (There is no question of marriage, due to class differences and to Gilfillan's devotion to his career.) She is happy in this role, and when he moves on, she (now living in France) takes up with a series of men, the last of whom, some 5 years later (it is now about 1905), is a sea captain, George Briscoe. When that relationship ends, she returns to England in the company of a French woman, a dressmaker. And shortly thereafter, Captain Briscoe, missing her, makes the surprising decision to ask her to marry him, and she accepts.

Finally, "The Sea", the third and longest section, centers on Hannibal, the youngest Gooderich. As it opens he is getting into trouble -- he's lost his first job (for laziness, it seems) and is in with a bad crowd, doing minor pilferage and such. Mrs. Gooderich, much hating to do this, thinks of sending him off to sea -- their old neighbor, an American woman named Mrs. Gaynor who had been a great friend to Minnie, has a son who is on a ship. But first she turns reluctantly to her brother in law, a fairly well-off man named Brown. He has just inherited the lease on a tobaccanist's shop, and his energetic daughter Amelia wants to make a go of it. They decide that Hanny ought to help out Amelia with the shop, and so he does. Before long Amelia has more or less decided that she will marry Hannibal -- but he kicks up his traces (influenced in part by his friendship with a used bookstore owner, who has introduced him to sea stories), and, after a coincidental encounter with Captain Briscoe at the shop, decides to take a position that has just opened up on the Caryatid, Captain Briscoe's steamship. (Neither has any idea that they are soon to be brothers-in-law.)

There follows the story of Hannibal's journey around the world, during which he at last -- he imagines, more or less correctly -- becomes a man. He falls for a barmaid in Swansea, an intelligent and ambitious girl who is about to take over a bar of her own. He learns his trade at sea, first as steward's mate, then as a fireman in the boiler room. There are adventures of a modest sort -- Hannibal saves the ship from fire at one point, and he makes a sort of a friend of a man who he then sees die of fever, and he meets Hiram Gaynor in Japan and Hiram takes him to a geisha house (or something of that sort), and he ends up catching a bad illness on the way home. In the process he and Captain Briscoe realize their relationship, a somewhat awkward situation.

On his return, after Captain Briscoe gets in trouble for having beached the ship, Hannibal marries the girl in Swansea, and they settle happily into married life. Meanwhile Minnie has a child -- perhaps it is Briscoe's (the timing is reasonable), but her insistence on naming the boy Anthony (as in Gilfillan) raised my suspicions! -- and she turns to writing advertising copy with Mrs. Wilfley. Hanny is happy as a bar owner, wholly under his wife's domination, but she is a pleasant and sensible woman and he is a pliant young man. However, his health never quite recovers from his illness at sea, and (in a somewhat too programmatic conclusion) he begins to take a patent medicine which his wife recommends based on a advertisement written by his sister. The combined effects of a weak constitution, his illness, and the noxious "medicine" do him in, and in a, for all its contrived nature, quite moving conclusion, he dies very young, but somehow happy, just as his son is born.

That's a bald outline of the plot, but I don't think it gets very well at what I liked about the book. The characters are really a big part of it -- they do come off as real people. There are many I have not described much. Mrs. Gaynor is an intriguing and very grounded person. Hanny's various shipmates are an interesting lot. The Brown family are a nearly perfectly realized middle middle class clan -- having just come to modest prosperity, convinced of the virtue of their ways, certain of their control over their circumstances. Hanny's wife, and her Welsh name, Nellie Ffitt, are a delight. Anthony (later Sir Anthony) Gilfillan is absolutely a "man on the make", but he seems to deserve his success still. A few details didn't quite convince me -- Minnie becoming a suffragist (but not, she insists, a suffragette!) felt a little off; and as I hinted above, Hannibal's late growth from delinquent to fairly enterprising and eager seaman reeks a bit of convenience. But such cavils aside, in its whole the book really impressed me -- always enjoyable, precise and plausible in its depiction of English life at the turn of the 20th Century, and when it wants to be, quite profoundly moving.

The "casuals" of the title are people like Hannibal and his parents -- casually drifting along, taking what life has to give them, bad and good. They are contrasted to the "efficients" -- the Browns, Anthony Gilfillan, Hannibal's wife -- perhaps even Minnie has grown to be "efficient" by the end. One senses that the author's attitude towards the "casuals" is a mixture of affection and exasperation, while towards the "efficients" he is somewhat suspicious of their striving, but respects their energy and discipline. Though really he is not attempting to make any moral point so bald as that.
Posted by Rich Horton at 7:29 PM