The title page of this book lists A. Conan Doyle, as "Author of Round the Red Lamp, The Stark Munro Letters, The Exploits of Brigadier Gerard, etc.". See anything missing?

Doyle had one book make the Publishers' Weekly list of the top ten bestsellers of the year -- The Hound of the Baskervilles, in 1902. I also found an intriguing blog, http://earlyamericanbestsellers.blogspot.com, produced at BYU, that attempts to list bestsellers from before actual bestseller lists started (in 1895), which lists The Sign of the Four as one of the top four bestsellers of 1890, and The Adventures of Sherlock Holmes for 1891. (The other writers on the list for those years were James Barrie and Rudyard Kipling.) So why wouldn't those books be listed on the title page of Rodney Stone? I suspect perhaps Doyle himself forbade mention of the Holmes books in a book published in 1896 -- he had killed Holmes off in 1893, and he didn't appear again until 1901, as Doyle concentrated on historical novels. Doyle considered the Holmes stories potboilers, and felt that his historical novels were his best work. (By the way, A. Conan Doyle was the form of his name that Doyle usually used as a byline.)

There's not much point in me detailing Arthur Conan Doyle's biography -- most people have heard of him. He was born in 1859, died in 1930. He certainly remains by far best known for Sherlock Holmes, but other works like the Professor Challenger stories and the Brigadier Gerard stories are still well-remembered, and his historical novels, though not well-known these days, seem to be reasonably highly regarded. He also helped popularize, and exaggerate, the mystery of the Mary Celeste (which he misspelled Marie Celeste, and his misspelling is probably seen more often than the correct spelling); and he was famously fooled by the photographs of the Cottingley fairies. Some think he was involved in the Piltdown Man hoax. 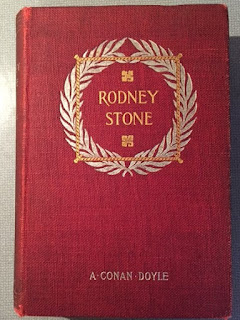 My edition of Rodney Stone seems possibly the first American edition, from D. Appleton and Company. It features several rather fine illustrations by Sidney Paget, who also illustrated many of the Holmes stories. The novel was serialized before (or perhaps roughly at the same time as) book publication, in the Strand magazine in the UK (but not in the American version of the magazine, as Doyle had sold US serialization rights separately (to a newspaper syndicate) -- this was the first time the US and UK editions of the Strand differed substantively, and it also was, I am given to understand, the first serial to appear in the magazine.), 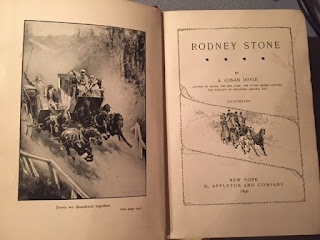 Rodney Stone is the name of the narrator, who tells this story in 1851, reminiscing about momentous events of his youth. (So that the story is purposely twice historical -- Doyle of course is writing decades after 1851, which is decades after the events of the novel.) He cautions us that he is but a minor character (and he's not lying), which makes the choice of title a bit odd. Rodney is a member of a naval family, and indeed his father is away at sea when the book starts. Rodney lives in Friar's Oak, a small village near Brighton. His best friend is Jim Harrison, the nephew of the local smith, Champion Harrison, so called because he was a great boxer until his wife made him give it up.

A significant early episode is a visit by the two boys to a nearby haunted mansion, Cliffe Royal, where a notorious murder occurred years earlier. It seems that Lord Avon, the owner of Cliffe Royal, was playing cards with his younger brother, and with Sir Lothian Hume and Sir Charles Tregellis. (Tregellis is Rodney's mother's brother.) Avon's brother won heavily, and was found with his throat cut the next morning. Avon was seen holding a knife, and he fled to American instead of standing trial. Lothian Hume would be the new Lord Avon were the original shown to be dead. The boys, on their visit, see the bloodstains -- and also see a ghost.) Another important episode in the lives of the boys comes when a dissipated woman (once a famous actress) takes up residence in the town, and Jim Harrison manages to influence her to give up alcohol.

The Peace of Amiens comes, and Rodney's father comes home. But it is decided to importune Sir Charles Tregellis, a famous dandy, to take Rodney (now about 17) to London to polish him a bit. Tregellis agrees to do so, as long as such of his activities as his upcoming bet with Lothian Hume on a boxing match are not in conflict. Hume is backing a young boxer from the West Country. Sir Charles doesn't have a contestant yet -- he hints that Champion Harrison might do, but Harrison, mindful of his promise to his wife, refuses. There follows a fascinating dinner with a number of members of the Corinthian set, and with many famous boxers. Hume (who is severely in debt) pressures Tregellis to name his man -- and suddenly Jim Harrison shows up, and volunteers to face the West County boxer.

So Jim goes into training, while Rodney follows his Uncle around town, astonished by the exaggerated artificiality and silliness of his manners, while seeing occasional hints of a stronger man behind the foppish exterior. It soon becomes clear that Rodney is ill-suited for the fashionable life, and fortunately, the Peace is over, and Rodney's father arranges with Lord Nelson for a position for Rodney in the Navy. (So we get to meet two more famous people: Nelson, and also his mistress Lady Hamilton, who is portrayed with absolute viciousness by Doyle. Rodney had previously been introduced to the Crown Prince, later the Prince Regent, later George IV -- he too is portrayed in a rather negative fashion. He also meets Beau Brummel, a friend and rival of Tregellis.) But before Rodney and his father go to see, it's time for the climactic boxing match.

There are rumors of foul play -- it seems that Sir Lothian Hume has hired some toughs to try to injure Jim Harrison and cause the match to be forfeited. And, indeed, on the morning of the fight, Jim is missing! What will Sir Charles do?

Well, I won't reveal who fights, though I will say that the boxing match is a pretty satisfying set piece. And, of course, that's not the climax of the novel -- the real climax is the revelation of what really happened that night long ago when four men were playing cards at Cliffe Royal. This of course has significant implications for several people, some of whom might be a surprise. I will say that I had guessed most of this -- most readers will -- and I'll add that I was disappointed by some of the details I didn't guess.

All in all this is a pretty satisfying historical novel. Arthur Conan Doyle, undoubtedly, was more than just the author of the Sherlock Holmes stories. He was proudest of his historical novels -- I'm not sure I would go so far, but certainly Rodney Stone confirms that he was an effective historical novelist.

I will add that this book, set about a decade before the Regency, seems possibly an influence of the novels of Georgette Heyer -- the portrayal of the dandy set in particular seems familiar. And, interestingly, the male protagonist of Heyer's first significant novel, These Old Shades, is the Duke of Avon -- echoes of Lord Avon in this book (though Heyer's Duke and Doyles Lord Avon are otherwise radically different characters.)