Like many kids in my generation -- and perhaps to this day! -- I used to get paper (kind of newsprint) order forms for various arms of Scholastic Publishing at my schools. I was happy to order books through them, for 35 cents or whatever. I don't remember getting a lot of SF though -- in fact, the only SF book I remember getting from Scholastic for sure was Stranger From the Depths, by Gerry Turner (a fairly well-remembered book, reprinted by Scholastic in a sharply abridged edition in the early 70s -- the novel was first published in 1968).

I did read one such book from the library, when I was 10 or so -- Revolt on Alpha C, by Robert Silverberg, his first "novel" (very nearly his first published fiction) -- a juvenile that came out in 1955 from Thomas Crowell and was later reprinted by Scholastic.

The other day, however, at an estate sale I saw three Scholastic Books in pristine condition: the aforementioned Revolt on Alpha C, as well as The Forgotten Door, by Alexander Key, and The Runaway Robot, by Lester Del Rey. I was familiar with all these books by title, and I figured I'd snap them up and read them.

I could somewhat jokingly say that "Lester Del Rey" was a pseudonym, used by such writers as Robert Silverberg and Paul Fairman, as well as by Leonard Knapp. That's an exaggeration. But in fact Lester Del Rey was the name used by the man born Leonard Knapp. I don't know if he ever legally changed his name. He used to claim his real name was Ramon Felipe Alvarez-del Rey. He did use a variety of other pseudonymns, such as Philip St. John and Erik van Lhin. He did some major SF work early in the Campbell era, most notably the robot story "Helen O'Loy" and a tense novella about a nuclear disaster, "Nerves". Most of his later contributions -- quite major contributions! -- to the SF field were as editor, of a number of SF magazines in the 1950s, and of books most significantly in the 1970s (it was he who discovered Terry Brooks' The Sword of Shannara). His writing career went by fits and starts -- he apparently suffered repeatedly from writer's block, and so turned to the likes of Silverberg to write stories he had agreed to do. And, for The Runaway Robot, he apparently contributed an outline that Paul Fairman, a hack writer who had had an undistinguished (to say the most) career at the helm of Amazing in the 1950s, and who later wrote a novelization of the short-lived 1970s sitcom Bridget Loves Bernie (a show I remember with some affection), turned into the finished novel. The book first appeared in hardback from Westminster Press in 1965, and was reprinted by Scholastic in 1966. This edition is illustrated by Wayne Blickenstaff. It's the longest of these three books at just under 50,000 words -- the other two are a bit shy of 30,000 words each. 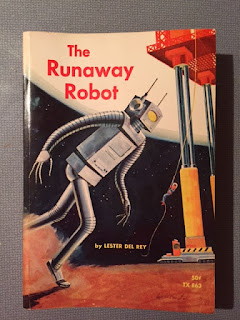 That's not an encouraging gestation -- and in some ways The Runaway Robot is a pretty bad book. The plot stretches our credulity, and the science stretches it even farther. But in the end, I thought it pretty good in one important way. It's told by a robot named Rex, who has been a companion to Paul, a boy on the Jupiter satellite Ganymede. When Paul's family is recalled to Earth, they decide they can't take the robot. He is sold to a fungus farmer, but he doesn't like his new life, and he misses Paul, so he runs away to at least see Paul one more time before he leaves. But Paul sneaks away, and convinces Rex to help him stow away on a freighter headed to Mars and then Earth. Rex manages to get the two of them onto the Terrabella. He hides Paul, and he convinces the Captain to "hire" him -- and makes a great impression with his cooking. Inevitably Paul is discovered, and the Captain is angry and turns them into the authorities on Mars, but Rex comes to the rescue once again and escapes, then sends Paul home to Earth, while rejoining the Captain as his ship heads to Earth then Ganymede. But once on Earth, more adventures happen, and in the end ...

Well, I won't spoil it. And, as I suggest, the plot is really kind of silly. But the book is redeemed by one aspect -- Rex. His character is really well handled. He's a fairly intelligent robot, but as he tells the story, robots, of course, are not really intelligent, and really don't have feelings, or imagination, etc. All along Rex is demonstrating tremendous intelligence, impressive imagination, and true emotion. (He's certainly a lot smarter, and a lot more likable, than Paul!) All this is presented pretty humorously -- I thought it really worked. I certainly rooted for Rex -- and so the inevitable ending was satisfying (though plotwise it happened entirely too quickly).

The Forgotten Door is another 1965 book originally published by Westminster, that had a reprint edition from Scholastic, apparently also in 1965. The author is Alexander Key (1904-1979), an illustrator and author, probably best known for Escape to Witch Mountain (1968), which has been filmed multiple times. My scholastic edition is illustrated by Dom Lupo. 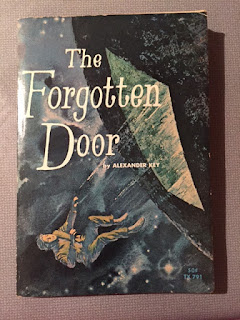 The Forgotten Door shares themes with multiple Alexander Key books -- themes that suggest he kind of hated most people. The story opens with a boy stumbling into a pit of sorts, and coming out in an alien world -- Earth, presumably the North Carolina mountains where Key lived. The boy is schocked when the first people he meets seem hostile -- and especially shocked when they shoot at a deer he has befriended. We quickly gather that this boy -- who can't remember his own name -- can sense people's -- and animal's -- thoughts. He finally encounters a friendly family, the Beans. Over the next few days the boy gains a name -- Jon -- and becomes close to the Beans, but finds little but suspicion elsewhere. He is accused of stealing (the real villains are a couple of no good local kids from a no good local family (the adults are also persistent thieves) -- it soon seems that all the locals are no good except for a kindly judge). He is threatened with entry into the web of social services. The government hears of him and soon wants to examine him and probably make use of his telepathic talents. (And there are hints that Russian agents are also on his track.) In a desperate conclusion, his only hope -- and indeed the Beans' only hope -- is that he can find the "door" he entered Earth through and return to his home planet -- along with the Beans, who conveniently have no real ties and pretty much seems to hate everyone anyway. (Granted, the story makes it easy to see why they'd hate the people around them, but I really felt the author had his finger pretty heavily on the scales.)

It's an exciting and involving story, and there are moments that are really moving. And I think I'd have loved it if I read it age 10 or so. But I felt now that Key was having things his way with plot and character manipulation, and the sense I got of real dislike of the human race really bothered me, and struck me as essentially unfair. I didn't believe in his aliens (granting that we couldn't see them enough to really know them), and I thought the conclusion was kind of unearned, and an escape, not a resolution. Finally, Revolt on Alpha C. This as I noted above I first read when I was about 10. It might have been the first real Science Fiction book I read (that is, if you don't count the likes of Danny Dunn). It first appeared in 1955 from Thomas Crowell. Silverberg was 20 at the time (his first two stories had appeared in magazines in 1954). Scholastic reprinted it in 1959, and it went through numerous printings subsequently: my copy is the 4th Scholastic printing, from 1963.  The illustrations are by William Meyerriecks.


As it happens, the original order form which the original buyer used to order his copy was neatly folded inside the book. I've reproduced it here. As you can see, it was sold through "Arrow books" -- Scholastic had a few different "book clubs", I think arranged by age -- one of the other ones, if I recall, was TAB. 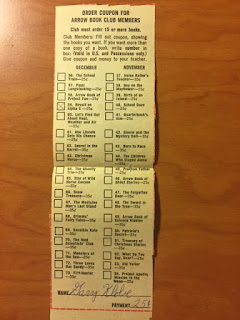 It's the story of Larry Stark, a young man (20, just like the author) on his final cruise before graduating from the Space Patrol Academy. They are heading to the colony on Alpha Centauri IV. He has a couple of fellow Patrol soon to be graduates along with him. One of them is a rather combative young man, somewhat shorter than the average, whose name is "Harl Ellison". Sound familiar? (I asked Silverberg about this, and he said that for this book he used names of several friends for character names -- that is, he "Tuckerized" them -- a practice which he soon abandoned.)

On the way Larry realizes that his friend Harl has some odd ideas, repugnant to Larry, whose father and grandfather were in the Space Patrol. Harl is not convinced that Earth is always right -- in fact, it turns out, he was born on Jupiter, part of the failed colony there, which was crushed by Earth when they made a bid for independence. This turns out to be important when they end up at Alpha C and find that the colony there is in the throes of a revolution. Many parallels are drawn to the American revolution, but Larry is stubborn in trusting his father and the chains of authority.

He has some adventures, including a trip to one of the four colony cities as a spy for the Earth government. This involves an implausible flight in a helicopter without enough fuel, and a dash through the jungle with a Tyrannosaurus Rex on his tail. (Alpha C IV is represented as being in the equivalent of the Mesozoic Era, and apparently a whole lot of parallel evolution has occurred.) He is thrown in jail, but escapes, and returns to his commander, only to have a crisis of conscience when he realizes that the commander's plan to quash the revolution involves destroying at least one of the colony cities. He must choose between abandoning his career (and disappointing his father), or allowing an atrocity to occur.

It's a beginning writer's book, and it shows. Silverberg is one of the SF field's greats, but it doesn't really show here (not surprising for a book he wrote so early in his career.) The book still moves briskly, and reads nicely enough (though the prose is quite wobbly compared to the mature Silverberg). The science is, let's say, inconsistent -- an attempt at reasonable plausibility (by '50s scientific standards) is made, but there are still howlers. (Like the implication that when you're on Pluto you're closer to Alpha Centauri.) The economics of the colony planets don't hold together at all. The Captain's actions, and how he utilizes his personnel, strained my belief. The central conflict of the story actually could have been pretty wrenching if told with a bit more subtlety.