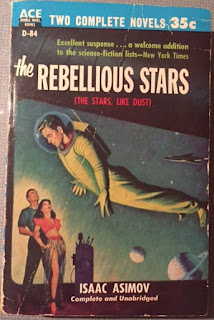 I'm headed to Kansas City for the World Science Fiction Convention tomorrow, so I'll make an early post this week, and make it an SF post. Here's an Ace Double featuring a major writer, with perhaps his weakest novel, and a very minor writer, with his only SF novel. I wrote this back in 2004 or so. 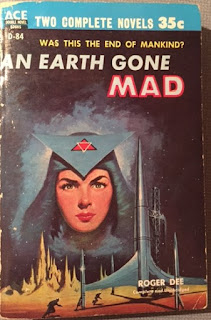 This early Ace Double features one of only a couple Isaac Asimov appearances in the format. The Rebellious Stars is better known as Tyrann, under which title it appeared as a Galaxy serial in 1951. (OK, it's even BETTER known as The Stars, Like Dust, Asimov's preferred title and the title of the original 1951 Doubleday hardcover (and of all English-language editions since then, as far as I know, saving only this Ace Double).) In this edition it is about 67,000 words long, and the book is labeled "Complete and Unabridged", so as far as I know it's the same as the standard edition. The title change is typical of Don Wollheim's habits, though to be fair The Rebellious Stars is a fairly appropriate title (arguably more appropriate, if less poetic, than The Stars, Like Dust). Also, the original book title is given in parentheses on the cover, so book buyers weren't likely to be fooled into getting a book they already owned. The other half, An Earth Gone Mad, by Roger Dee, first appeared as "The Star Dice" in Startling Stories, November 1952, but this edition, the first and only English language book edition, may possibly be expanded. (At any rate, the copyright date is 1954, while that of The Rebellious Stars remains 1951, implying that the Dee novel had been changed.) This novel is some 54,000 words long. The cover artists are Ed Valigursky (for the Dee novel) and Harry Barton (for the Asimov novel).

Isaac Asimov was probably the SF writer I came to earliest after knowing there was such a thing as SF, and the first SF writer I read widely. (Though Clarke cannot have been far behind.) So I read much of his work quite young. I was perhaps only 12 when I read The Stars, Like Dust. I've always remembered it, if only dimly, with pleasure. Thus I've tended to bristle just a bit when I read contemporary discussions of his novels, which usually list this book as the least of his earlier, adult-marketed, novels. But now, three decades later, I've finally reread this book for the first time, and I have to say the people who denigrate it are right! It's a weak novel, quite a disappointment, to my much older sensibilities. That said, it does have some of the Asimov flavor, and while it must rank quite low in his bibliography, it's still reasonably enjoyable to read.

The story opens as Biron Farrill, the heir of the Rancher of Widemos on the planet Nephelos, is about to graduate from his university studies on Earth. He is wakened one night by a ticking which he soon determines is a bomb -- an assassination attempt. Soon Sander Jonti, a friend of his from the university reveals that his father has been arrested by the Tyranni, the harsh ruling class that controls some 50 planets near the Horsehead Nebula, including Nephelos. It seems Biron's father was involved in a resistance movement, and Jonti is as well. Jonti convinces Biron that his life is in immediate danger, and sends him to another world, Rhodia, in hopes that the Director of Rhodia, Hinrik, can intervene.

But while Biron is in transit he is arrested. The Tyranni, however, arrange for him to meet with the Director anyway, apparently believing that the weak, nearly mad, Director will turn him over again, a politically advantageous action. However Biron manages to meet the Director's beautiful daughter, Artemisia, and his cousin, Gillbret, and the two of them arrange to escape with Biron -- it seems that have been waiting to do so but have needed help from someone who can pilot a spaceship, that knowledge being forbidden in the Tyranni-ruled worlds. Fortunately Biron learned spationavigation on Earth. And they are off again, on a convoluted chase, looking for aid at a world Gillbret once visited, then looking further for a mysterious "Rebellion World". The plot takes several twists from that point -- it is all rather intricately designed -- before reaching a somewhat surprising (though dare I say rather guessable) conclusion.

What bothered me? One thing, of course, is the infamous subplot, added at Galaxy editor H. L. Gold's insistence, about a search for a document which will be the downfall of the Tyranni. Surely this document is the plans for a super weapon? No: surprise!, it's the Constitution of the United States. But that aside (and, really, that subplot is easily mentally excised -- it certainly shows signs of last minute pasting in), More annoying is some of the crude derring-do, and the way the villains and semi-villains foolishly leap into action themselves, and the way the various characters change to meet the requirements of the plot, and the incredibly intricate webs the plotters spin when very direct and obvious action would solve things ... all, really, cliches of the genre, and in many ways the sort of thing that Asimov often avoided in the Foundation stories, which after all predated this novel. There is also plenty of blithe, fingernails-scraping-on-chalk, sexism in the characterization of Artemisia. There is some standard issue Evil Overlord dialogue. And there isn't much in the way of real, meaty, SFnal ideas behind the story -- that's the sort of thing we read Asimov for, and the sort of thing he usually provides quite well, and it really isn't present here. (One might also complain about Asimov's character names -- especially the awkward modifications of contemporary names (Biron for Byron, Hinrik for Henry or Henrick, Gillbret for Gilbert, etc.) -- but that would be idle -- better to simply put up with it as a minor and almost endearing fault of the master.)

I will say that I had a slightly longer list of absurdities to complain about while reading the book, but Asimov explained several of them away quite convincingly -- and I'll add that while the plot is perhaps overcomplicated, and depends quite a lot on people acting in extremely convoluted ways, it is worked out somewhat satisfactorily in the puzzle-unraveling sense.

Roger Dee (full name Roger Dee Aycock (1914-2014)) was a reasonably prolific author of the late 40s and early 50s, working mainly for the lesser magazines of the field. He published close to 40 stories, the great bulk between 1949 and 1955, though the latest story listed in the ISFDB is from a 1971 issue of Worlds of Tomorrow. What I've seen of his work was pretty routine stuff, with the occasional cute idea but no better than mediocre writing and mediocre plotting. An Earth Gone Mad is his only SF novel, though I can find evidence of some work for other genres, for example Let the Sky Fall, a "mystery of forbidden love" from 1957. (I can also find a couple of German editions -- does anyone know to what these titles refer: Das Geheimnis der Würfel and Die Macht des Kyrill?)

The story opens with Paul Shannon leaving Io after having been marooned there for 2 years. (Dee's Io is apparently possessed of a breathable atmosphere and human-edible plants and animals, albeit in a generally hostile environment.) With the help of an inscrutable rocklike alien, he has repaired his crashed spaceship, and he limps back to Earth. But once on Earth, he finds that strange changes have occurred. A growing proportion of the population seems hypnotized into serenity and passiveness by the influence of some strange cubes that dropped from space -- these are the Cubists. (I don't know if Dee intended a reference to the modern art movement.) The rest of the US seems split down the middle -- the corporate oriented "Syndicate" is pro-Cubist, more or less, because the Cubists make tractable workers, while the labor unions are opposed, because Cubists are taking the jobs of ordinary workers. The government tries to toe a middle line.

Shannon's instincts are strongly anti-Cubist, especially after he encounters his fiancee, who has become a Cubist, and is horribly changed thereby. He becomes obsessed with finding a way to counteract the effects of the Cubes. But he also finds himself mysteriously pursued by several different agents -- people from the government, the unions, and the syndicate (including his Space Service employers). And he has been impersonated, with his stand in having delivered a rabid anti-Cube rant during a staged interview. Finally, he is picked up by a beautiful, fiery, young woman, Ruth Nugent, who takes him to another center of resistance to the Cubes -- this a group of scientists (including Ruth's physicist fiance) who have built a NAFAL spaceship with which they plan to flee to Procyon and set up a new colony free of the Cubes. They want Shannon's help -- but he is convinced that there way is cowardly, and that something must be done to free the Cubists from the baleful influence of the Cubes.

The rest of the novel, then, consists of lots of running around, with Shannon encountering representatives of each of the main power centers, and also exploring (with Ruth) an installation, a Peace Center, home to many Cubists. Things seem stranger and stranger -- obviously some weird conspiracy is involved. Could Shannon's old friend Gil Lucas be involved? And why do people seem to be secretly almost herding Shannon? And why is Ruth Nugent both so infuriating and so attractive? Anyway, all leads to a somewhat twisty resolution, complete with some philosophizing about the proper order of society, the place of humans in the Galaxy, etc. etc. It ends up ironically a curious pairing to an Asimov novel, not because it much resembles The Rebellious Stars, but rather because some of the ideas considered resemble ideas from much later Asimov novels like Foundation's Edge and Foundation and Earth. All in all I don't think it a very good novel, but it's a tolerable fast-moving read, with at least a brushing against potentially interesting SFnal ideas. Not really recommend on the whole, but not without some redeeming value.