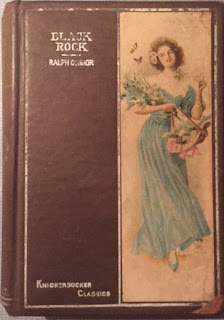 Ralph Connor was, according to the University of Winnipeg library, "the most popular and bestselling novelist of the early 20th Century". I assume by this they mean the most popular and bestselling Canadian novelist. Connor indeed enjoyed broad popularity, but his sales do not seem to have rivaled many American and British novelists. But he did sell very well, and one novel, The Doctor (1908), made Publishers' Weekly's list of the top selling novels of its year.

So -- as you can see, this entry is not only a return to my major theme in this blog, "Old Bestseller", but also to one of the subsidiary themes: Canlit! Without really meaning to, I've covered a number of Canadian authors here: Coningsby Dawson, Robertson Davies, John Buchan, Frederick Niven, Michael G. Coney, and A. E. Van Vogt. I had hoped to cover more -- and I will, soon enough -- but it has been a while.

Ralph Connor was the pseudonym of Charles William Gordon (1860-1937). Gordon was the son of a Scottish missionary to "Upper Canada" (i.e. Southern Ontario). He became a Presbyterian minister himself, later the Moderator of the Presbyterian Church in Canada (the highest position in the church), and later an important figure after the Presbyterians and several other denominations in Canada merged to become the United Church of Canada. Born in Ontario, educated in Toronto and Edinburgh, Gordon went west to the Canadian frontier after ordination, serving in churches first in Banff, then for a long time in Winnipeg. His career in the church would seem to have been enough for most people: not only a significant figure within his denominations, but a major advocate for social issues, particularly labor issues. He served in France in the first World War. He had what seemed to be a happy marriage, to Helen Skinner King, and had seven children, the eldest of whom became a minister as well. (For that matter, his granddaughter, Alison Gordon, was a sportswriter (covering among other things the Toronto Blue Jays) and a mystery novelist.)

And, on top of that, he was a significant writer. He began publishing short stories of the West in the 1890s, and Black Rock, his first novel, was published in 1898. The Sky Pilot, his first major success, followed in 1899. (Four years before Kitty Hawk, one supposes "Sky Pilot" didn't mean what we would think today.) He published a total of 30 novels, many on Western themes, some about the history of Upper Canada.

My copy of the book is a a reprint, presumably from about 1908, quite small (octodecimo? (about 4"x6")), in the Knickerbocker Classics line from Hurst and Company. (Not to be confused with the contemporary Knickerbocker Classics that you see at Barnes and Noble, this was a series of inexpensive small reprints.) It is inscribed "Joe McG. Richerson, Dec. 20 1908" on the first leaf.

Black Rock, as I noted, was Connor's first novel. It opens with the narrator, named "Ralph Connor", being persuaded by his old hometown friend and college mate Leslie Graeme come to the small mining town of Black Rock, in the Selkirk mountain range in British Columbia, for Christmas of 1882. Graeme runs a lumber camp outside of town. The town is almost all miners and loggers, with very few women, and with the main menace a bar/gambling den run by a man named Mike Slavin. We soon gather that the men, most of them roughnecks but basically decent, are in thrall to drink, and many of them, having promised to save their money to send to their families, or at least to set them up with a stake on returning home, routinely waste it all on alcohol or lose it to gamblers.

The main bulwark against this is the minister, Mr. Craig, but he seems to be fighting a losing battle. Much of the novel is concerned with his attempts to form -- and make stick -- a temperance society. To this end he has one key aid -- the beautiful widow Mrs. Mavor, whose husband was a dissipated man of a good English family, sent to Canada to straighten out. Alas, just as he, after the birth of a child, had seemed to conquer his demons, he was killed in a mining accident. Mrs. Mavor has been in despair since then, living only for her child. But Mr. Craig convinces her to join his crusade, and also to resume singing for the men -- one of the few things that inspire them like drink.

And so it goes, with ups and downs. There is Christmas entertainment (Connor is roped in to give a puppet show), and a sleigh race, and some nasty stratagems to lure the men of the temperance society to drink, and a young man fighting his demons and losing, but other men coming to the Lord, and a turning point, I suppose, when bar owner Slavin is shown the consequences of his actions. There is also a romance, and some agonizing over "two calls" -- claims on the attention of both Mr. Craig and Mrs. Mavor. And in the end, as we might expect, triumph, if triumph shaded a bit by some sadness, and some growth for the likes of Connor and Graeme.

All this seems both sentimental, and moralizing, and that's all true. But it's still pretty effective, and moving at times. Part of this is two central characters who seem basically good but only half in with Craig -- the narrator, Ralph Connor, and the somewhat tormented (by a never explained issue dating to his first career as a lawyer) Leslie Graeme -- both are well depicted and believable. Part is that the writing, if not brilliant, is not bad. Mr. Craig and Mrs. Mavor are both a bit too much the paragon, but they are still likable to read about. And the Western landscape, and atmosphere, are nicely and believably depicted.

Probably not a book that will ever again have wide readership (though I believe it's still available in a POD edition), but a book whose past popularity does not surprise.
Posted by Rich Horton at 8:02 PM