A (mostly) Forgotten Fantasy Novel: The Reign of Wizardry, by Jack Williamson

A (mostly) Forgotten Fantasy Novel: The Reign of Wizardry, by Jack Williamson 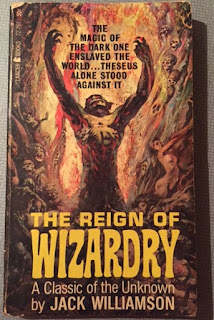 I would have said this novel was completely, not just mostly, forgotten, despite being by one of SF's Grand Masters, but a recent event has changed that slightly: it is a nominee for the Retro-Hugo for Best Novel to be given at this year's Worldcon. I happened across a copy of the 1964 Lancer paperback, its first book publication, at a popup used stuff shop. I thought it a curiosity, and bought it for a dollar. Then I looked at the Retro Hugo nomination list, and was surprised to see it there. Further research showed that while it languished for a long time before finding book publication, and even then was published by a pretty bottom end paperback house, it's been reasonably well-treated since then, going through several Lancer reprintings, and a nice 1979 hardcover edition from small press Phantasia Press. It's currently available from Gateway/Orion in ebook form. So I suppose not so forgotten as all that.

I will say, however, having read it, that I don't think it's all that good. And its presence on the Retro-Hugo ballot is a bit curious considering that Williamson published another fantasy (or perhaps more properly "science fantasy") novel in the same magazine (Unknown) in 1940, a much more widely remembered novel (or so it seems to me): Darker Than You Think. The problem is, somehow Darker Than You Think made the Retro Hugo ballot as a novelette! It's ineligible in that category (far too long!) so it had to be removed. I don't know how people got so confused. It's true that it appeared in a single issue of Unknown (The Reign of Wizardry was a three-part serial), but it still took up 80 or so pages. The Reign of Wizardry's three parts occupied perhaps 110 pages. It's about 55,000 words, so if Darker Than You Think is 8/11 of that, it would be right at 40,000 words, right on the novel/novella boundary. (Assuming consistent word count per page of the magazine issues, to be sure.) (It should also be noted that the more familiar version of Darker Than You Think is an expanded version first published as a book in 1948.)


Jack Williamson (1908-2006) needs little introduction to SF readers. His career began in Amazing in 1928, and he was one of the relatively few writers of the early SF magazines to transition to John Campbell's Astounding and maintain or expand his reputation. He continued writing right up until his death, winning a Hugo and Nebula for a story published in his 90s: "The Ultimate Earth". While to my eyes his career underwent significant ups and downs -- little of his work from the 50s through the 80s is of particular interest -- it's noticeable that his latest work, a series of novels and a fair amount of short fiction in the '90s and 2000s, is quite solid, often quite original, always readable and sometimes impressive. He was the second person named an SFWA Grand Master. (After Robert Heinlein, who was one year older than him, before Clifford Simak, four years older. Indeed, the fourth Grand Master, L. Sprague de Camp, was also a year older than Williamson -- somehow, my memory of him is dominated by his period as SF's eminence gris, who lived nearly a century, and so I tend to assume he was older than all the other famous SF writers. After all, he famously was not born in a U. S. state (instead he was born in Arizona territory, four years before it became a state), and he moved to New Mexico as a child in a horse-drawn covered wagon.)

Well, what about The Reign of Wizardry? It turns out to be a retelling of the story of Theseus, and of the Minotaur, though very much altered. It opens with Theseus as a pirate, called Captain Firebrand. His goal is to get to Crete and overthrow the evil wizards who rule Crete, and who also keep other states in the Mediterranean under Crete's thumb, forced to pay tribute and contribute slaves. They encounter a Cretan ship and capture it, and Theseus decides to head to Crete, against the advice of his chief sidekick, Cyron. He also captures a small-time wizard, Snish, who has the power of changing his own or anyone else's shape, though a strong touch (or especially a kiss) will return one to his own shape. Snith was originally Cyron's reward, in the form of a beautiful woman, but when revealed to be a fat little Babylonian, Cyron gladly cedes him to Theseus.

After an encounter with the Cretan navy, and its weak admiral, Snish and Theseus end up shipwrecked, with Theseus disguised as a Norseman. He escapes Talos, the robot guardian of the island, who is looking for the pirate Captain Firebrand. But Theseus' plan is to to be captured and sent to the Games, where if anyone wins they take over the kingdom from evil Minos, who has survived such challenges for a thousand years. The other prize is the hand of Minos' daughter Ariadne, the beautiful but (it seems) evil incarnation of the goddess Cybele. Besides Minos and Cybele, the evil wizard Daedalus is the main threat. Theseus witnesses Ariadne's lack of care for her subjects when she carelessly runs over a little child in her chariot, and he gains her attention in protesting this. This leads -- as he had planned -- to his capture, and then to his implausible victory in the Games -- though perhaps he won a bit too easily? And, of course, once Ariadne, now his betrothed, kisses him, his true identity as a wanted pirate will be revealed and he will be thrown into the maze of the Minotaur.

And so it goes, but Theseus has resources, including the unexpected help of Ariadne (though not with a spool of thread!).  Well, I can't go on -- it continues rather randomly, with the fraught navigation of the maze, a surprising revelation about the true nature of the minotaur, some back and forth with Ariadne, more revelations about her identity, and that of her father, mother, and Daedalus. Oh, and a peoples' revolution.

I found it too silly and slapdash to tolerate. The action is never believable -- things are generally too easy for Theseus. Snish is sometimes an enjoyable enough slimy sidekick, I suppose. Ariadne, as combined love interest/villainess, is never plausible. Minos is quite strangely portrayed, to no good result, really. A very weak novel, I thought.