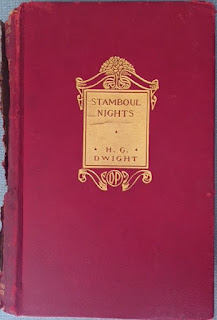 Undoubtedly this was not a best seller, but it sold well enough to have, I deduce, at least three editions -- at any rate, the copyright page says 1916 and 1922, and my edition is from 1926. There is an introduction by John Macy, presumably written for the second edition, that rather gushes about the book and the author, declaring "Stamboul Nights is on the way to becoming a classic." But I don't think that has happened -- indeed the book seems close to forgotten. Dwight was, however, very well reviewed in his time, and considered a fairly significant writer of short fiction. One reason for his diminished reputation may be that Dwight wasn't terribly prolific: he wrote one more collection of apparently quite similar stories, a couple of travel books, on Constantinople (i.e. Stamboul) and Persia. And some books on art: Dwight became assistant director of the Frick collection later in his life.

Harrison Griswold Dwight was born in Constantinople in 1875. He was educated in Turkey, and went to college in the U. S. (Amherst), then became a diplomat, serving for example at the peace conferences following the first World War. His stories appeared in the major magazine of the early 20th Century, and indeed I found a couple of letters from Willa Cather in which she seems ready to buy a couple of his stories for McClure's (where she was editor), and asking for revisions. In the end only one of the stories in this book appeared first in McClure’s ("Mill Valley", called "The Valley of the Mills" in Cather’s letters: apparently her request to "sharpen the point" of "Mortmain" was either ignored or not done to her satisfaction) -- others appeared in the Atlantic, Scribner’s, Appleton’s, the English Review, Harper’s, and Putnam’s (with one original to this book) -- all fairly prominent magazines of the day. Dwight’s introduction does say that each story has been revised for the book publication.

The stories are all set in and around Constantinople, presumably late in the 19th Century or early in the 20th. They are all told by a mostly uninvolved narrator, an obvious stand in for the author. The stories are told in a leisurely manner, with a hint of a sly smile often peeking out behind the narrator’s mask. His attitude towards the Turks and Arabs and Armenians he depicts is sympathetic and broadly approving -- that said, though born and raised in Constantinople, Dwight was a Westerner, so his slant must be viewed as that of an outsider. I suppose it’s possible that a certain flavor of Orientalism has contributed to the book’s current obscurity.

To briefly describe each piece: "The Leopard of the Sea" is an amusing tale of the troubled journey to Yemen of an old steamship called Leopard of the Sea, framed as the narrator’s encounter with a local man while he tries to set up for a photograph. "Mortmain" is about an American missionary building a chapel, the grounds of which are said to contain a treasure of the Armenian church, buried since 1453: an Armenian man wants the missionary to at least split the proceeds with him. "Mehmish" is about an old man, a faithful doorkeeper, looking for a new position after getting out of prison for manslaughter. "The Glass House" is about the history of a strange house formerly owned by a rich patisserie proprietor and his wife. "The House of the Giraffe" is about a truly nasty Pasha, who finally meets his deserved fate when a governmental change is forced. "The Golden Javelin" is about the narrator’s pretty cousin, who surprised her family be marrying an older man, a missionary, and her sad fate and the title objet d’art.

"His Beatitude" is a rather funny caper story, about an old man who is suddenly recruited as the next Patriarch of the Armenian church in Constantinople -- for unexpected reasons. "The Place of Martyrs" is about the doomed affair of an Orthodox boy with an Armenian girl. "Under the Arch" is another story of thwarted young love, this time by a young Anatolian for a prostitute. "For the Faith" is about a missionary and his involvement with a North African man who offers to sell bibles for him -- and what the man was really doing. "Mill Valley" concerns the narrator’s visit to a country village, and a night of drinking, and the shocking result.  "The Regicide" is the least Stamboulian story: the narrator meets an American couple on an ocean liner, and hears their story of their time as diplomats in Basra, and of the wife’s clumsy attempts at promoting morality among the locals. "The River of the Moon" is about an old gun, and a very valuable necklace, and the narrator’s unfortunate mixing up with a criminal act. Finally, "In the Pasha’s Garden" tells of an old Pasha, and his younger French wife, and a conversation they have while the Pasha suspects (or does not?) that she has hidden a lover in the room before he came by.

My favorites, I think, are "In the Pasha's Garden", "The Golden Javelin", "The Leopard of the Sea", and perhaps "The House of the Giraffe".

All these stories, as I suggest, have a bit of humor behind them -- rather fatalistic, though. They are quite nicely written in a distinctly early 20th Century style. It's noticeable that most of the pieces depict sad, sometimes tragic, often criminal, events, but with very light touch. I enjoyed the book -- Dwight was a fine writer, if in the final analysis not quite prolific enough, perhaps not serious enough, to compel significant latter day attention.