Old Bestsellers: The Damnation of Theron Ware, by Harold Frederic 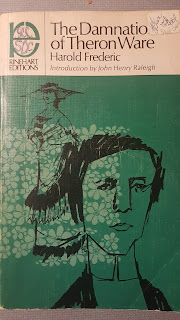 Old Bestsellers: The Damnation of Theron Ware, by Harold Frederic

For some reason the name of this novel has stuck in my head for a long time without me knowing anything about it. The reason is that James Blish used "Theron Ware" as the name of the sorcerer in his novel Black Easter. (I also have a friend named Theron, but that is by the by.) Undoubtedly Blish's choice of name was purposeful (after all, he named the good monks in his novel after SF writers). At any rate, when I ran across  a copy of this book at an estate sale I decided I had to read it.

It was something of a bestseller when it first appeared in 1896, at least for a novel of decided literary ambition. However it seems to have faded from wide attention in the decades after its release (perhaps partly due to its author's untimely death only two years later), only to be eventually restored to a position as a "minor classic" of American literature, of the most determinedly realistic form, in an era devoted to realism.

Harold Frederic (originally Frederick) had an interesting life. He was born in 1856 in Upstate New York (where his best-regarded books, including this one, were set). His father died in an accident when he was 18 months old. He became a journalist, and at a young age was the editor of papers first in Utica, then in the state capitol, Albany. He supported Grover Cleveland, a Democrat, for the Governorship, despite the Republican-leaning tendencies of his readers, a stance that eventually cost him his job. But the friendship of by then President Cleveland served him well when he moved to England to become the London correspondent for the New York Times. He spent the rest of his life in England. He had married in 1877, and had five children with his wife, but the marriage foundered after the move to England, and he set up house with his mistress, another American, Kate Lyon, and they had three more children. Alas, Lyon was a Christian Scientist (it's not clear if Frederic agreed -- he was born a Presbyterian, raised Methodist, and was generally skeptical of religion) -- and after Frederic suffered a stroke she refused medical treatment for him and he died in 1898.

Frederic was a journalist until his death, but beginning in 1887 he began publishing fiction with the novel Seth's Brother's Wife, and eventually he wrote 10 novels and a number of short stories. His work seems to have been generally well-received at the time. The Damnation of Theron Ware (called Illumination in England) was even then surely his best-regarded novel, and it is the only one of his novels to survive in any real sense today.

The novel opens in about 1880 with the annual Nedahma Conference of the Methodist Episcopal Church, a gathering at which new assignments for ministers are made. Young Theron Ware makes the biggest sensation with an impressive sermon, but instead of the prosperous placement he expects, he is sent to the somewhat struggling church in Octavius, somewhere in Upstate New York. We soon learn that Theron and his pretty and vivacious wife Alice got into a bit of money trouble in their previous posting, and soon they learn that the trustees of the church in Octavius are a rather miserly bunch.

Theron's early months in Octavius are a bit of a struggle, thus. Along the way he makes the acquaintance of the local Catholic priest, Father Forbes, and his crotchety friend Dr. Ledsmar, and perhaps most significantly, Celia Madden, the beautiful daughter of the richest man in town. All these people introduce Theron to a rather more skeptical view of religion than any he has yet encountered. Theron's faith is rather swiftly threatened. And Theron is inappropriately attracted to Celia. Suddenly Alice seems less attractive to him than she had -- and her various acquaintances in Octavius take on a suspicious tone.

The troubled Methodist Church takes the step of hiring a couple of people to conduct a sort of revival service that turns into an attempt to force the church members to contribute additional money -- enough to settle the Church's mortgage and to give Theron a much-needed raise. The two people involved -- Brother and Sister Soulsby, a middle-aged couple, probably not techically married, former actors -- are among the most intriguing characters in the book, Sister Soulsby in particular. She is pragmatic and mostly good hearted, if a bit cynical, and it seems Theron might be saved. But he snatches defeat from the jaws of a sort of victory -- unable to regain his faith, unable to cynically pretend faith and keep his job, and fatally attracted to the beautiful, sensual, and artistic Celia.

The novel rather overtly sets up a conflict between what one might call small town "American" ways (and religion), and more cosmopolitan (Celia says "Greek"), more decadent even, ways (and religion), and also, in the person of Dr. Ledsmar, a more scientific view. And it doesn't necessarily insist on a right answer (though Theron Ware's inconstancy is surely wrong): Father Forbes, Dr. Ledsmar, Celia Madden, even Sister Soulsby (in some ways the "best" person in the novel, unless that's Alice Ware), all have obvious shortcomings.

It's by no means a perfect novel. Except for Theron Ware, and perhaps Sister Soulsby, none of the characters quite ring true. In particular, Celia Madden seems a construct created to lure Theron to his damnation -- acting at times (as do Father Forbes and Dr. Ledsmar) in a quite unmotivatedly malicious fashion. Alice Ware is far more sympathetic, but again her portrayal seems to vary depending on the requirements of the plot. But Theron Ware comes through quite perfectly -- a man who shines in a limited orbit and is revealed as quite inadequate outside of his native scope -- a selfish man, sometimes needlessly cruel, not very intelligent but only too convinced of his gifts -- and yet plausibly a man we are disposed to sympathize with at the opening, and even, really, at the end. I would say The Damnation of Theron Ware deserves its current reputation -- a "minor classic", undeniably a period piece, but a period piece that is worthy of examination, of continued reading.

(Oh, and by the way, just for the record, the Wikipedia entry for The Damnation of Theron Ware is pretty terrible.)

I'll note one more thing, having nothing to do with the novel, but illustrating an occasional feature of buying used books. This book, a Rinehart trade paperback from about 1960, was evidently owned by a student at Washington University (St. Louis' great private university). And this student (probably a woman based on the handwriting), didn't like the book, and especially didn't like Wash U. The marginal notes are often things like "I hate W. U." or "I hate this course!". Amusing.
Posted by Rich Horton at 9:11 PM