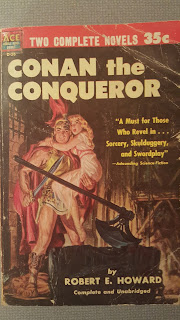 It's Thanksgiving so I don't have time to write something new, so I'm posting something I wrote a while back, about one of the most famous Ace Doubles ever. Doesn't really qualify as "Forgotten", I suppose, especially not the Howard. I sometimes worry that the star of the great Leigh Brackett is dimming just a bit, though. 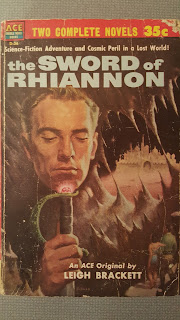 This is one of the very earliest Ace Doubles, from the first year any were published, 1953. It is also one of the most significant -- both novels are classics, both very important to the history of the field and both also still very enjoyable reading. The novels resemble each other in being classifiable as "Sword and Sorcery" (though I don't believe the term was coined for another decade or so). Indeed, Conan the Conqueror is surely one of the earliest exemplars of genre Sword and Sorcery -- in its way nearly as influential as Tolkien on its particular subgenre of Fantasy. The Sword of Rhiannon is nominally Science Fiction, and is set on Mars, but it is quite as Fantastical, quite as brimming with swords and with sorcery, as anything. And it is my feeling that Brackett, among her other virtues, was one of the purest conduits for Lord Dunsany's influence.

Conan the Conqueror is very long for an Ace Double, the longest I've seen at some 74,000 words. It is a reprint of a 1950 Gnome Press edition. The original story was published as "The Hour of the Dragon", a 5-part serial in Weird Tales, from December 1935 through March 1936. (The story is often dated 1935. including on the copyright page of this Ace Double, but the technical publication date should be 1936, as that is when the complete story was first available.) I have not seen the Weird Tales version (and I'm not likely to): I assume that it is substantially the same as this later version. (The Ace Double claims to be "Complete and Unabridged", but that may only mean relative to the 1950 hardcover.)

As the story begins Conan has been King of Aquilonia, a country of the ancient past of Earth, for some years, having risen from his origins as a Cimmerian barbarian and later a pirate to take over the country from a corrupt royal family. The deposed heir, Valerius, is plotting with the King of neighboring Nemedia, with a powerful Baron, and with a sorcerer to use a jewel called the Heart of Ahriman to raise to life a 3000-years dead mummy named Xaltotun, who was a powerful high priest in the evil kingdom of Acheron. With Xaltotun's help they will use black magic to vanquish Conan's army, and install Valerius on the Aquilonian throne, making Aquilonia a puppet of Nemedia.

And so indeed it goes. But Conan miraculously escapes death while his army is routed. Xaltotun has uses for him and takes him to Nemedia, but due in part to the lack of mutual trust between the various plotters, and in part to the help of a beautiful slave named Zenobia, Conan escapes and returns to Aquilonia. There he learns that despite the hatred engendered by Valerius's misrule, his people are too cowed by the threat of Xaltotun's sorcery to rise up. Fortunately, he learns that the Heart of Ahriman has again been stolen from Xaltotun, and that if he can claim it, his allies will be able to counteract Xaltotun's magic. So he sets off on a dangerous journey following the thief who has the jewel. Things aren't quite so simple, however, and Conan must track several changes of "ownership" of the Heart, as well as fighting off various attempts on his life. Eventually he makes his way to Stygia, and an encounter with another revenant mummy ...

I had never read Robert E. Howard before. He is really very much as advertised. The story is absolutely jam-packed with action, much very excitingly told. My plot summary above misses many twists and turns and fights -- the story does not go very long without some sword, knife or ax-work. The prose is vigorous but unrefined and at times silly (comparison with Brackett's prose is instructive -- both are pulpy and energetic, but Brackett achieves beauty at times -- Howard is often stimulating at the prose level but never beautiful). The plot is certainly coincidence-driven, but still holds the interest. The magic is of minor interest, not really very original. The worldbuilding is Xena-like: there is a mishmash of influences: for example, Aquilonia is faux-Roman, Stygia is faux-Egyptian. There are many sword-and-sorcery clichés here, such as the perhaps obligatory time spent as a galley slave (which shows up in The Sword of Rhiannon as well), but very likely Howard was originating some of these clichés, not stealing them.

It is what it is, most certainly with the faults of its pulp genre, but very successful on its own terms. Conan, I would say, earned his status in the field, and his many reprintings.

The Sword of Rhiannon is about 50,000 words. It is a reprint (apparently identical or nearly so) of "Sea Kings of Mars", published in the June 1949 issue of Thrilling Wonder Stories.

This is probably the most famous of Brackett's Martian stories, and justly so. It is different from her Eric John Stark stories (such as those paired in the Ace Double People of the Talisman/The Secret of Sinharat) in that it is predominantly set in the distant Martian past, when the planet was verdant and its seas were full. It still manages to evoke the sense of ancient mystery, and the sense of something wonderful now lost, that is so central to the other stories.

Matt Carse is a 35-year old archaeologist and thief, born on Earth but living on Mars from the age of 5. He encounters a true Martian thief in the old city of Jekkara, who shows him a great treasure, the Sword of Rhiannon, the Cursed One. Long ago Rhiannon, one of the human but very powerful Quiru, had sinned by giving forbidden technology to the serpent-like Dhuvians. For his crime he was imprisoned in a tomb while the rest of the Quiru left Mars for greater things. Carse realizes that the other thief must have found the entirety of Rhiannon's tomb, and eager for more riches he forces the other to take him there. But Carse is betrayed, and he ends up pushed into a mysterious black sphere, from which he emerges into a different Mars.

Hardly believing what has happened to him, he is soon imprisoned by the agents of Sark and their warrior princess Ywain. He and a chance-met fat thief named Boghaz are sentenced to be galley slaves on Ywain's ship. But Ywain recognizes his sword, and she and the sinister Dhuvian accompanying her soon try to extract the secret of Rhiannon's tomb from Carse. Only something unique about Carse -- his Earth heritage? or perhaps the dark voice clutching at the back of his brain? -- allows him to resist, and eventually lead a mutiny. Carse is able to lead his fellow slaves back to the Sea Kings, free rivals to the empire of Sark. But even there, he is not trusted. The lovely Emer, who consorts much with the Sky people and Sea people of Mars, senses something sinister in Carse. And when his offer to reveal the location of Rhiannon's tomb leads to disaster, only a desperate strike by Carse can save the people of Mars from the oppression of the Dhuvians. And Carse must still confront his fears of the presence lurking in his brain ...

It is really wonderful pulp Sword and Sorcery, pitch perfect, beautifully written, twistily plotted. The resolution is deeply romantic, with a shadow of true sadness. Yes, the plot itself depends on some coincidence, and some implausible action -- but so goes the form. The characters are two-dimensional, but highly colored -- if it is hard to believe in Ywain, and her combination of villainy and bravery and loveliness, or Carse's bluntness and untrained heroism and crude sexiness, still we like to make ourselves believe. And the prose -- purely within the pulp tradition, but using that tradition to produce real beauty: "Lean lithe men and women passed him in the shadowy streets, silent as cats except for the chime and whisper of the tiny bells the women wear, a sound as delicate as rain, distillate of all the sweet wickedness of the world.", or "Now, over the bones of Mars, Carse could see the living flesh that had clothed it once in splendor, the tall trees and the rich earth, and he would never forget. He looked out across the dead sea-bottom and knew that all the years of his life he would hear the booming roll of surf on the shores of a spectral ocean." Mariner stole that from us, I suppose, and Kim Stanley Robinson showed a differently beautiful Mars -- but I will always love Brackett's Mars, the purest SFnal Mars of all.