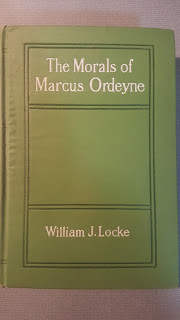 Returning again to the very center of my vision for this blog, books that were huge bestsellers sometime in (mostly) the first half of the past century. William J. Locke was an immensely successful popular writer in the first couple of decades of the Twentieth Century, with novels in the Publishers' Weekly lists of ten bestselling novels of the year for 1909, 1910, 1014, 1915, and 1916. The Morals of Marcus Ordeyne didn't make that list, but it was his first major success, appearing in 1905 when the author was 42 and had been publishing for over a decade.

Locke was born in 1863 in Barbados, to English parents. He was raised mostly in England and in Trinidad. He attended Cambridge, studying Mathematics, despite his dislike for the subject, which he called "that utterly futile and inhuman subject". He became a schoolmaster, though apparently he was not happy in that profession. His first novel, At the Gate of Samaria, appeared in 1894. Despite his extreme popularity in this life, I feel fairly confident in declaring him nearly forgotten, but perhaps not entirely: one of his short stories was made into a film as recently as 2004, Ladies in Lavender, starring Judi Dench and Maggie Smith. (The book at hand, The Morals of Marcus Ordeyne, was made into at least three films, two silents and one talkie, the latter in 1935 starring Ian Hunter and Lupe Velez.)

The Morals of Marcus Ordeyne opens with the title character announcing his intention to recount the history of his "extraordinary adventure" mostly by transcribing his diaries. He begins by telling of the seventh anniversary of his "release from captivity" -- that is, the time when he was able to resign his hated position as a schoolteacher of mathematics, due to the death of most of his relatives, at which time he became a baronet, now Sir Marcus Ordeyne, and inherited a modest fortune. Since then Ordeyne his lived a quiet and well-ordered life, working on a scholarly book about the history of Renaissance morals, contributing occasional articles to scholarly publications, and visiting his mistress Judith Mainwaring. (Whether his and Judith's relationship is sexual is a question politely dodged by the book, though on balance I suppose it is.) Occasionally he is importuned by his relatives to marry, in order that the title can be passed on to future generations, but he sees no benefit in such an action.

All this changes one day when he stumbles across a very young woman, Carlotta, weeping in a London park. It seems she has been abandoned by the young man she ran away with ... from Alexandretta, in Syria, where she was the stepdaughter of a Turkish official, her English mother's second husband. Her Turkish stepfather meant to marry her to an unpleasant old man, so she ran off with a foolish English man. And now she has nowhere to go.

Marcus, seeing no alternative, takes her home. But soon he is at a loss as to what to do with her. He cannot take her to his relatives -- too much scandal. Judith wants nothing to do with her -- indeed, she is quite jealous. But Marcus' butler and his French cook quite take to Carlotta, and before long the story is looking rather like its near contemporary, George Bernard Shaw's play Pygmalion. Carlotta is taking instruction from a governess sort ... but she is also declaring her intention to marry "Seer Marcous", as she calls Ordeyne. But Marcus is not convinced the girl even has a soul -- and anyway, he has no intention of ever marrying. Besides, there's Judith.

Things come rather to a head when Carlotta's stepfather shows up in London ... and other complications ensure. There is for example Marcus' friend, and former student, Pasquale, who all of a sudden seems rather more interested in Carlotta than is appropriate. And of course there is the question of Judith Mainwaring, who has been conveniently away in Paris for a while. Various questions need an answer: Does Carlotta really love Marcus? Can she love anyone? Why have Judith and Marcus never married? What is Judith's dark secret? And where does Pasquale fit in? And is Carlotta's stepfather a real threat?

All is worked out, in the end, more or less as one might have guessed from the start, but not without some tragedy, and some true maturation, not just for Carlotta, who is clearly and understandably immature, but for Marcus, and for that matter for Judith. The ending is not a surprise, then, but the route to it is interesting enough, and fairly effectively deals with some knotty issues, most importantly perhaps Marcus' treatment of Judith. (Though there is a whiff of convenience about the way some things work out.)

I really quite enjoyed the novel, though with obvious reservations. One of these is the blatant Orientalism of the portrayal of Carlotta's stepfather, and of the way she was brought up. The other reservation is one that applies to many popular novels -- the generally happy ending is facilitated in great part by some pretty fortuitous events. But those aside, it's a fun read. The main character's voice is ironic and amusing. The moral issues at the heart of things are resolved with some acknowledgement of their force. And, yes, I like Sir Marcus and Carlotta, and I rooted for them.

(I'll add a small personal note -- this is the novel I was reading as I sat vigil at my father's deathbed. I can only place one other work in a similar context -- I was reading Wallace Stevens' long poem "The Comedian as the Letter C" in the hospital while my wife was in labor with my daughter.)
Posted by Rich Horton at 9:42 PM